You are at:Home»Latest»Photo: Large police presence at Celtic Park today

CELTIC face St Johnstone today in the SPFL Premiership, kicking off at 3pm. However, given the reluctance of the Scottish Gov to allow fans to return it was a peculiar sight seeing the masses of police gathered at the stadium but they are not for facilitating the safe entry to the stadium, they are there to stop supporters congregating to voice their dismay at the way the club is being run. 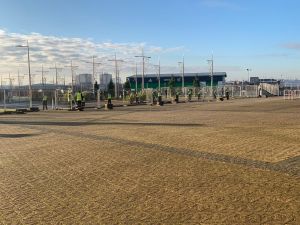 Stadium is surrounded, a lot in unmarked cars in side streets. What a mess. This is what Lawwell and co have brought to our club. pic.twitter.com/94WXgWCbzM

Just been sent a picture of Celtic park… what a waste of resources and money! I hope no one shows up today just to show the mockery this police state country is turning into ! pic.twitter.com/sXjRScOV9P

Police presence persuded me against trying for a fun photo with the new Celtic Da Fence pic.twitter.com/5v22aAxq1l

Easily 25 plus police vans up at Celtic park. Total overkill. Police have been emboldened by the words and actions of the Celtic board.

slow hand clap for the Celtic board. created a narrative that the club faced an existential threat of fan opinion today and called in the cavalry https://t.co/odhemx6fht pic.twitter.com/QvnplFmUZe

The Celtic board have manufactured this unrest themselves by their continued silence and contempt towards the support, treating them like customers first and fans second. Neil Lennon has been allowed to hang in the wind with the club neither explicitly backing him or deciding to part ways with the manager.