You are at:Home»Latest»Photo: Mikey Johnston pokes fun at Celtic teammate in hilarious post

Mikey Johnston has had a good few days, the winger made his return to the Celtic team and helped seal the Quadruple Treble. The youngster scored his penalty in the shootout and is hoping to be a part of the team that plays Ross County at Celtic Park tomorrow night.

However, Johnston has taken to social media to take a dig at his Celtic teammate Ryan Christie in a hilarious Instagram story post. 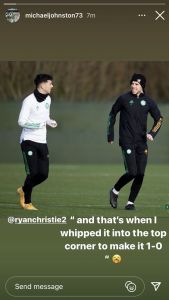 Christie scored the opener versus Hearts but missed his penalty in the shootout. With that said, his opener was a screamer. It was probably worthy of telling everyone you know more than once and it appears from what Johnston said that Christie has been relentless in telling people about his goal.

If I had scored that goal in a Cup Final, I would do the same.

Both Johnston and Christie will be hoping to continue Celtic’s return to form with an emphatic win over John Hughes’ Staggies tomorrow night.