CELTIC are due to partner up with Adidas ahead of the 10IAR season and supporters are eagerly anticipating the launch. The home top and third kit have been leaked but the away kit had thus far been unseen. Until today when a leaked photo of the club’s photo shoot for the kit promotion was leaked.

TamSelleck on Twitter released the photo and supporters have given it overwhelming praise as it is the first time all the kits have been seen. 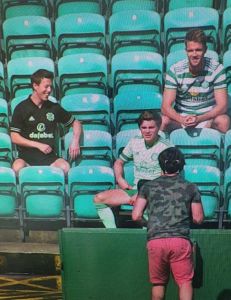 James Forrest is seen in what appears to be a white /lime green top with the green three stripes of Adidas and it will be a certain hit with the Celtic support. With dark green shorts and the light, some are speculating that it is a Love Street 1986 inspired kit.

We should wear that lime green effort against Hearts

The black magic kit returns, as modelled by Callum McGregor, as the third kit whilst the green and white Hoops is adorned by Kris Ajer.