You are at:Home»Latest»Photo: Superb Celtic monument goes viral on Twitter

Celtic have had the safe standing materials and procedures in place for many years now, although it never comes close to the relic that was The Jungle.

Having been implemented in 2016, Celtic made history by becoming the first club in the United Kingdom to install rail seating, as part of a response to developing a long-term continuation of the feat across the British nations.

It has been great so far, don’t get me wrong – but as good as 3,000 boisterous fans sound when they’re in the depths of the North Curve, it doesn’t quite compare to the Jungle that Paradise became synonymous. 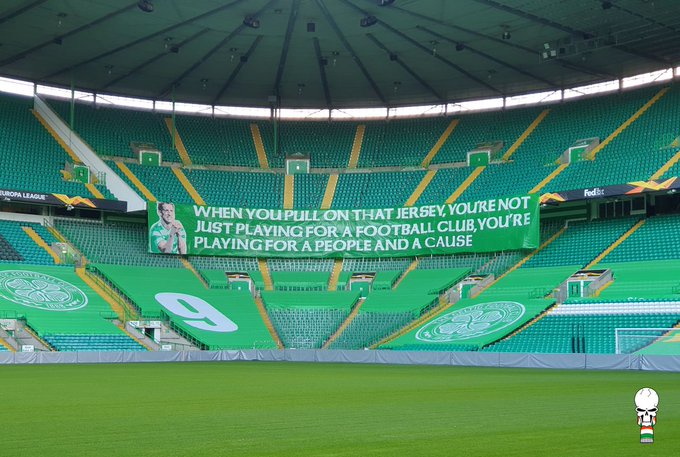 Boasting a prominence at Celtic Park for 28 years, the Jungle quickly became one of the most impressive stands in the footballing world, never mind Europe.

Fans would give anything to return to the old ways, but unfortunately the Taylor Report following the Hillsborough disaster saw to that — and will mean that the Jungle will never return.

With many Celtic fans of a young age and the plenty that will follow guaranteed to have no recollection or reminders of the famous stand, there is a tinge of sadness that resonates around this fact.

However, Tommy Cummings, a Celtic fan from Coatbridge, stands out from the crowd in this remark

Celtic fan Tommy updated his Twitter on Sunday morning to announce to the Hoops faithful that a Jungle stanchion donated to him by a friend had been installed in his garden, garnering many likes and jealous (in a good way!) comments about how lucky he was to have a literal piece of complete Celtic history at his fingertips.

My most treasured item, a stanchion from The Jungle Celtic Park gifted to me from my late very great friend Robert Murphy eventually takes its prominent position in the garden. 🍀😁👍 pic.twitter.com/WAhhsH5iw1

It may not be the ball Tony Watt scored with against Barcelona or Shinsuke Nakamura’s signed shirt from the 1-0 win over Manchester United – but in terms of permanent Paradise relics, we think Tommy comes close to top spot.