You are at:Home»Latest»Photos: Foreign Celts pay tribute to Scottish teammates after EURO 2020 qualification

SCOTLAND sealed their progression to the Euro 2020 group stages with a 5-4 penalties win over Serbia after a 1-1 draw in 120 minutes on a rainy night in Belgrade. There is something to be said for paying tribute to your teammates after a fine win, expressing your pride in their achievements but there is something to be said for doing so if their success was at the expense of your own. With Hatem Abd Elhamed and Nir Bitton, that is the case. The Israeli pair were on the losing side of a penalty shoot-out but that didn’t stop them congratulating Scotland on their win, in a show of solidarity with their teammates and class. 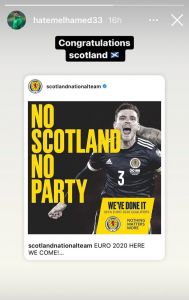 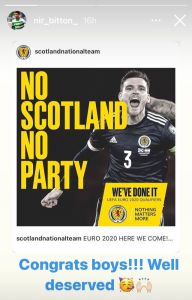 French central defender, who is working back from injury, Chris Jullien also paid tribute to the Scots in an instagram story post. 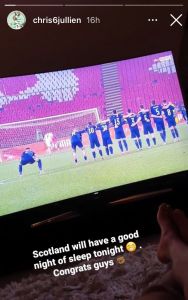 Ryan Christie and Callum McGregor were standouts for Scotland with Leigh Griffiths scoring his penalty as well. Hopefully their teammates come back from Scotland duty without any injuries or illness and Celtic can hit the ground running when they get back to domestic duty next weekend versus Hibs.