John Hartson was never one to walk away from controversy on the park but now that he is off the pitch, the big Welshman is at it again. This time, he has weighed into the argument about the Christopher Jullien goal that decided Sunday’s League Cup final.

Many Rangers fans have complained and moaned that Jullien was in an offside position when he scored with Celtic’s only shot on target. Brilliantly, ‘Big Bad John’ has taken two digs at the Ibrox fans with two examples of how poor offside calls have been in the past, to the benefit of Rangers.

The first came in March 2003 when Celtic were beaten 2-1 at Hampden in the League Cup final. Henrik Larsson scored Celtic’s goal, but John Hartson scored another goal which was chalked off erroneously for offside. It was an ‘Honest Mistake’. Hartson also missed a penalty and near the end Neil Lennon was sent off. 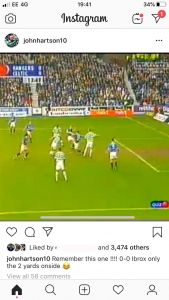 The pair of incidents will further than antagonising the blue masses, who felt robbed despite the scoreline reading 1-0.