You are at:Home»Latest»Police Scotland confirm no major disorder after city centre title party

Celtic’s 6-0 win over Motherwell was rounded off with the presentation of the Premiership trophy to the Champions of Scotland. The players, management and their families took in the occasion before returning up the tunnel while fans made their way back into the city centre.

The Trongate and Merchant City were occupied by thousands of Celtic fans who soaked up the occasion. A tenth title in eleven years, an enormous achievement considering where the club were a year ago. Especially after lockdown(s), fans made their way to celebrate the triumph just like they did following the Treble Treble success in 2019. 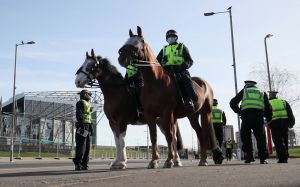 Police Scotland, who were subjected to vile abuse a year before in George’s Square, posted a statement regarding the gathering of thousands of fans and stated that there was no major disorder.

“Police Scotland is a human rights-based organisation that puts our values of integrity, fairness, respect and a commitment to upholding human rights at the heart of everything we do.

“This afternoon thousands of Celtic supporters gathered in the area of Glasgow Cross to celebrate their team’s achievement. A proportionate policing plan was in place which facilitated the gathering, prioritised public safety and sought to minimise disruption to businesses and communities.

“While there was an unacceptable level of anti-social behaviour and littering there were no serious incidents or disorder.

“There were some outbreaks of minor disorder and our officers acted swiftly and robustly to prevent escalation and protect safety. Over the course of the evening there were six arrests for offences including assault and acts of public disorder. A further four people were issued with fixed penalty notices.”

Compare and contrast that with the scenes of devastation that Glasgow was subjected to last year after Rangers won their first title. The Trongate was also tidied up this morning and fans did well to self regulate, despite some small incidents that the Police highlighted. Over a year ago, riot Police were deployed to the city centre of Glasgow to deal with the scenes of devastation that had been created by Rangers supporters.