You are at:Home»Latest»Possible Celtic Windfall as Real Madrid Eye Frimpong

Former Celtic right-back Jeremie Frimpong has been linked with a big money move to Spanish giants Real Madrid. Frimpong, 20, moved to Celtic from Manchester City in 2019 for a small fee and went on to quickly become a mainstay in Neil Lennon’s Celtic side as we won our ninth Scottish Premiership title in a row. The youngster’s talent was there for all to see and it wasn’t long before teams came knocking. 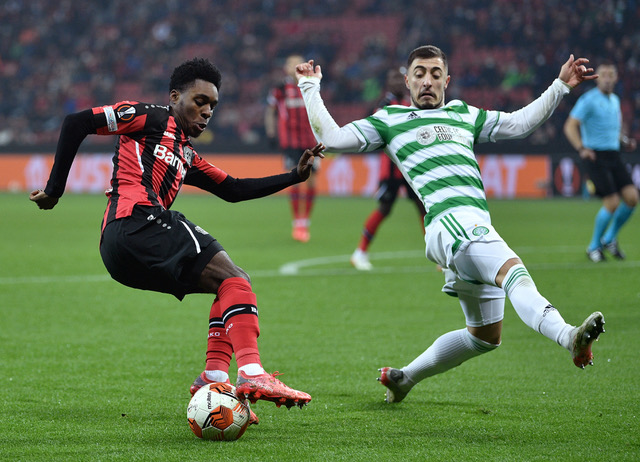 Jeremie Frimpong  is challenged by Josip Juranovic during the UEFA Europa League group G match between Bayer Leverkusen and Celtic FC at BayArena on November 25, 2021 . (Photo by Lukas Schulze/Getty Images)

Bayer Leverkusen were the first to take the chance and put their money on the table for the precocious talent. Last January they signed the diminutive Dutchman for a fee believed to be in the region of €11.5 million. There was a fee to be given to Man City after the fact however, as they had inserted a sell-on clause in the deal that took Jeremie to Glasgow in the summer of 2019 – much like the ones Celtic have benefited from and are most likely to have in the deal that took Frimpong to Germany.

Now a report in the Spanish media site Diariogol has claimed that Real Madrid are looking to sign the defender as back-up to Dani Carvajal who is played constantly at right-back for the Galacticos due to their being no cover for the Spaniard. It also states that the likely value would be something like €15 million, although you would expect that Leverkusen would want a significantly higher return on a player they just signed a year ago, maybe around €30 million? And that would mean Celtic would do very nicely out of such a development. Let’s hope it happens! 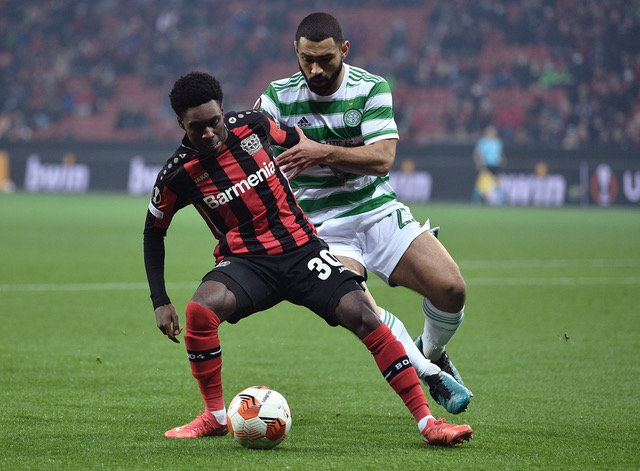 Jeremie Frimpong is challenged by Cameron Carter-Vickers during the Europa League group G match between Bayer Leverkusen and Celtic FC at BayArena on November 25, 2021.. (Photo by Lukas Schulze/Getty Images)

The fact that Jeremie is being touted for Real Madrid is both testament to the players ability to adapt his game and Celtic’s culture of breeding winning into footballers. If the move does go through it would be an astounding move for the player and a tip of the hat in Celtic’s direction for preparing him for the highest level in European football.

We just hope Jeremie never forgets who gave him his big break in the game.

John ‘Yogi’ Hughes “joins the ranks of those will be immortal as long as there’s a Glasgow Celtic”
“I have to be strong enough to make the decisions,” Kyogo
Toulouse admits defeat in pursuit of Celtic goal hero Stephen Welsh
Previous ArticleA Message to the English Media – Why Rod Stewart supports Celtic
Next Article Celtic join world’s top clubs in producing Adidas Teamgeist Collection