You are at:Home»Latest»Postecoglou shoulders blame for lack of recruitment as he hopes for reinforcements

Ange Postecoglou has wrongly shouldered the blame for Celtic’s extra-time defeat to FC Midtjylland. The Australian manager suggested that maybe he didn’t stress the importance of new bodies enough to the Celtic hierarchy, resulting in a threadbare side competing for the place in the Third Round of The Champions League.

As reported by The Sun, Postecoglou admitted that he had been making the same points since he arrived at the club regarding recruitment but not enough had been done.

“Maybe I wasn’t clear enough – I don’t know. I think I’ve been pretty consistent in saying we need more players in.

“The club’s working hard to get those players in. We talk endlessly about the challenges we face but again for our supporters they just want to see us bring more reinforcements in that we need.

“I’ve just got to reinforce my views on it as strongly as I can.” 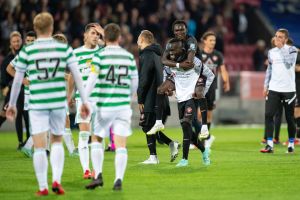 Celtic have added Liel Abada, Kyogo Furuhashi, Liam Shaw, Osaze Urhoghide and Carl Starfelt but the squad was still threadbare given the amount of players that left in the summer as well as the quarantine required when arriving in the UK. The manager, however, is hoping for more reinforcements ahead of Saturday’s trip to Tynecastle.

“At the moment, even to get one in will be an enormous help for us. We’ve had a really challenging pre-season.

“We haven’t had a full squad score together for a variety of reasons with internationalists coming back late and people leaving the club.”

Celtic have been linked with left-winger Kristijan Lovric in a £4.2m deal, Tottenham’s Joe Hart as well as Aurelio Buta from Royal Antwerp for £3m. However, none of these deals have moved beyond ‘talks’ and the club have to look forward to Europa League football for a fourth consecutive season.

Celtic have also been hampered by very public transfer sagas playing out with Odsonne Edouard and Kris Ajer both subject to fierce speculation about potential moves. Ajer was moved on but Edouard remained and his performance last night looked as if he was not fully committed to the cause. Having seen him at his breathtaking best, it was sad to see him make the Midtjylland defence look far better than they were.