You are at:Home»Latest»Predicted team for Celtic vs Ross County – Ntcham set to miss out

Finally the international break is over and we can get back to the real stuff. It’s been a long two weeks to try and forget about the result against Livi, so only a thumping home victory over Ross County will do.

On paper this should be a fairly routine home win. Expect County to play some nice stuff and possibly threaten going forward with some brave play, but they leave themselves wide open at the back and look capable of conceding plenty every game.

Ryan Christie is obviously suspended so it looked like the perfect chance for Olivier Ntcham to stake his claim for a regular place. Unfortunately an ankle injury picked up in training seems to have ruined that.

With that in mind, here’s a look at an expected line up for Neil Lennon today: 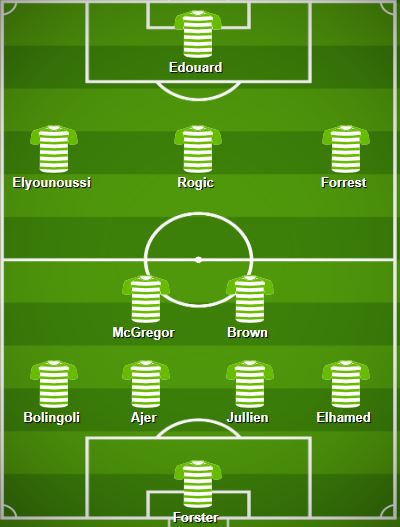 With the Lazio game next week it’s important to try and get as many first team players back in the swing of club football and playing together. It might be tempting to rest some but there’s plenty of time to recover before Thursday.

Eddy has been phenomenal for the French U21 side so you have to give him the chance to keep that run going. He’s scoring goals for fun so it would be surprising if he doesn’t find the net today.

The back four and midfield two is the same one you would expect to start against Lazio as well. A clean sheet is important to build confidence and show the opposition they can’t expect to score against this side.

Elyounoussi and Rogic are the two who are playing to really try and establish themselves in the team. You expect Christie will return for Lazio so a great performance from either of them today could see them retained for Thursday too.

Ntcham is still rated as doubtful so might make the bench, but it would be a surprise to see him playing.

Previous ArticleAwful timing for Celtic star as training ground injury could scupper chance to impress
Next Article Tom Rogic, ‘Out of Sight, Out of Mind – No Longer,’ Niall J