You are at:Home»Latest»Premier League clubs chase Edouard bargain but Celtic do not need to sell

NEWCASTLE UNITED are on the verge of a multi-million pound takeover, which would make them one of the wealthiest teams in English football and are preparing to launch an assault on the transfer market in the coming months with Odsonne Edouard being touted as a target. The Express claim that the club’s potential owners have eyed a move for the Frenchman as they look to prepare for an assault on the Top 4.

Ian McGarry, a transfer expert, told The Transfer Window podcast that Newcastle see Edouard as a sensible investment, should they complete their takeover. Arsenal have already been cited as being interested in the 22-year-old; however, Celtic arguably do not need to sell their star at the present time.

“He has been attracting interest from a lot of clubs, mainly in the Premier League but also in Europe as well.

“There is interest from Newcastle United who are determined to make sensible investments regarding player recruitment rather than using the scattergun approach which other Premier League clubs who have been taken over and invested in by nation states or indeed wealthy individuals.

“Edouard is valued at £40m by Celtic but of course in this current market they’re unlikely to achieve that kind of figure for the player.

“Newcastle are still waiting for their takeover to be confirmed by the Saudi Arabia Public Investment Fund but are very keen to take Edouard, partly on the basis that he is someone who wants to play football every week, he and his representatives have stated to interested parties that he doesn’t want to go to a club where he will be second or third choice, he wants to develop his career in a very constructive and progressive way.

“Money is not the be-all and end-all at this stage in his career and also obviously a move from Glasgow to Newcastle for the France striker would not be as much as a shock I suspect.” 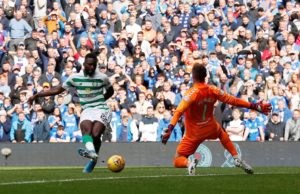 Edouard has scored 28 goals in 45 appearances this season and whilst a figure quoted at £40m has been touted, Celtic wouldn’t receive anything like that in the current economic climate as it becomes a buyers market. Clubs with deep pockets, like potentially the new owners of Newcastle, will hold the cards and be able to lowball clubs desperate for cash amidst the financial crisis caused by COVID-19.

Edouard has two years remaining on his current deal at Celtic and Neil Lennon has already spoken of his desire to tie down Edouard for at least another addition year. This would maximise the sale of Edouard when the time comes as well as giving Edouard the task of being talisman as Celtic push for 10IAR.

Celtic offer a unique opportunity for players to compete for silverware whilst dealing with the expectation of winning every week. Edouard has benefitted from Europa League campaigns with Celtic but the opportunity to spread his wings in the Champions League must surely be tempting, as well as the coveted 10IAR.

Virgil Van Dijk spoke this week of what he learned in his time at Celtic, with the winning mentality a major unique selling point for the Scottish Champions, this experience is vital to consider as well as the exposure to European football.


Edouard’s compatriot, Moussa Dembele, left the club for a mere £20m after forcing a late move through to Lyon and may potentially move on this summer – netting Celtic a sell-on fee. The market to sell Edouard has changed considerably from February, when Neil Lennon may have claimed £40m for his star striker; however, as a result of COVID-19, it is anyone’s guess how much the club could be offered.

Whilst the club may face a degree of financial turmoil, Peter Lawwell and Lennon may be tempted to sell Kris Ajer, who is the subject of interest from Leicester City and AC Milan. Although any move to sell a valuable asset at below the market value would be unwise – even given the financial crisis.