You are at:Home»Latest»Premier League side preparing offer for Celtic’s Odsonne Edouard

Brighton are looking to strengthen their squad by signing Celtic’s Odsonne Edouard using the funds from the £50m sale of Ben White to Arsenal. The Seagulls are reportedly willing to pay more than the £18m that Leicester City had offered earlier this summer.

According to the English newspaper The Daily Express, Edouard is a target for Graham Potter as he looks to build on an impressive debut season in the Premier League.

This could mean that Celtic can cash in on the attacker as he enters the final year of his contract. Celtic will not want to lose the player on a free agent next summer but if they do not get a price that is representative of his value and the player is willing to stay, it would be foolish to sell for the sake of it.

Despite a quiet season by his standards, Edouard scored 22 goals and bagged 6 assists over the course of the season. He was starved of quality assistance and often cut a dejected character as the season ended in misery. He would certainly be interested in a move to the Premier League but given the experience of playing in Europe and competing for trophies, he may have his sights set higher than Brighton. 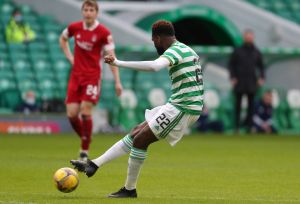 The Glasgow club should be looking for around £25m (including add-ons) for their prized asset with Brighton actually picking up a bargain when you consider some of the fees in English football.

With 55 league goals in three seasons, Edouard has proven himself to be an excellent operator and his goals will be hard to replace. Although, the club have signed Kyogo Furuhashi as a replacement for Edouard. Furuhashi will join up with Swiss striker Albian Ajeti. Ajeti appears to be a different type of player than the all-rounder that is Edouard, the ex-West Ham attacker looks to be more of a poacher. Leigh Griffiths, meanwhile, is said to be a target of Sunderland FC as the club probe alleged inappropriate online behaviour by the 30-year-old.