You are at:Home»Latest»Premiership Player of the Month Jota on the two things he has learned playing for Celtic

Jota spoke to the media today after being named the Cinch Premiership Player of the Month for October following a string of impressive performance for the Treble chasing Hoops.

The 22-year-old, who joined Celtic on a season-long loan from Benfica, has already scored six goals in 15 appearances, which included two in October – against Aberdeen and Motherwell respectively.

🔥 Jota has been named #cinchPrem Player of the Month for October following a string of impressive performance for the Hoops! 🏆

Ange Postecoglou’s side enjoyed a good run of Premiership results throughout October, with four wins and just one draw, and the Celtic manager was last week named Manager of the Month.

Now Jota has made it a Celtic double for October with the Player of the Month award, and the Portuguese star has continued his good form into November, scoring three goals so far and helping Celtic reach the League Cup final where Hibs await.

There’s plenty of questions being fired at Jota here about his future but there’s no suggestion one way or the other that he’s made his mind up on staying at Celtic for the long term. This is the first time in his career that he’s been playing regularly with two starts every week and he talks about the two things he’s learned as a result of this.

“I always say to myself, it’s easy to come to this level, but it’s hard to maintain.

“This is the first time I’ve played regularly, which has been really good, but I don’t want to stop here and I want to create more and be a better player.

“Celtic is a massive club with difficult objectives, but we must always think high. It’s been a good journey and the lads have been really good with me and the expectations are really good, so I just want to keep improving and learning with the coach. 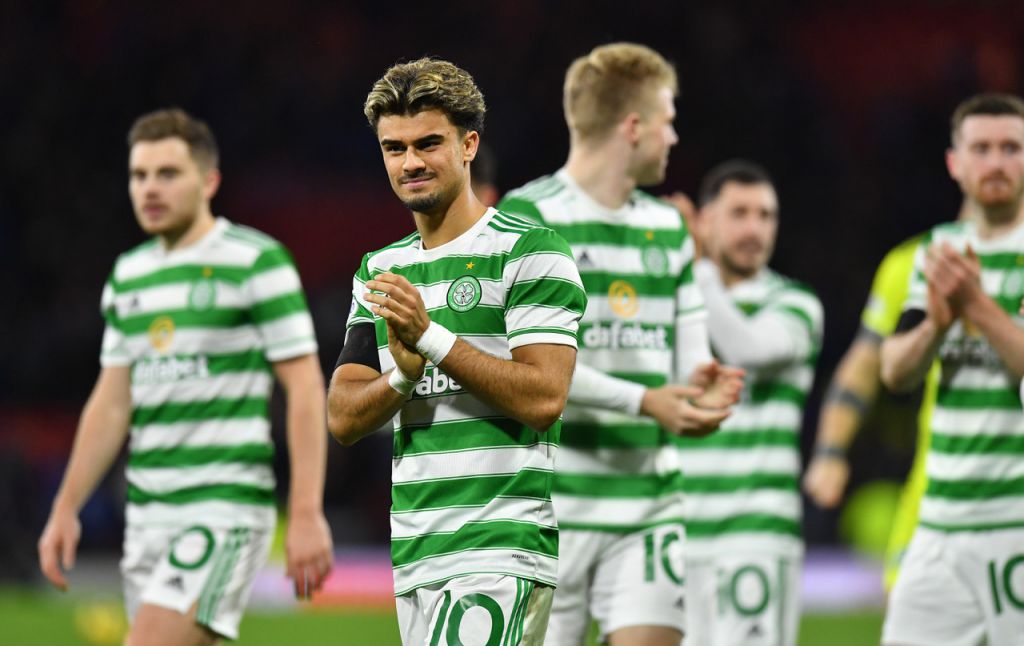 Jota of Celtic applauds fans after their sides victory in the Premier Sports Cup semi-final match between Celtic and St Johnstone at Hampden Park on November 20, 2021 in Glasgow, Scotland. (Photo by Mark Runnacles/Getty Images)

“I came from Portugal, which is a sunny country so it’s different! But the football is the main thing, so give me the ball and the pitch and I’ll be happy.

“In Benfica, we were used to winning every game – if we didn’t win one game, we were in trouble.

“It’s the same responsibility here, as you have to win every game and that’s what we are trying to do. The philosophy, idea and process are all there, so we just want to enjoy our game and do the best.”

🎙️ “This is the first time I’ve played regularly, which has been really good, but I don’t want to stop here and I want to create more and be a better player.”

The #cinchPrem October Player of the Month, Jota, spoke to the media today to discuss his award.#COYBIG 🍀

Congratulations to @CelticFC‘s Jota who has been presented with the @cinchuk Premiership Player of the Month award for October!#cinchPrem pic.twitter.com/duv3P0c6jX

The 22 year old has been directly involved in twelve goals since joining the club in August.pic.twitter.com/XRV7CA5IBh

Previous ArticleMr Celtic – What it means and a shortlist of those deserving of such acclaim
Next Article Video: Ange Postecoglou meets Open Goal