St Mirren legend Tony Fitzpatrick has said that Dylan Reid has made the right decision after rejecting the chance to move to Celtic. The 17-year-old was a target for Celtic’s B Team but the player has decided to remain in Paisley after manager Stephen Robinson promised first-team football to Reid.

Speaking to Renfrewshire Live, via Record Sport, the former Buddies star-turned-Chairman praised the qualities of Reid and said that he has made the correct choice in opting to remain at the Premiership side.

“Reid has got power, pace, intelligence and technical ability.

“I remember watching him coming through the different youth age groups in the academy and thinking ‘this boy will be a special player’.

“He’s got a top mindset as a footballer and off the pitch. A lot of kids would run to the bright lights and a lot of them disappear.

“But he’s single-minded when it comes to his football and he’s made such a sensible decision. 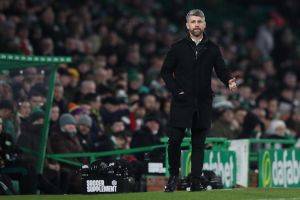 “He’s not just diving in to a club like Celtic or Rangers when he’s not ready to challenge to get in their first team.

“I’ve no doubt he’ll move on at some point down the line, but it will be when it’s the right time for him.

“When he played against Celtic last season he was up against Tom Rogic, who was on fire at that point, in very difficult circumstances but he took care of him that night.

“Reid sees he’ll get opportunities here and he knows his future is bright here. He wants to show people what he can do.

“He’s captained Scotland through the age groups so far because he’s a leader. I’ve always thought he’ll be a future Saints captain.”

It was a no-brainer really for Reid as he would have been forfeiting the opportunity to play regular first-team football in Scotland’s top league for the fifth tier. Admittedly, he would miss out on the facilities that Celtic have to offer as well as the chance to break through into the first team.

Celtic will likely keep a close eye on the player’s progress and revisit their interest if the player makes the strides that he is expected to. Karamoko Dembele proves that despite having all the talent, sometimes it doesn’t work out and first-team football is required.

You would have to think Celtic considered purchasing the player and loaning him back to St Mirren but the player has made his decision and we can track his progress from afar until he faces Celtic.