You are at:Home»Latest»Pundit thinks Newcastle will beat Bayer Leverkusen to Kris Ajer’s signature

Kris Ajer is a man in demand. The 23-year-old has just one year remaining on his Celtic contract and recently signalled his intent to leave the club this summer. Now, former Everton striker Kevin Campbell thinks that the lure of Newcastle United will lead to the Norwegian International snubbing interest from Bayer Leverkusen.

Campbell told Football Insider that he thinks a deal will be done for Ajer to leave Celtic to join Steve Bruce’s side, who finished 12th in The Premier League last year.

“The lure of Newcastle, who are a big club, is going to be a bit too strong I think. Ajer, like the majority of players out there, wants to play in the Premier League. It is a big draw.

“I am pretty sure that one is going to happen. From what I hear from people in the game, he has made his intentions quite clear.” 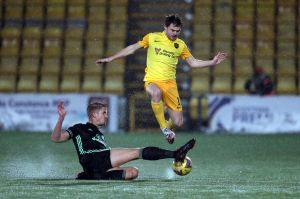 Ajer has the makings of a really top player. He scored the penalty that sealed the Quadruple Treble and won Players’ Player of the Year last season but showed defensive frailties over the course of the campaign. He is an intelligent defender that has bags of untapped potential but he clearly sees himself in a ‘Top 5 League’ after a successful spell at Celtic.

The player has also been linked with Premier League new-boys, Norwich City but Leverkusen remain in talks with Celtic over a potential deal worth £16m (Sky Sports).  A move to a side with a lot of possession would likely suit Ajer’s strengths and a bidding war can only maximise the value of the player this summer. Leverkusen and the Bundesliga is the best outcome for the player, with former partner Dedryck Boyata at Hertha Berlin and Jeremie Frimpong also at Leverkusen.

Ajer joined Celtic from IK Start in 2016 for £500,000 as a midfielder; however, Brendan Rodgers retrained the youngster as a central defender and he went out on loan to prove his worth. The Norwegian became a first team regular striking up a partnership with Dedryck Boyata and impressing in the centre of defence. He has since gone from strength to strength only to plateau this season, likely because of the quality of players around him in defence.

If the figure quoted of £16m is correct, this would represent quite decent business for the club but the fact that top talents Edouard, Christie and Ajer are all entering their final year without signing an extended deal, proves how poor the decision making at the club has been in recent times.