You are at:Home»Latest»“Racism continues to be swept under the carpet,” Celtic Supporter’s Open Letter to First Minister, Nicola Sturgeon

Jerry Woods, author of the wonderful Celtic book to Lisbon and Back on a Fiver, has this morning sent an open letter to Scotland’s First Minister Nicola Sturgeon and has requested that we publish this on The Celtic Star so as to allow as many Celtic Supporters the opportunity to read the letter and perhaps for some to follow Jerry’s lead and contract either the First Minister or your local MSP on this matter.

We have also included numerous social media posts on this subject after the disgraceful scenes ahead of yesterday’s Glasgow Derby at Ibrox. Many of those who took part in that walk will be included within this photograph… 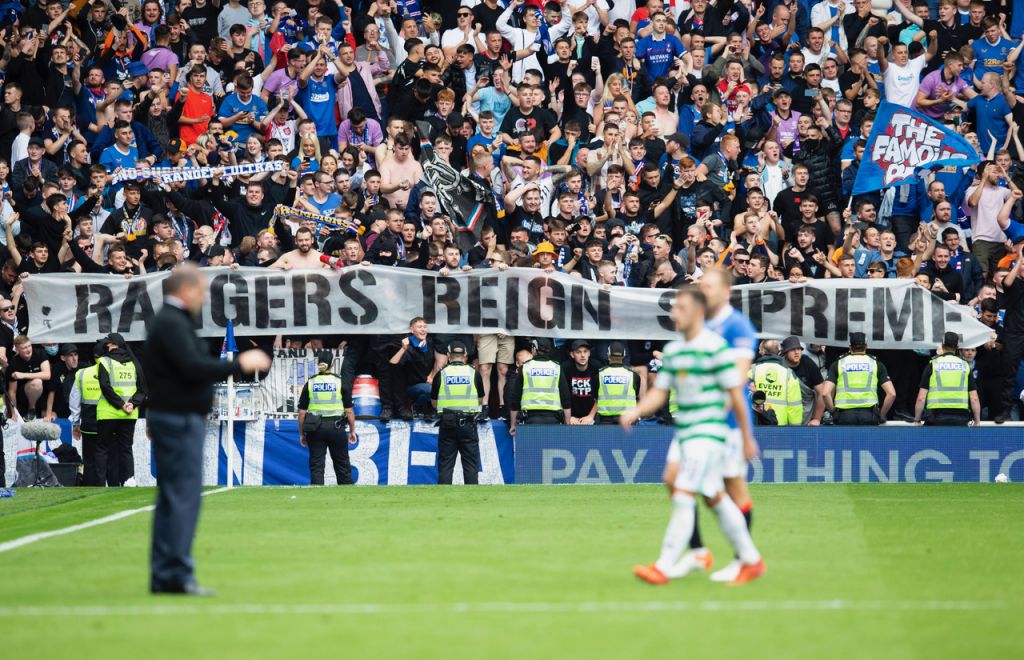 I am a proud Scot.

My political perspective is irrelevant, however in the spirit of transparency I am a supporter of Scottish Independence.

As indicated, I am a proud Scot, but also one of Irish descent. This heritage is equally important to me.

My grandfather was an Irish immigrant from County Kerry. He was never formally educated and could neither read or write.

He settled in Fife and had 15 children. All his sons worked in the coalfields of Fife and two of them tragically lost their lives at an early age as a result of accidents in the pit.

My father (Patrick Woods) was born in County Leitrim in Ireland, was orphaned as a child and eventually settled in Methil, Fife where he raised a family of five children with my mother (one of the aforementioned 15).

All these people were hard working individuals who contributed to Scottish society. As examples, my sister has a MBE for services to education and my late brother (Michael Woods) was a SNP Councillor in Fife for many years.

My wife and I raised our children to respect others.

All 3 of my children have worked within public services and have contributed to civic society in Scotland throughout their working lives.

Along with many members of my family, I have experienced anti Catholic/anti Irish abuse and discrimination throughout my life, including in the workplace.

The point I’m trying to make is that my family have assimilated into Scottish Society and have contributed significantly to it.

Why therefore do I still feel that my family and me are still effectively made to feel like second class citizens in our own country?

I am now 77 years of age and sadly Scotland has not progressed in any way in dealing with Anti Irish/ Catholic abuse throughout these years.

Following the events in Glasgow and across Scotland over the previous months and years, culminating yesterday in disgusting racist and religious discrimination I can be silent on this matter no longer.

I believe we are beyond the point where individuals are singled out for prosecution. I am fed up hearing about a minority. This is not a minority involvement and there needs to be a different approach.

I would like to know what the Scottish Government, Judiciary and Police intend to do to tackle this issue. Sadly I fear it will be more platitudes that take us nowhere.

In closing I would point out that Scots of Irish Catholic descent are here to stay. They have and continue to add more to Scottish society than small minded bigots who live in the past and continue to show Scotland as a nation where such racism continues to be swept under the carpet.

Glasgow subject to massive street CCTV, if these men were stopped by @policescotland later on the ? to be asked is, how many were arrested or at the very least reported to procurator fiscal- Need advice on how? Lord Justice General appeal court decision👇🏽 https://t.co/9IgrF3jj9N pic.twitter.com/zAVdNaLwuh

This is the kind of racism you don’t notice – day after day, week after week, year after year, decade after decade. When are you going to call it out? You could start by recognising our community. @scotgov @GlasgowCC https://t.co/U9NSYjH2u2

“We were made aware of sectarian singing by a group of people in the Jamaica Street area of Glasgow on Sunday. Enquiries into the incident are ongoing.”

Language is important @policescotland. If this was against any other nationality you’d be calling it “racist”. Do better.

Unacceptable, reprehensible and cannot be tolerated here in Scotland or anywhere else. https://t.co/eQi02sSvfR

1/3: Our charity stands in solidarity with Scotland’s Irish and Catholic communities targeted by hate yesterday.

Chants of “why don’t you go home” are racist.

Anti-Irish and anti-Catholic hatred in all its forms must be challenged and treated with the seriousness it deserves.

Scenes all over Scotland, particularly in Glasgow, are unsurprising. Especially when the same people were allowed run riot in May. It’s Scotland’s shame these sentiments are allowed on our streets and neither the polis nor the government do a thing about it. @NicolaSturgeon

How can @STVNews call a racist chant ‘sectarian’ ? Media outlets and politicians should be banned from using the S word because it is a get out of jail free card in the campaign to avoid talking about anti-Irish racism https://t.co/1gfrvA4Ua6

Will @RangersFC call out their fans for racist singing yesterday?

Will @PoliceScotland call out their officers for facilitating racist fans marching through Glasgow.

If only these brave upholders of the law were present at the time https://t.co/vWisuTTjf6 pic.twitter.com/qYltYvXfsy

Sadly, the issue is @policescotland “doing their duty” enabled racist behaviour. Holding our hands up in horror is all well & good, but if @scotgov can’t manage a devolved issue like police properly, why would we believe they could do it in an independent Scotland. #wordsAreCheap https://t.co/tLtZPJWzXI

When Will This Behaviour Stop Being Accepted? The Ugly Face Of Anti-Irish Racism On Show As A Section Of Scottish Society Continues To Hark Back To The 17th Century…https://t.co/WSJEMVD5Ji

The images of a mob singing anti-Irish racist songs, as they marched through Glasgow escorted by police, ought to be shocking but are shamefully all too familiar.
At the very least, we need an assurance that every identifiable person in that crowd will face charges.

Why is @policescotland facilitating (again) a racist anti-Irish march, no kettling or arrests? If they replaced Irish with Pakistani/Muslim police would act, so why not now? Irish famine killed 1 million (Protestants too!) ended in 1852 it’s now 2021🙈 pic.twitter.com/3UJQqravsS

I agree with everything Mark says here but I also wonder why this form of #hatespeech is acceptable? I’m sure 1000s of other Scots of Irish descent are wondering the same https://t.co/uUKEYxIOFq

Last week there was outrage at racism towards a Japanese footballer and arrests made. This week it’s anti-Irish racism and @policescotland are facilitating it @Call_It_Out_ https://t.co/xwi4CVlDI6

This is the centre of Glasgow. This is a crowd being escorted – not arrested – by the police while they scream at the city’s Irish to go home. This is 2021. Don’t try and tell me that Scotland doesn’t have a racism problem. https://t.co/5cifzPAm0V

Glasgow, again became a City of Shame today: “The famine is over, why don’t you go home.” @scotgov @ScotGovFM @HumzaYousaf @policescotland @Call_It_Out_ Are large scale public expressions of anti-Irish racism acceptable in this country?🏴󠁧󠁢󠁳󠁣󠁴󠁿

Time for Glasgow MSPs to stop tweeting and get legislation to outlaw anti-Irish hatred in the same way as they’d deal with other forms of racism.https://t.co/BtGAe3X7XO

Civic Scotland needs coordinated plan of action to combat the unacceptable behaviour we’ve seen again today. Football authorities need to address the elephant in the room. 20 guys on a bus behaviour shouldn’t be treated differently to 100 guys on the street or 50k in a stadium.