New Year’s Day 1921 was a fine day. New Year celebrations, as usual, had been long and intense, but soon after midday there was a general movement to the west end of Glasgow to Ibrox to see the game that everyone had been talking about for weeks, the Old Firm derby between Rangers and Celtic. Rangers were undefeated in the League, but Celtic were not all that far behind them, and were the winners of the then prestigious Glasgow Cup in which they had beaten Rangers in the semi-final and Clyde in the final.

This Old Firm game was of course more than a football match, for it must be seen in the background of what was going on in Ireland at this time. The picture was confused, and the British newspapers grossly misrepresented what was actually going on, portraying the Irish patriots as criminals and thugs and ignoring or playing down the activities of the real criminals, the Auxiliaries, commonly known as the Black and Tans recruited to a large extent from the prisons of Dartmoor and Peterhead.

But the rest of the world was not so impressed, and people wondered, for example, why the Lord Mayor of Cork, the educated and urbane Terence McSweeney had died on hunger strike in Brixton Prison, London, and why the Royal Irish Constabulary and Auxiliaries had opened fire on the crowd at a Gaelic football match at Croke Park.

The political situation was no clearer. Ireland had voted overwhelmingly in favour of De Valera’s Sinn Fein in the December 1918 General Election, and when independence was not immediately granted, Sinn Fein had unilaterally seceded to form a Dail in Dublin. The problem was the minority in the North who feared independence, and there was now a disturbing trend in Glasgow that Rangers were beginning to identify with that minority.

Both full backs, Bert Manderson and Billy McCandless were Ulstermen, and now that Harland and Wolff’s shipbuilding concern were active on the Clyde, loads of Ulstermen had moved to Glasgow and had begun to support Rangers, with their offensive songs and ridiculous beliefs that the Battle of the Somme could have been won if it had been left to the Ulstermen, for example.

All this was certainly in the air that New Year’s Day. 1920 had seen a change at the top of Rangers as well. William Wilton had sadly perished in a boating accident on the Clyde near Gourock in early May (you can read about that tragedy on The Celtic Star HERE) and had been replaced by William Struth, called not without cause “ruthless Struth”, and he was not slow to realise the changing nature of the Rangers support and to tap into its potential.

Willie Maley of Celtic claimed to have been a close friend of William Wilton. He never made the same claim about his relationship with Struth. 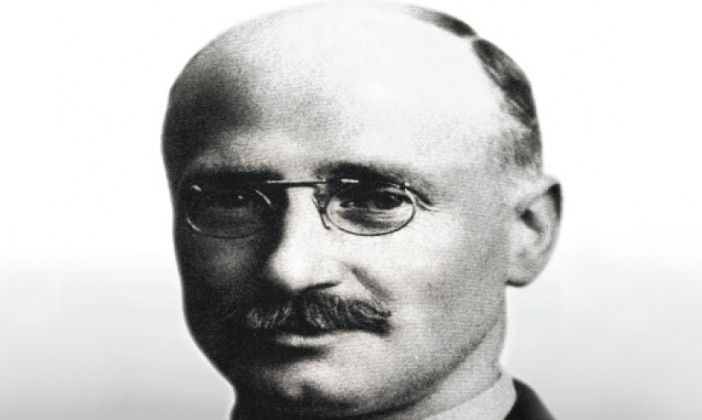 The teams seemed equally balanced. Both had sound defences, and good attacking footballers in their forward line, but Rangers were more reliable, if a little less flamboyant than the champagne football of which Patsy Gallacher and Tommy McInally were capable. It was a game which promised a great deal.

The crowd was excited and animated, but one of the differences between this crowd and those before the War was that the Rangers fans tended to congregate at one end (the end nearest the subway) and the Celtic fans at the other. Supporters also dressed more in the colours of their side, wearing rosettes and waving wooden “crawmills” to make a noisy sound. And there were some who appeared wearing captured German helmets with slogans like “good old Rangers” or “Celts for ever” written upon them.

There was also the sad sight of the disabled. They were normally admitted free, and were give a special enclosure in front of the main stand where volunteers supplied them with tea and biscuits. The blind were a special case. They sat in one section of the enclosure and had the game described to them by volunteer “commentators”.

When the game started, it was clear that Rangers were probably having the better of the play, although their star left winger Alan Morton who had joined the club from Queen’s Park in 1920, was not making much of the determined and steady Alec McNair, and the same could be said of centre forward George Henderson who was up against Willie Cringan. 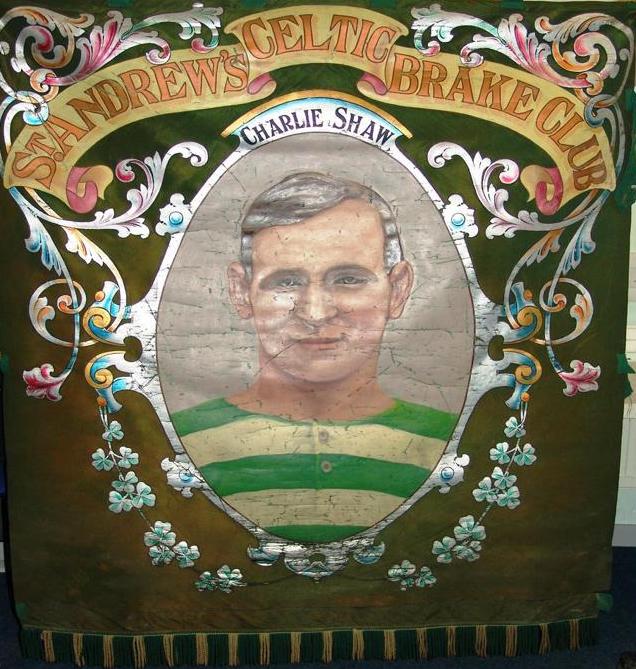 Tommy Cairns was a tricky little player however, and he was backed up by the sheer solidity of Tommy Muirhead and Davie Meiklejohn behind him. But even when they did get forward, they found Celtic’s ever reliable Charlie Shaw in the goal, and Alec McNair to stop them as well as Willie McStay, a war veteran and a very impressive left back.

Celtic for their part seemed to be trying to involve Patsy Gallacher as much as possible, and this was understandable for Patsy on song was the best in the world. It was often rumoured that he and the “boy wonder” Tommy McInally did not get on, for they were two of a kind, both in their style of play and general personality, but there was none of this on show today, and the Celtic forward line played as a cohesive unit. 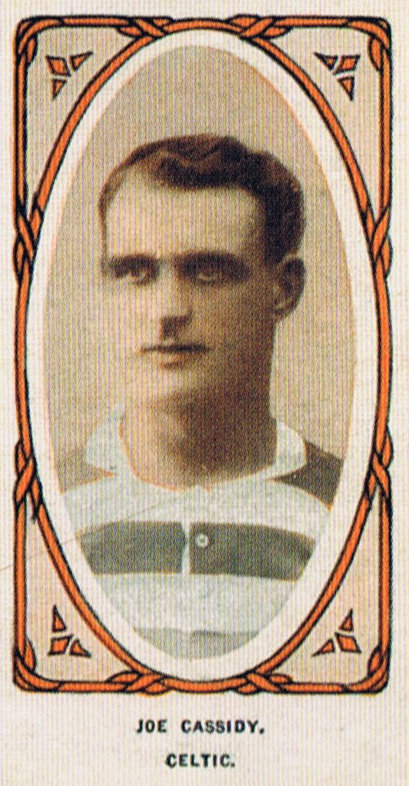 The first half was heading towards its close – time had passed so quickly – when Celtic took the lead. It was a long through ball to Joe Cassidy who ran on and scored, giving goalkeeper Robb no chance. It was all the more effective because it was unexpected, but it was also a great tribute to the ever alert Joe Cassidy. Cassidy was the proud possessor of the Military Medal since his days in the Black Watch and the Highland Light Infantry in the war. He had been a key element of Celtic since leaving the Army, but this was to be the first time that he was ever to come close to heroic status.

Half time was spent in glorious appreciation of that goal, and eager anticipation of the second half with the real belief growing that today could mark the end of Rangers unbeaten League run. Certainly, the noise from the Celtic supporters was far greater in volume than the noise from the other end.

As the second half commenced, the play intensified. Charlie Shaw once again pulled off several fine saves as Rangers pressed to preserve their undefeated record, and then Celtic would run up the field and try to add to the lead. It was great entertainment, and the crowd, which had now swelled to such an extent that there was very little room for anyone else, thoroughly enjoyed it.

But Celtic were now the better side, and about half way through the second half came the moment which confirmed Celtic’s victory and destroyed Rangers undefeated record. 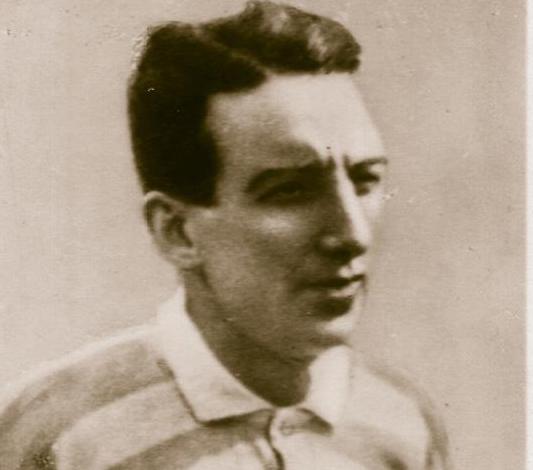 Patsy Gallacher made ground on the right of the park defeating a couple of opponents, then he passed an inch perfect ball to Tommy McInally with Cassidy lurking behind him. In a brilliant piece of work, McInally shaped to shoot, but then suddenly jumped over the ball and shouted “Joe!” so loudly that it was heard in the Press Box in the stand over the noise of the crowd. It was a brilliant dummy, and all Joe Cassidy had to do was dribble the ball round McCandless and then goalkeeper Robb to score what was a genuinely brilliant goal. 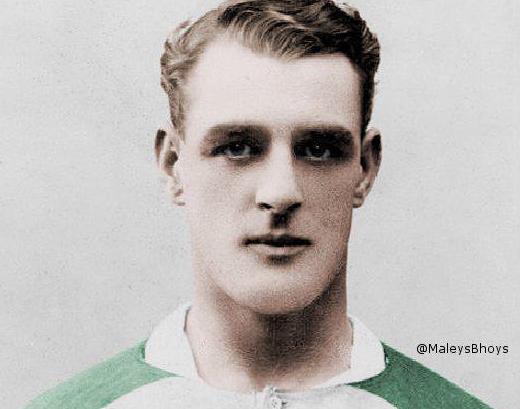 The Celtic End lit up in appreciation of all this, and the volume never diminished until the game ended with “Erin’s Green Valleys” being belted out, to the unashamed joy of the writer of The Glasgow Observer, who, one imagines, broke the so called neutrality of the Press Box by joining in! 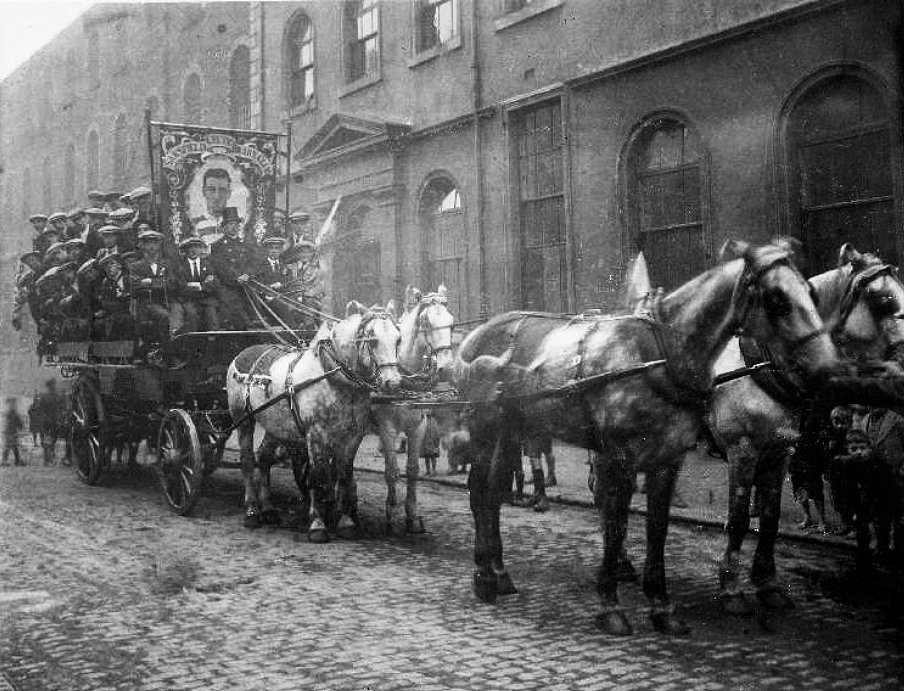 It was a tremendous victory for Celtic, and much feted throughout the Irish Diaspora, not only in Scotland and Glasgow itself. The Paisley Road after the game was full of horse-drawn and motorised Supporters Brake Clubs travelling in both directions with supporters waving flags and blowing bugles and singing their songs of victory.

Each brake had some sort of inscription on it, recently produced by chalk. The obvious one was Celtic 2 Rangers 0 but there were variations along the lines of Cassidy 2 Meiklejohn 0, Maley 2 Struth 0, Rebels 2 Black and Tans 0 as well as the more oblique and opaque ones of “Good Old Joe”, “Sinn Fein Abu” and “Glasgow is Irish”. 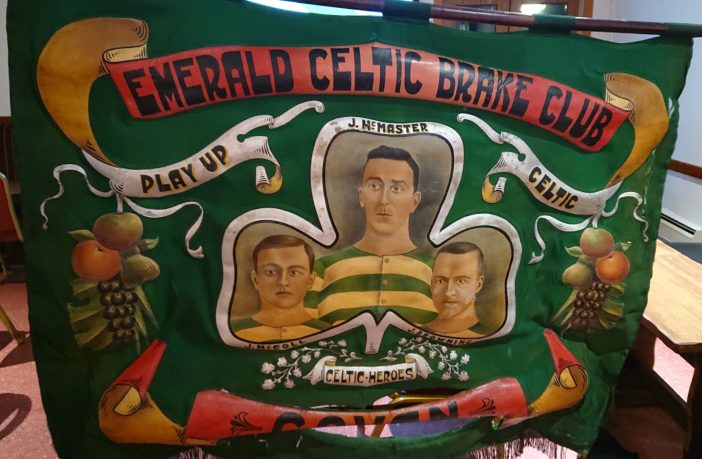 New Year’s Day 1921 would remain in the hearts of Celtic supporters for a long time. It would have to. Not until 1983 (62 years later) would Celtic again defeat Rangers at Ibrox when the fixture was played on New Year’s Day.