You are at:Home»Latest»Rangers 1 Celtic 2 – Wind, Rain and all theRangers Champions League Pain

Rangers* 1 Celtic 2…Oh my days! Wind and rain and all theRangers pain!…

And it's over and it's a Glasgow Derby cleansweep for the season!!🍀 pic.twitter.com/zxbJJBtURH

On a day where Glasgow rivals shared the impact of the wind and rain, it was only one side that felt the pain as Celtic won a third consecutive Glasgow Derby, whitewashed their Glasgow Derby opponents with a 2-1 win at theRangers Training Centre and ultimately set their sights on the possibility of an SWPL1 league challenge to perennial winners Glasgow City.

Celtic headed into today’s SWPL1 Glasgow Derby with rivals’ theRangers with a psychological if not arithmetic edge over their rivals in the race for European football next season, having won both games home and away without theRangers even managing to score against a Celtic side assembled at far less cost and with far less experience than their expensively assembled opponents.

Prior to this game Fran Alonso understandably tried to play down the importance of the meeting between the sides, however with Celtic trailing by a single point in the chase for Champions League qualification and five points behind leaders Glasgow City, today’s match was of vital importance to both sides, and Alonso’s stating eleven certainly showed Celtic meant business as the Hoops went for experience as the big hitters were asked to deliver on the big occasion. 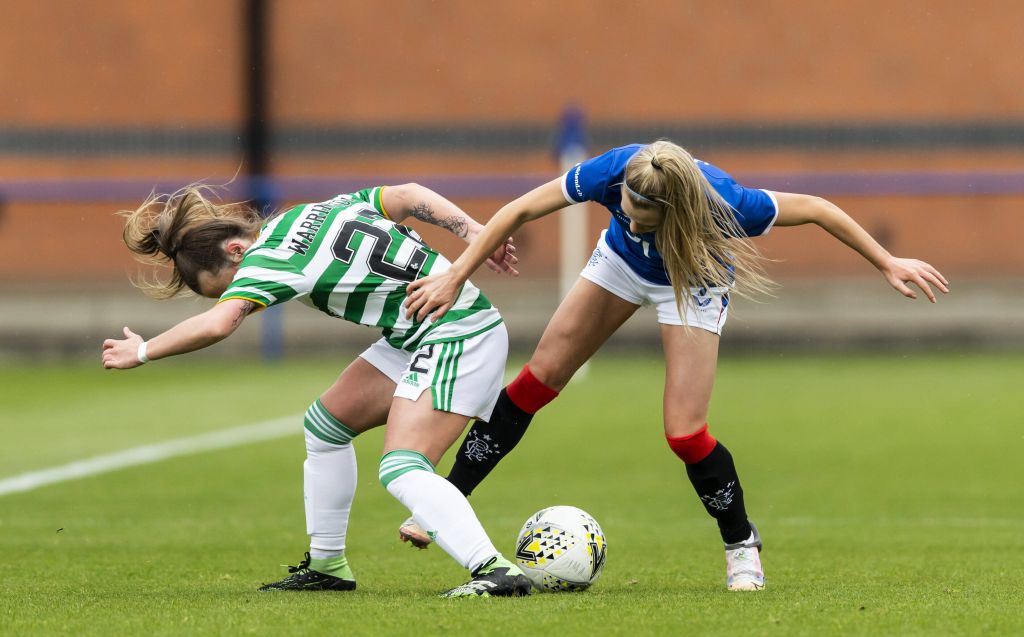 Alonso stated pre match that fight from his side was ‘unconditional’ and those chosen to go into battle this afternoon certainly didn’t lack for that.

Chloe Logan returned between the sticks after Rachael Johnstone had played the last two games. Whilst at the back the only real surprise omission from the line-up, other than Celtic’s playmaker Sarah Teegarden missing a Glasgow Derby to tie the knot back home in the States, was a Chloe Craig omission from the starting eleven as Jodie Bartle, Kelly Clark, Caitlin Hayes and Chloe Warrington made for a strong backline.

In midfield it was no surprise to see the selection of both Lisa Robertson and the impressive Anna Filbey, whilst Jacynta’s recent form earned her a place in the team alongside previous ‘skelper of theRangers Mariah Lee also made the cut and in form goalscorers Rachel Donaldson and Sarah Ewens completed the line-up.

The first half exchanges saw theRangers dominating possession and Celtic happy to allow it as they looked to draw their opponent in and look to hit on the counter. However, for Celtic’s gameplan to work they needed to be careful and clinical in possession something they didn’t quite manage in the first half as the absence of Sarah Teegarden was keenly felt.

The first real chances fell to theRangers as Cailin Hayes was robbed of possession. As the ball was cut back Lizzie Arnott should have done better with a simple finish only to find the covering Chloe Warrington positioned perfectly to clear the goalward bound effort, before Brogan Hay was wasteful when left clear at the back post and seemed caught in two minds as to whether to go for goal or find a teammate. In the end the hesitancy played into Celtic’s hands.

This was enough to spring Celtic into action and Mariah Lee had looked to have opened the scoring after 19 minutes with a superb diving header from a Lia Robertson delivery that Jenna Fife in theRangers goal pulledoff a scarcely believable save as the ball already looked behind the ‘keeper, yet from the resultant corner all the good work of theRangers keeper was undone as she and Ness performed musical statues and Kelly Clark pounced with a superbly timed run and header to put Celtic a goal up.

Six minutes later however it was Celtic’s turn to question their goalkeeper as Chloe Logan failed to deal with a looping 22-yard effort from theRangers Rachel McLaughlin as a wind assisted shot from distance came of the underside of the bar with Logan having lost the flight of the ball, and the game was all square again.

It must be said however theRangers turned the screw soon after and Chloe Logan more than made up for the error as first she made a reaction save from a deflected effort, before pulling of a world class stop as a Brogan Hay shot looked bound for the top corner until Logan got to the ball to deflect the ball for a corner. She may have been culpable for theRangers equaliser but now Logan found herself entirely responsible for Celtic going in level at the break.

The second half it must be said was a repeat of the first minus the clear-cut chances, as the game reverted to a war of attrition as once again Celtic struggled to hold onto the ball and the home side appeared incapable of doing little with their superior possession.

Indeed the only chances fell to Celtic and it took until eight minutes from time as a Caitlin Hayes header looked to be the chance lost as ‘keeper Fife in theRangers goal produced an incredible fingertip save, and with it looked to save a point for theRangers. Yet much like the first half the initial save was mirrored by a static approach to defending as a Lisa Robertson corner was met, this time at the front post, by a bulleted Sarah Ewens header to win not only three points but a march on Champion’s League qualification for a Celtic side who have produced a Green and whitewash of a theRangers side much more experienced, far more expensively assembled, but missing something altogether more important – togetherness and desire.

Celtic now head into the final stages of the season with Champions League football the goal. And now it is entirely in our hands as theRangers have once again found a hungrier and more determined rival more than a match for money thrown at a footballing project. Wherever have we seen that before?

Do Celtic now dare to look upwards and aim for a Glasgow City side just as expensively assembled and possibly just as complacent as theRangers? I guess we do. The Champions League is in our hands, the league title now may also be within grasp.

Check this out…we are now within 3 points of Glasgow City! Beautiful Sunday…