You are at:Home»Latest»Rare Celtic Top Stolen From National Football Museum

A Celtic top once worn by Charlie Nicholas in the 1991/1992 season has been stolen from the National Football Museum in Manchester.

Paul Lamb, who collects Celtic shirts from throughout the years had loaned the shirt to the museum as part of their Hall of Shame exhibition. The shirt, which is almost 30 years old, features the controversial Ford Peoples logo as well as the rocky green design.

Greater Manchester Police got involved when the shirt was stolen at 14:30 GMT on 1 February. Now the Police body have released CCTV still of the person that they want to locate in relation to the theft. 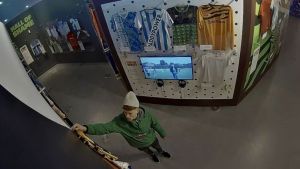 Lamb spoke about the theft, reported by the BBC, saying that he was ‘devastated’ after one of his collection.

“Most of the football memorabilia collecting world are very helpful and I’m sure they would do everything to see it returned, as if it was one of their own.”

Retro football shirts are becoming more and more fashionable with an appetite for the weird and wonderful kits of the 80s and 90s sought after massively and this shirt would be valued at around £600 due to the fact it is in pristine condition as well as having been match worn.

Hopefully Paul will be reunited with his top and GMP find the culprit and bring him to the law.