You are at:Home»Latest»Real Madrid leading race for Jeremie Frimpong as Celtic set to benefit

Real Madrid are favourites to sign Jeremie Frimpong, which means that Celtic will likely net a hefty sell-on fee. The Bayer Leverkusen full-back is set to return to the Bundesliga club following the World Cup in Qatar. Frimpong and his Dutch teammates will face up against Lionel Messi’s Argentina in the Quarter Finals.

According to a report from Spanish outlet Defensa Central, Carlo Ancelotti’s Spanish Champions are keen on gazumping Man Utd to the signature of the Flying Dutchman. The report says that Madrid are willing to pay £21m for the player’s signature, which means that Celtic will land a sizeable chunk given the sell-on fee. 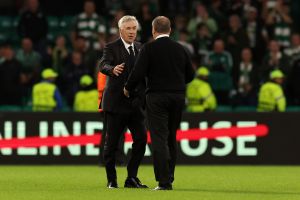 The 21-year-old joined Leverkusen in January 2021 after an impressive spell with Celtic; he was only there for 18 months. Frimpong, who turns 22 in December, will have talks with Leverkusen after the World Cup.

The move has paid dividends for both Celtic and the player as he has been able to push on after struggling to see a path under Neil Lennon in the 2020/21 season. Now, he is attracting interest with powerful running down the right-hand side. Man Utd and Real Madrid will compete for the signature of the player.

Celtic, who paid £350,000 for the player’s services from Manchester City, received an offer they couldn’t refuse for Frimpong and it was off to the Bundesliga and Bayer Leverkusen for Jeremie for a fee on £13m. Even with a sell on clause due to City, Celtic will likely net a tidy sum on Frimpong’s next move.