You are at:Home»Latest»Revealed – Rodgers failed in attempt to sign ex-Liverpool defender for Celtic

Paul McGowan has revealed that Brendan Rodgers attempted to sign Steven Caulker for Celtic, only to be rejected by the English defender. Speaking to Open Goal’s ‘Keeping the Ball on the Ground’ podcast, the Dundee midfielder revealed that Caulker and Rodgers had fallen out when the ex-Liverpool defender rebuffed the Celtic manager’s offer.

Si Ferry asked McGowan if he reckoned that the ex-Tottenham defender could have made it with either half of Glasgow’s Big Two.

“Could he have played for a Celtic or Rangers?”

McGowan was sure that Caulker had what it took to have played for Celtic and even told how the then 25-year-old rejected to link up with his manager at Swansea and Liverpool. Rodgers moved for Caulker after the Invincible Treble season in 2017 but the defender rejected a deal to sign for Celtic.

“Easy. He said, open book, that Rodgers fell out with him. Dunno how true it is, it’s coming from Steven but Rodgers was raging with him.

Rodgers apparently offered Caulker a three-year deal but due to the high wages that Caulker was on at QPR, he rebuffed the advances of the Irishman.

“He told Brendan he wasn’t signing and Brendan was fuming at him.” 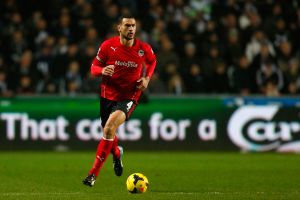 Rodgers helped Caulker get back into football when he signed for Dundee back in 2018 and the pair enjoyed a close relationship despite overcoming the disagreement as a result of Caulker rejecting Celtic.

Previous ArticleReflections Of A Ross County Rant: Neil Lennon Ten Years On
Next Article Highland Paddy – They won the Big Cup and they brought it back