You are at:Home»Latest»Revealed – Why Ntcham Trains Alone

Olivier Ntcham has revealed that he is doing extra training alone in order to regain a starting spot at Celtic.

The Frenchman, who signed from Manchester City in 2017, has made 19 appearances for the club this season with 10 of those coming from the bench; however, he is determined to get his name in the starting XI.

Speaking to The Celtic View, the midfielder admitted that he was doing extra training alone in order to impress Neil Lennon enough to merit displacing Callum McGregor or Scott Brown in the centre of the park.

“The manager and coaching staff trust me to train myself. I don’t always need to ask them. I will check with them sometimes because I am not going to do extra work one day before a game and not be fresh for the match.

“I think the manager has been pleased to see me put in the work. It benefits not only me but the rest of the team because hopefully it makes me a better player.”

“I work with my coach who comes over from Paris. He works out my sessions and we work on them together after training.”

Just noticed the start Senad Lulic had over Ntcham for the winning goal in Rome!

Granted the the Celtic man was still fresh after coming on late but Lulic had absolutely nothing left in the tank here!

Ntcham, who scored that goal at the Stadio Olimpico against Lazio insists that he uses the training as an opportunity to train on specific aspects of his game as he looks to constantly improve and evolve as a player.

“I look to improve on every part of my game, even the most basic aspects like one-twos because you need to be perfect with those things in the important moments.

“When you’re training alone it’s best to work with the ball and repeat all the simple stuff so that is becomes simple in the games.”

“I’m quite happy with the results I’m seeing from the effort I’m putting in. When you work hard, even if it doesn’t pay off now, it will in the future.” 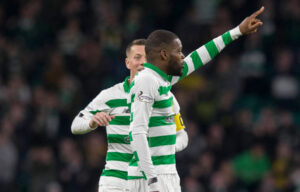 It is impressive to see that Ntcham is training more in order to improve and regain his place in the team. A usually surly-looking player, his commitment can’t be questioned if he is willing to use his own time and money to continue to train. It would be easy for him to leave Lennoxtown and relax but it is testament to the desire he has to improve his game, which is surely a benefit for Celtic.

Previous ArticleVideos – The Sweetest Thing plus footage of the beam-back at Ibrox Emptying Fast
Next Article Magnificent Forrest, Cool as Cucumber Ntcham – Jonny Hayes on Celtic’s Glory Night in Rome