You are at:Home»Latest»Risk and Reward, Joe Hart on Angeball: “Yes, it is a risky way of playing football”

Joe Hart has echoed skipper Callum McGregor’s thoughts as we look ahead to Pittodrie on Sunday. Hart, who conceded four goals against a very astute Leverkusen side on Thursday night, has insisted that the team cannot dwell on the heavy defeat at Paradise.

Speaking to Celtic TV the Celtic goalkeeper was asked about coming up against former Celtic captain for the first time in the unfamiliar red shirt of Aberdeen. “Scott’s affiliation with the club is a huge part of the history. But I think the most important thing is that he won’t be wearing a Celtic shirt on Sunday. He’ll want to win for his team and we want to win for our team,” the Englishman said. 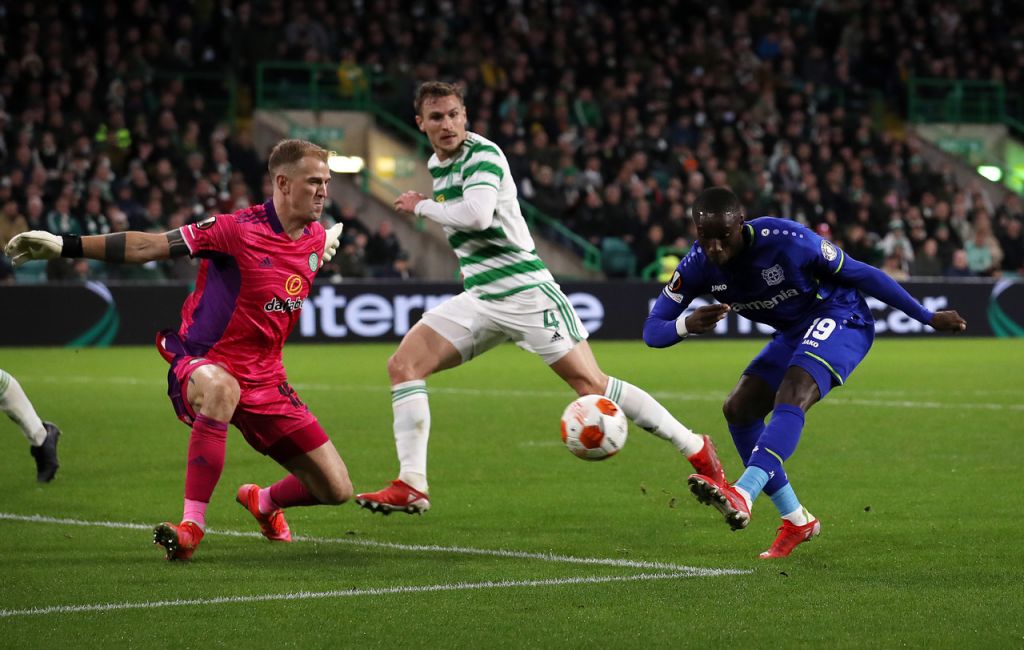 Moussa Diaby shoots whilst under pressure from Joe Hart during the Europa League match between Celtic and Leverkusen at Celtic Park on 30 September, 2021.. (Photo by Ian MacNicol/Getty Images)

“It’s important that we pick ourselves up, we go again, we go hard and we look to get three points. Aberdeen have got their own problems and they’ll take care of themselves, but we have to look at us. We’ve got turn our possession and dominance in games into victories – it’s as simple as that.

“We’re going to go there with the same intentions we’ve had in every game – to dominate and win, and we need to get over the line. “I’m really enjoying the challenge. I’m immensely proud to be up here and be part of this club. And however I’m playing, I want to be on the winning team.”

With this Sunday at Aberdeen being the last chance to put points on the board before the international break, Hart wants his teammates to make sure they show their resilience and togetherness. He added: “With it being the international break after Sunday, this is our chance to show that we have got strong characters, we are strong players, that we are going to win games for this football club.” 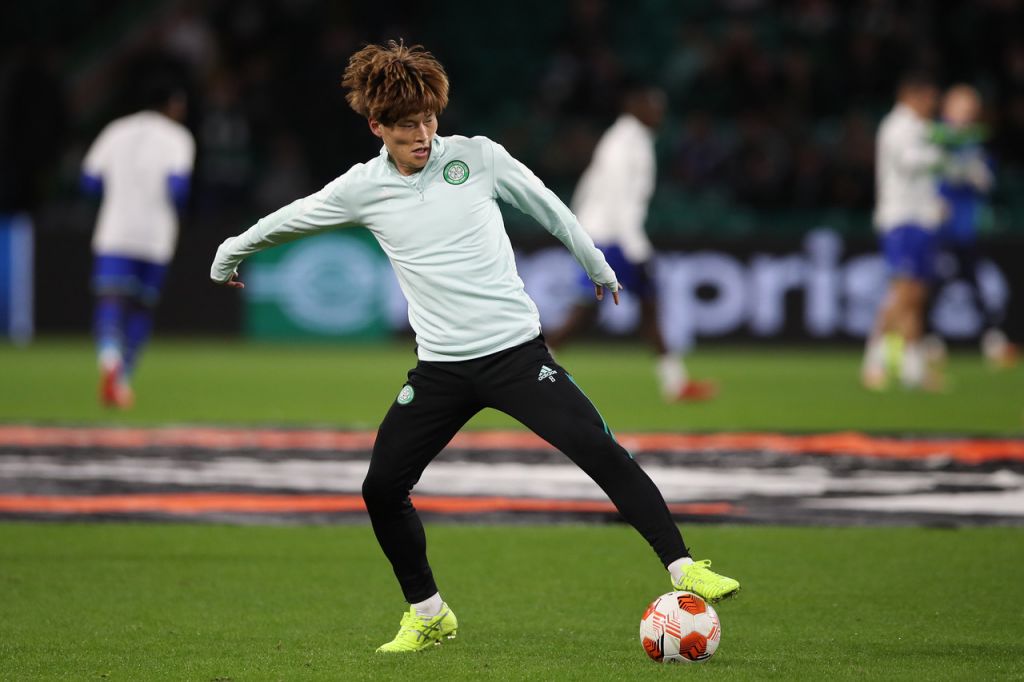 Kyogo Furuhashi of Celtic warms up prior to the Europa League match between Celtic and Leverkusen on 30 September, 2021. (Photo by Ian MacNicol/Getty Images)

“We’re definitely frustrated – especially in the league where we’ve been dominant with the stats, if you like, but ultimately it’s about winning games and we need turn it into that. “We’ve had some good phases in Europe – we played well in patches in Betis, played well in patches on Thursday night – and we’re coming up against some good goalkeepers at the moment!

“It’s going to take a big performance on Sunday. Aberdeen are having their own tough time in the league, but we know that with the visit of a top team like ourselves, there’s one of two ways the game can go and it’s up to us to make it go our way.”

Celtic are in real need of a morale boosting victory in the league, and Pittodrie could just be the place to get it. Hart is correct though, if Celtic want to beat a very desperate and determined Dons side, they need to play with a togetherness and gritty attitude. Sunday could be pivotal to putting Angeball back on track.

🎙️ Hear from Joe Hart ahead of #ABECEL. #cinchPrem | #COYBIG 🍀

“It is why we play football. I love it. I love the fact that I am 34 years old and I am learning a new style of play, new parts that I can personally do. I am loving the new challenge of this style of play that I have maybe not been given the chance to play before.

“I will be honest, I didn’t know if I could play it. But I feel comfortable in it and feel I am representing myself well. But it is not about me. It is about the team, it is about getting results.

“Yeah, we’re a new group of players. But so what – that is not an excuse. We’re here every day, trying to put things right and trying to perform. And we do believe we are close.

“That is only going to frustrate people on the outside. It is and we know that. But there is no point coming this far to not see through what we are trying to do.

“We take it all together. We are a group, we are a team. The manager is included in that team. 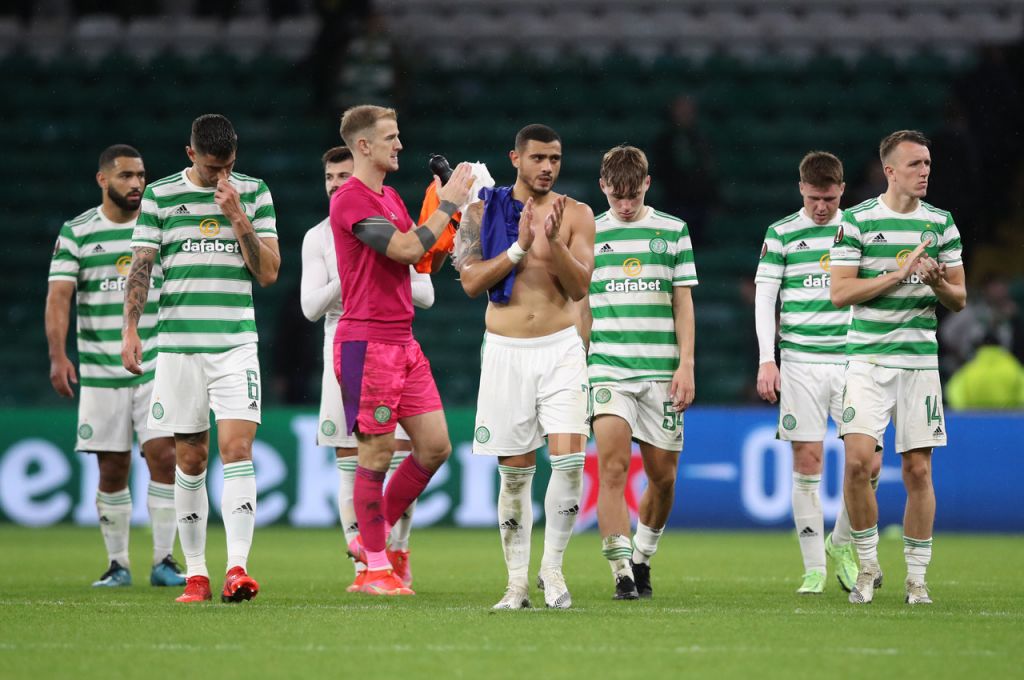 “Yes, it’s a different way of playing to maybe how other teams are doing things but we have got a top coach with a good coaching team behind him who also believe in what they are doing. All the information is there for us, every single bit of information for us to play this way is there. 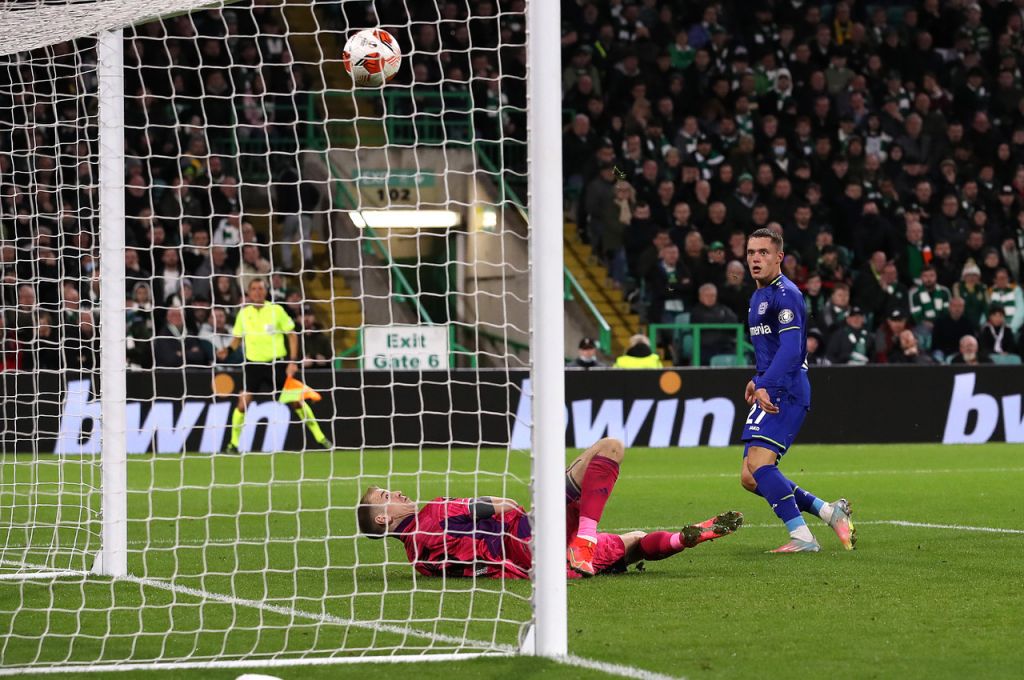 Florian Wirtz scores the second goal past Joe Hart during the Europa League group G match between Celtic and  Leverkusen at Celtic Park on 30 September, 2021. (Photo by Ian MacNicol/Getty Images)

“I am really enjoying the challenge personally. I am immensely proud to be up here and be part of this club. But however I am playing, I want to be on the winning team. This is our only chance to show that we have got strong characters — that we are strong players and that we are going to win games for this football club.

“Sunday is an important game for us. We know Aberdeen are having a tough time in the league but we know that when a team like ourselves visit there is one of two ways the game can go. It is up to us to make it go our way. It is important we pick ourselves up, go again and go hard and pick up three points.

“They have got their own problems but we have got to look at us. We’ve got to turn our possession and our dominance in games into victories. Simple as that. We’re going to go there with the same intention as we have had in every game — to dominate and win. We need to get it over the line.

“We are definitely frustrated, especially in the league. The stats show we have been dominant but ultimately it is about winning games. We need to turn it into that. 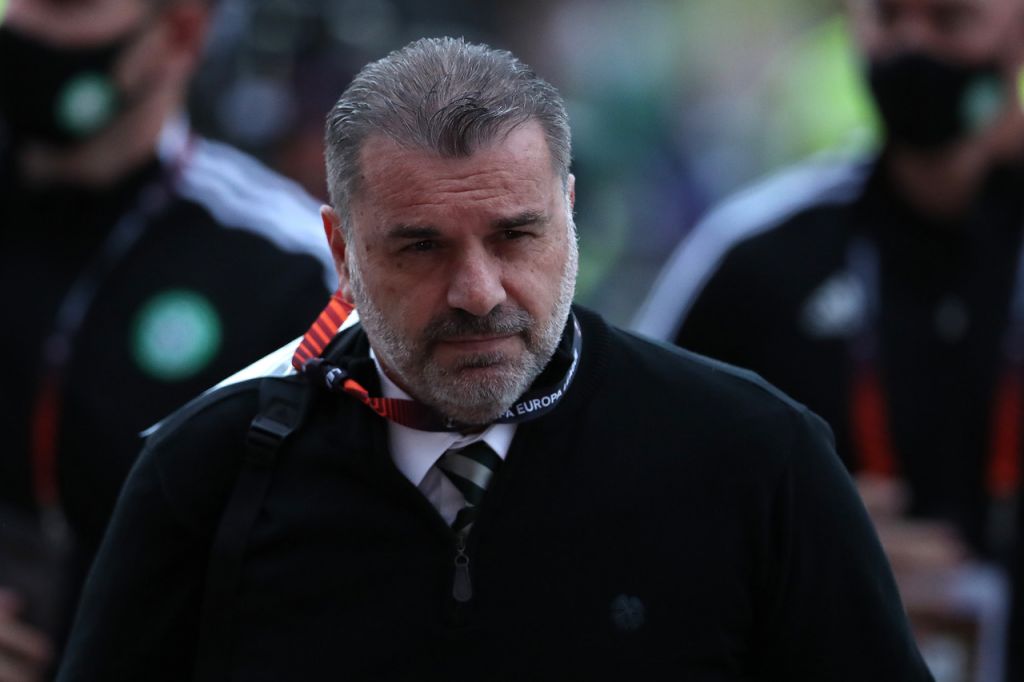 Ange Postecoglou arrives at the stadium prior to the Europa League group G match between Celtic and Leverkusen  on 30 September, 2021.. (Photo by Ian MacNicol/Getty Images)

🎙️ Hear from Ange Postecoglou ahead of #ABECEL. #cinchPrem | #COYBIG 🍀

Previous ArticleAll for VAR technology but pointless in the hands of Scottish football governance
Next Article Postecoglou inherited the scorched earth he himself left, Lennon’s lack of decorum