Kevin Clancy has been confirmed as the referee for Sunday afternoon’s game between Celtic and Ross County in Dingwall. In the first game before the split, Celtic face Malky Mackay’s highflying Staggies, who defied odds and finished in the top six. 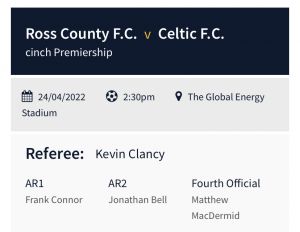 Clancy will be assisted by Frank Connor and Jonathan Bell with Matthew MacDermid acting as Fourth Official.

This is Clancy’s fifth appointment of the season. However, Celtic have recorded just one win in the four appearances in which Clancy has officiated. The defeat to Rangers in August, a draw with Dundee United in September, a win over Aberdeen in November and a draw against Hibs in March. Not withstanding Celtic have struggled in some of these games – most notably the draws, Ange Postecoglou will be hoping his side are dominant and there will be no need to appraise Clancy’s performance.

Postecoglou is just games away from sealing the Premiership title’s return to Paradise and he will be keen to get the matter sealed without hysteria, picking up maximum points.

Celtic’s last trip to Dingwall resulted in a dramatic late win with Tony Ralston’s late header bringing all three points back to Paradise. The other two games (at Celtic Park) have resulted in 3-0 and 4-0 wins respectively.