Rumoured Celtic target Taylor Harwood-Bellis is in action for England’s U-21 international’s tonight versus Armenia. The big centre-back will also captain the side that boasts a litany of talent all over the side. Anthony Gordon of Everton, Arsenal’s Emile Smith-Rowe and Curtis Jones of Liverpool are just some of the names in the team tonight.

Harwood-Bellis has emerged as a possibility for Celtic this summer with the need for another central defender high on the agenda after the injury to Sweden centre-half Carl Starfelt against Slovenia in the UEFA Nations League last week, and the almost certain departure of Christopher Jullien. Added to this is the fact Cameron Carter-Vickers is still not officially a Celtic player and we have room for more reinforcements currently. 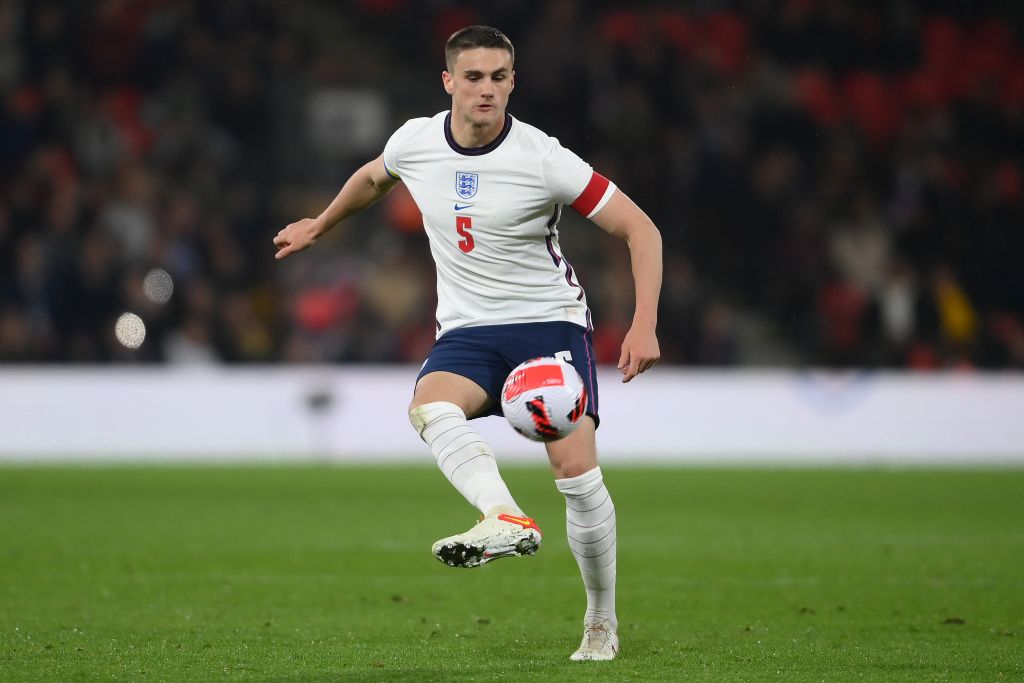 Taylor Harwood-Bellis of England in action during the UEFA European Under-21 Championship Qualifier match between England U21 and Andorra U21 on March 25, 2022. (Photo by Mike Hewitt/Getty Images)

The young Manchester City player has been linked due to Celtic having close connections with the City Group, as Ange used to work for Yokohama F. Marinos who were part of their network in Asia. The England U-21 captain’s current City teammate and Japanese international, Ko Itakura has also been linked with the club. Anthony Joseph of Sky Sports confirmed that Celtic had been watching the two stoppers on Twitter recently, giving weight to the rumours of impending approaches.

Despite talks ongoing with Spurs and Carter-Vickers, it’s understood the Hoops are on the lookout for an additional centre-back, with Chris Jullien’s future uncertain. #CelticFC #MCFC

With Taylor being the correct fit and style of what Celtic are looking for in the transfer market this summer, it is no surprise that Ange Postecoglou and Michael Nicholson may very well be asking the question of the young Englishman in the weeks ahead.

Having never really had a proper footballing home, Harwood-Bellis has been out on-loan of late, the most recent being with Stoke City in the English Championship, making 22 appearances. With him earning rave reviews for his performances with the Potters, it’s no wonder the interest in him is sky high this summer.

New possible Burnley head coach – and Man City legend – Vincent Kompany is keen to take the player to Turf Moor from his old club. Celtic need to move quick and be persuasive if they are to tempt the 20-year-old north of the border to Parkhead.

Our #YoungLions take on Albania tonight looking to move one step closer to #U21EURO qualification.

You want one of these? It’s completely FREE when you purchase INVINCIBLE or TWICE AS GOOD* from Celtic Star Books website, just click on the relevant link below to order your copy and when you do select the BOOK you want then add the T-SHIRT SIZE you require from  large, XL or XXL, adding that after your name so we’ll know which size to send you…(please note that all small and medium Invincible t-shirts are now out of stock).

The Celtic Graves Society to Commemorate former Celtic player and director Mick Dunbar
So just who were the Class of ‘55? Matt McVittie’s Celtic Story
John Hughes Tribute – Celtic did what Muhammad Ali had done and “shook up the world”
Previous ArticleBarkas first to be shown exit as Celtic begin summer business
Next Article John ‘Jackie’ Watters, Celtic’s D-Day Bhoy