You are at:Home»Latest»Ryan Christie sets huge target for himself this season

Ryan Christie has been absolutely on fire this season. After missing the last couple of games due to injury, the Celtic star returned to action on Wednesday against Hearts and immediately got himself on the scoresheet in what was his 18th goal of the season. Neil Lennon’s side ended up winning the game 2-0 to go five points clear at the top of the Premiership table.

The Scottish international has been the shining light for large parts of this season. He is the team’s highest scorer with 18 goals already this season (one for Scotland) and has been prolific in his playmaking as well, providing 11 assists. And now he has set himself the target of hitting the 20-goal mark before the end of the year. 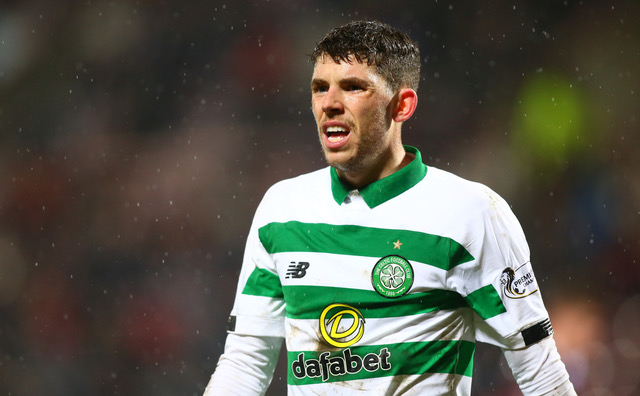 While Christie refused to reveal his target for the full season, while speaking with the Daily Record, he said:

“I know going into any game that I’m going to get one or two chances, and it then falls to me to take them.

“Luckily enough, right now they seem to be going in.

“I did set a target but I’m not telling you! I keep getting asked that, but if I get a couple more before the break I’ll be happy.”

Just for perspective, a 20-goal season is considered to be a great season for a striker. Thus, a playmaker managing to hit that number before January would be extraordinary. But you would not put it past Christie to achieve his target considering the form he is in at the moment. Celtic have three more games to play this year – against Aberdeen, St Mirren and the Rangers.

Here’s Ryan’s post match interview with Celtic TV followed by the highlights from the game!

WATCH Ryan Christie and Olivier Ntcham scoring the goals for Celtic as the champions moved five points clear at the top of the Scottish Premiership and reduced Hearts to their sixth winless game in a row. Hearts are just one goal ahead of Hamilton at the bottom of the league and they are away to Hamilton at the weekend.

The Celtic fans were chanting about relegation for Hearts last night. Delicious so it was but the best chant on this was a number of years ago when Dundee Utd were in that position and in a game up at Tannadice the Celtic fans sane Vera Lynn’s wartime classic ‘We’ll meet again , don’t know where, don’t know when, but I know we’ll meet again some sunny day”…it was a great laugh at the time and is still amusing!

The Celtic manager’s comments are also worth listening to. He doesn’t need to mention the Rangers by name but he makes sure they know that the pressure is very much on them as they go through to Edinburgh themselves tomorrow night to face Hibs – who are much better than Hearts at the moment – at Easter Road.

Jack Ross’ side will fancy their chances in a match that the Rangers really must regard as ‘Must Win’. December is beginning to look as difficult in reality as it did on paper for Steven Gerrard’s side who are now FIVE points behind the Treble Treble winners.