“Defeat may serve as well as victory to shake the soul  and let the glory out.” – Edwin Markham

“The eye of genius always has a plaintive expression and its natural language is pathos.” – Lydia M. Child 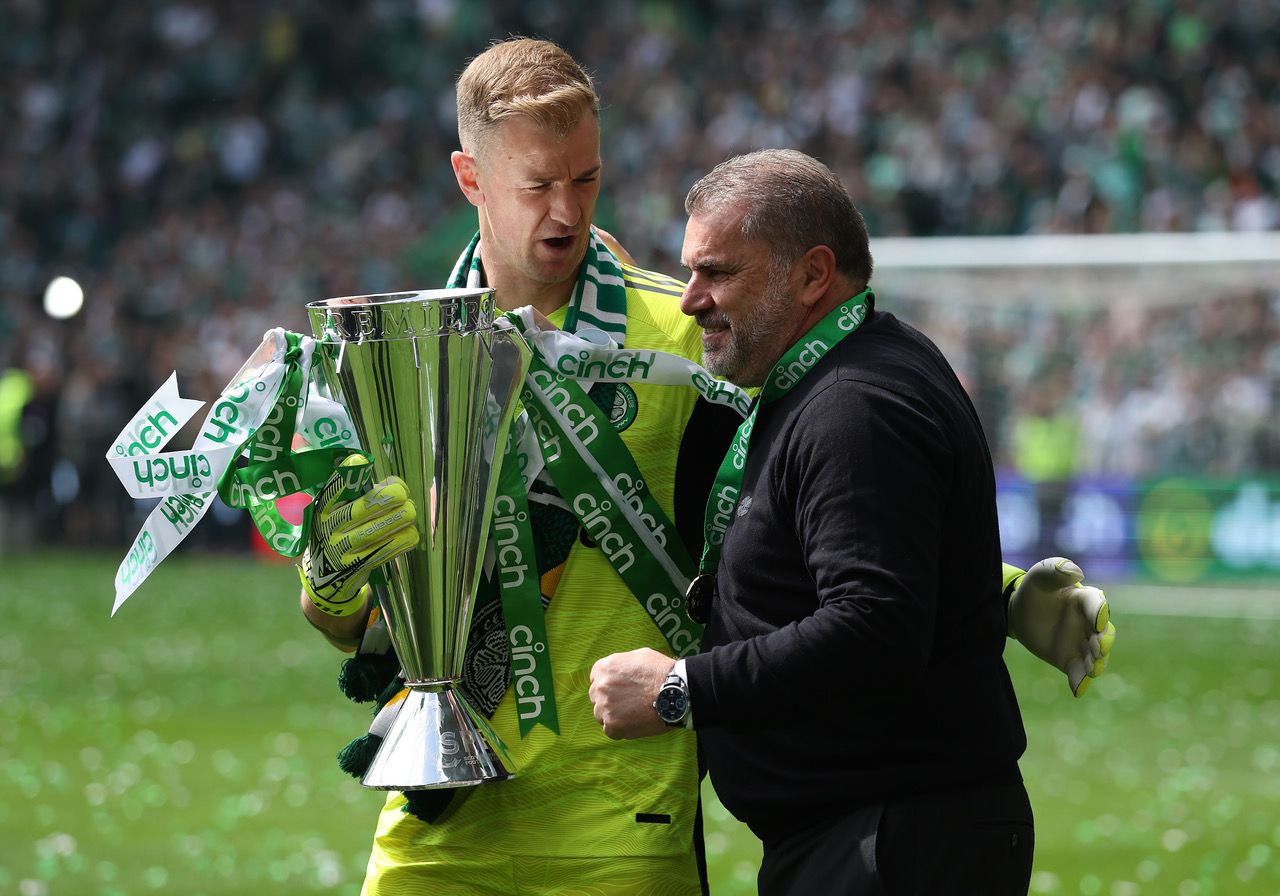 ROXIE – 7/10 – “Big Joe! Big Joe! He passes like Pirlo!  Na Na-naaa, Na-Nanaaa!”  He also executes textbook headers and occasionally  feels the need to use his hands. 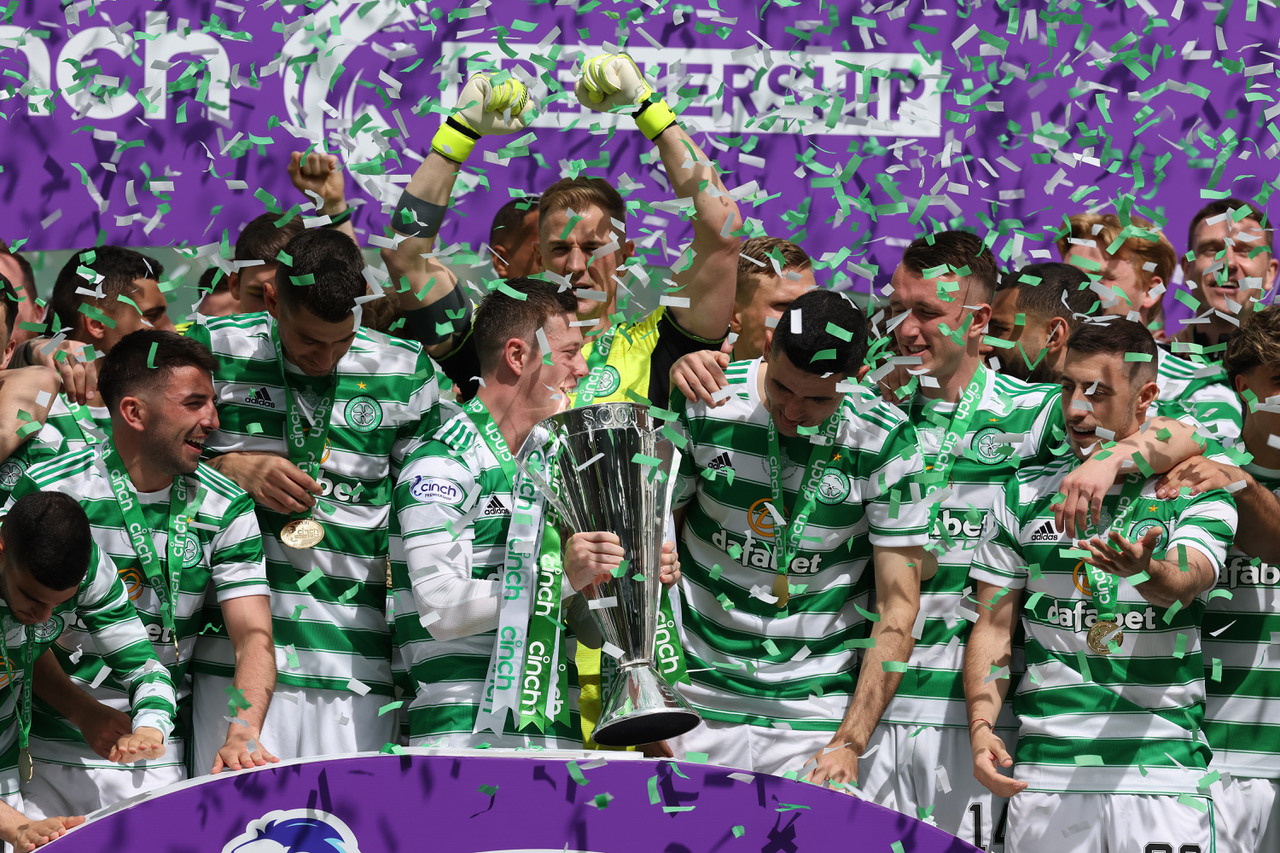 GREGGS THE BAKER – 6.5/10 – The prime example of not stopping – his game was  again all about the mentality that’s secured him the  jersey. Here, there, and everywhere in their faces;  Like a discarded sausage roll bag blowing around.

STAR LORD – 6.5/10 – Scene of the day – the racoon standing behind their goal jaw-dropped, hands wide in perplexity trying to  work out how the boss’s managed to miss with that  header. So close, yet so far, to his first Celtic goal – obviously a Shelby bookies scam. And then threw in his ubiquitous self-destruct moment by trying to
give Joe something to do late on with Motherwell’s  best through-ball of the day.

GET CARTER – 6.5/10 – Made of rockcrete; spent his lunchtime bouncing  around big angular plastic hardmen forwards as he  auditioned for the big American event of the year –  the part of “The Thing” in the Fantastic Four movie reboot. 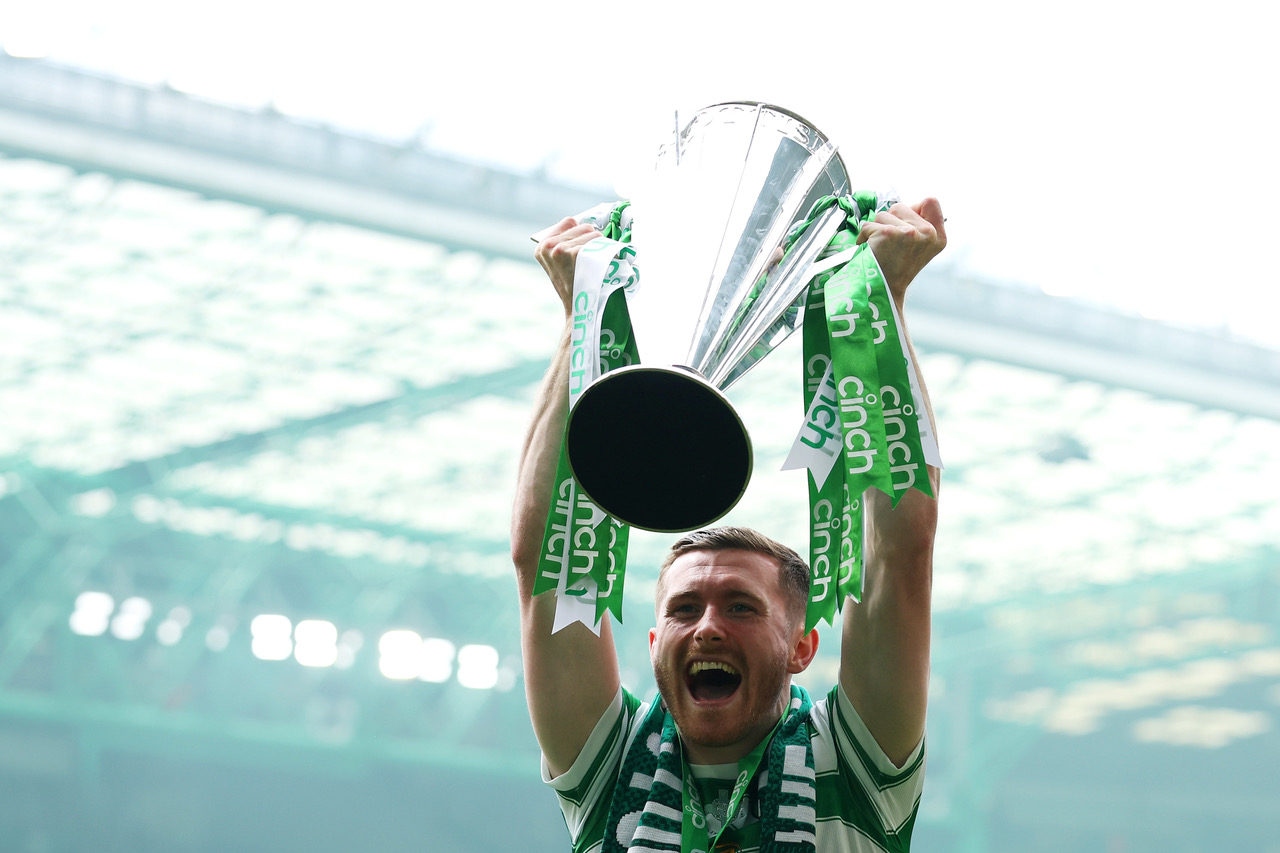 TONY THE TIGER – 7/10 – The Ralstonado tearing up the wing has been a  sight to behold. If today was the showcase for  next season, then he’s enhanced his chances of  retaining the spot with some wicked crossing on top of the tireless supporting runs. 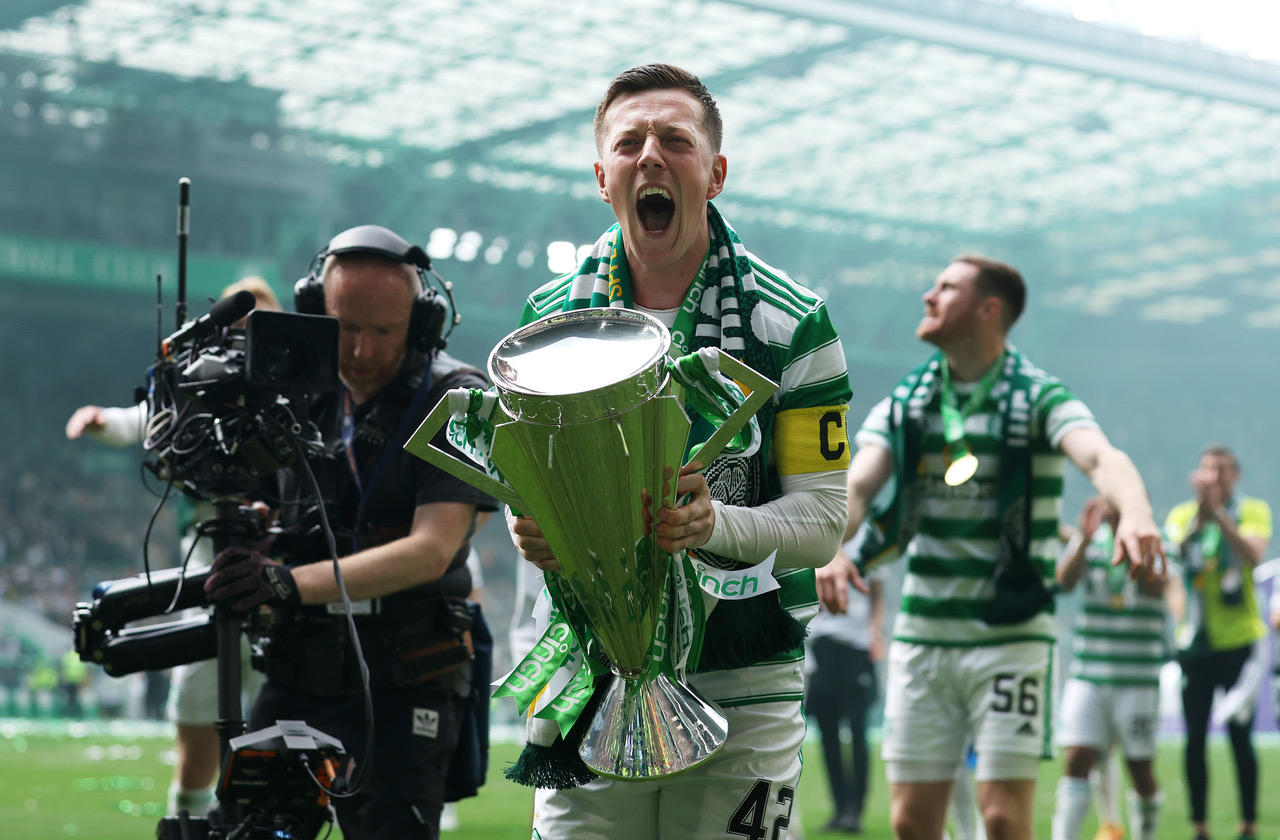 CALMAC – 6.5/10 – Skip the light fantastic. Our skip strolled in  the sun, drinking in his inaugural 90 minutes as title-winning captain. Should have had shades on  with the mask as he basked deservedly in the  glory, pinging passes around with a grin. 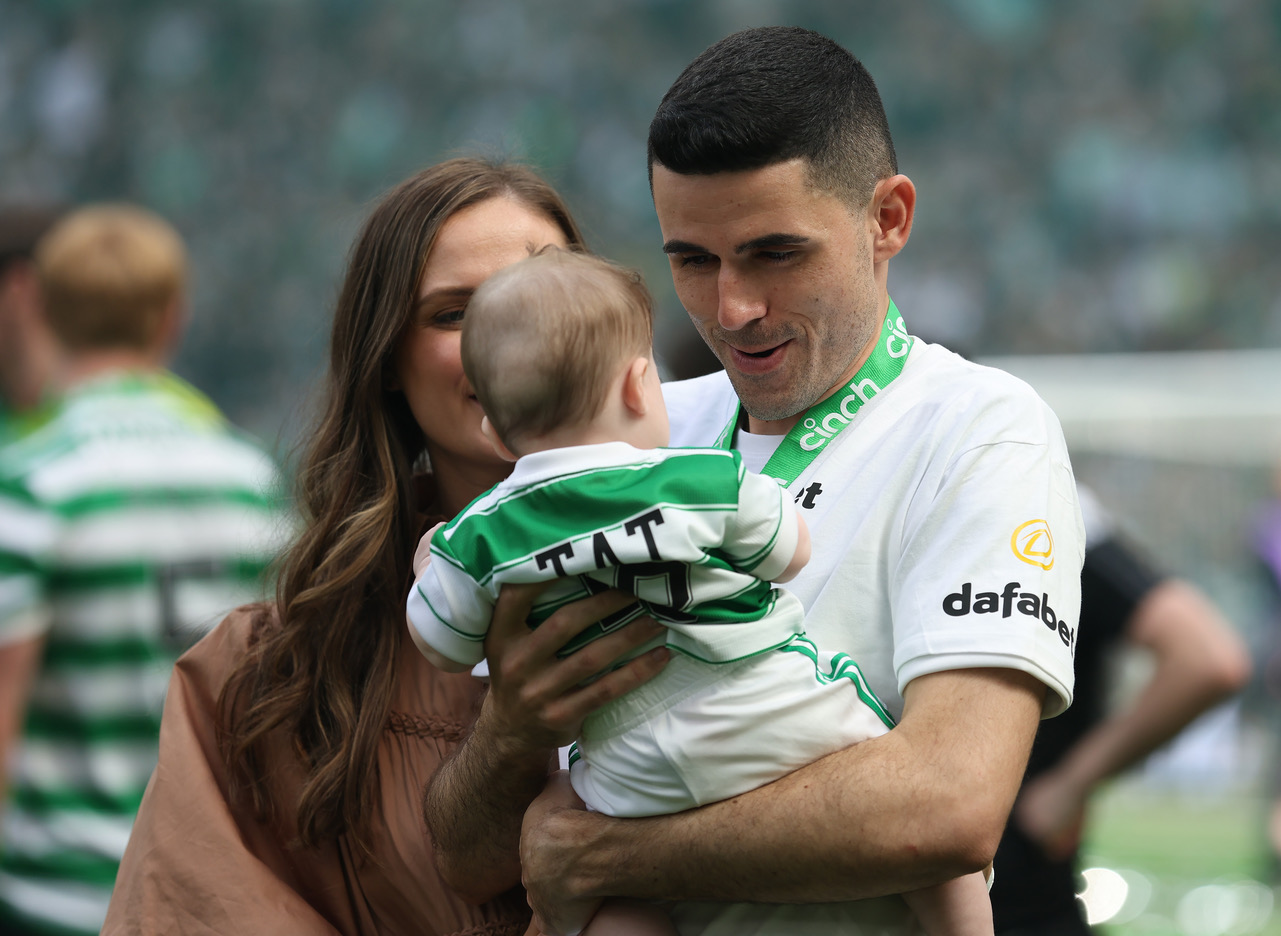 OZ THE MAGNIFICENT – 7/10 – Rivers, man, rivers… Who cut the onions?  An unwelcome sight on such a joyous day: the final appearance of a Hooped maestro. Such a  shock to dull the edge of glory; a loss to our guile and invention that we’d seen a glorious reprise of in this campaign, and surely vital to  our Champions League hopes…

But no – this time it’s for real. Oz’s magic slippers are clicking together and he’s going home for good. No! Noooo!

Ah, well… A traitorous post prevented a fitting  finale with a Rogic goal to complete the scintillating highlights reel of a modern-day legend. And when his number came up for the last time, The Wizard himself couldn’t maintain that illusion of beatific calm and choked with the emotion.

Didn’t we all… And still are. So farewell to a beautiful Skelping man and footballer.

EDDIE TURNBULL – 7/10 – “Motherwell? Did I used to play for them? Hibs, surely?” Confused, the old boy took a little while to settle, but thereafter we got glimpses of his  invention and sweet ability that had us anguishing over his cup final injury. Maybe he’s the hope we need for midfield mastery. 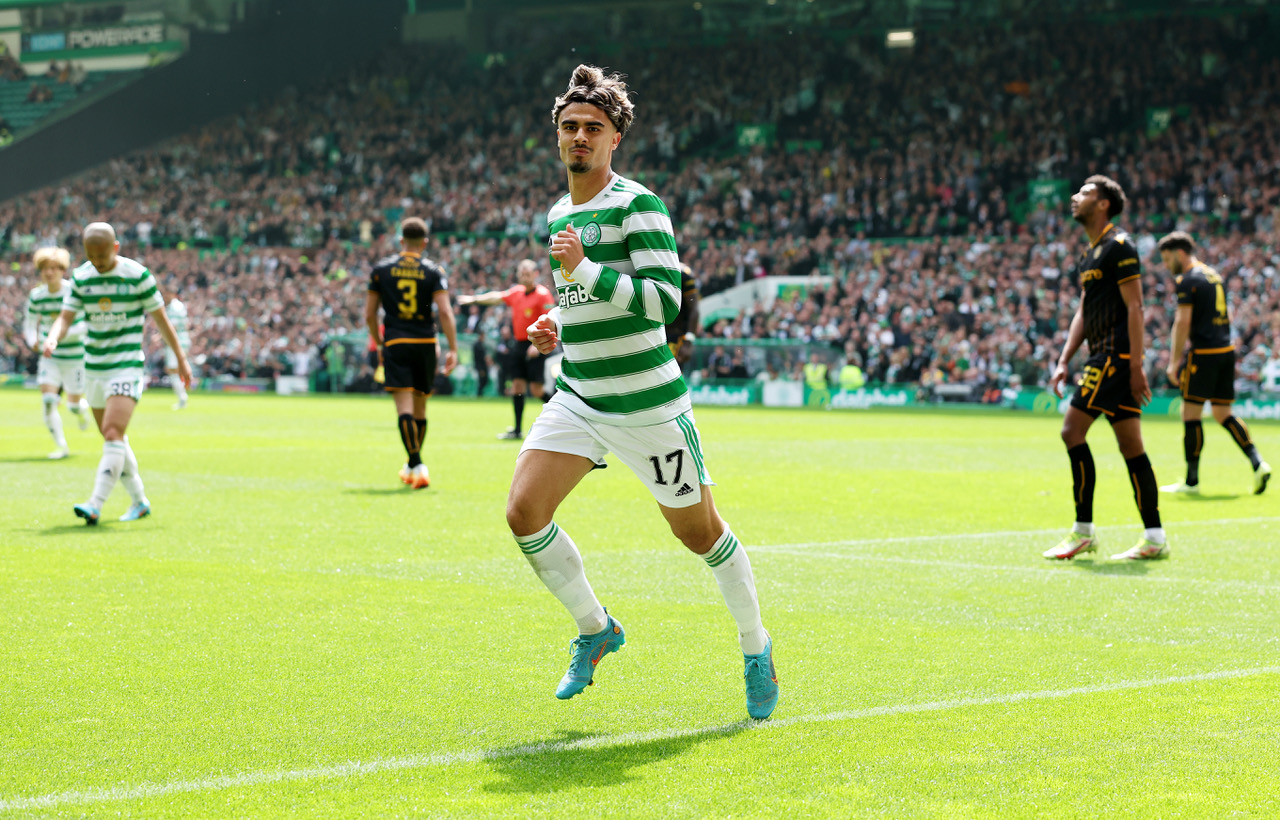 NOTEBOOK – 8/10 – Currently getting a jaggy bunnet from big Joe  in the dressing room after snatching away
the world keepie-uppie title from him with some juggling magic early on. Then proved a real headache for the ‘Well  defence with his lively dynamism, echoing the prancing frivolity of the Wham Rap! video.

Ultimately, got a deserved last goal of the season that was a yard offside. Just to annoy the Zombies a little more. Should we retrospectively agree to disallow it as a gesture of goodwill and prelude the  forthcoming introduction of VAR? Yes, if it’ll make the New Club feel better about being pumped by 20 goals instead of 21, then we have to do all we can as it’s ‘be kind  to animals’ weekend.Because on Wednesday it’s Spanish riot cops’ ‘Smash A Donkey To Hell Day,’ apparently. Whatever that entails…

LORD KATSUMOTO – 7/10 – Buzz, buzz, buzz. Non-stop terrorising of Scotland first-choice right-back (nolaughing)Scion McDonegal. At you like a hungover wasp, with a sting to ruin your game, breaking-up,
breaking-out, setting up, and scorching the turf  with his pace. People wonder if he’s even got an off-switch. Don’t be ridiculous; he’s Japanese – Ange works  him by remote control. 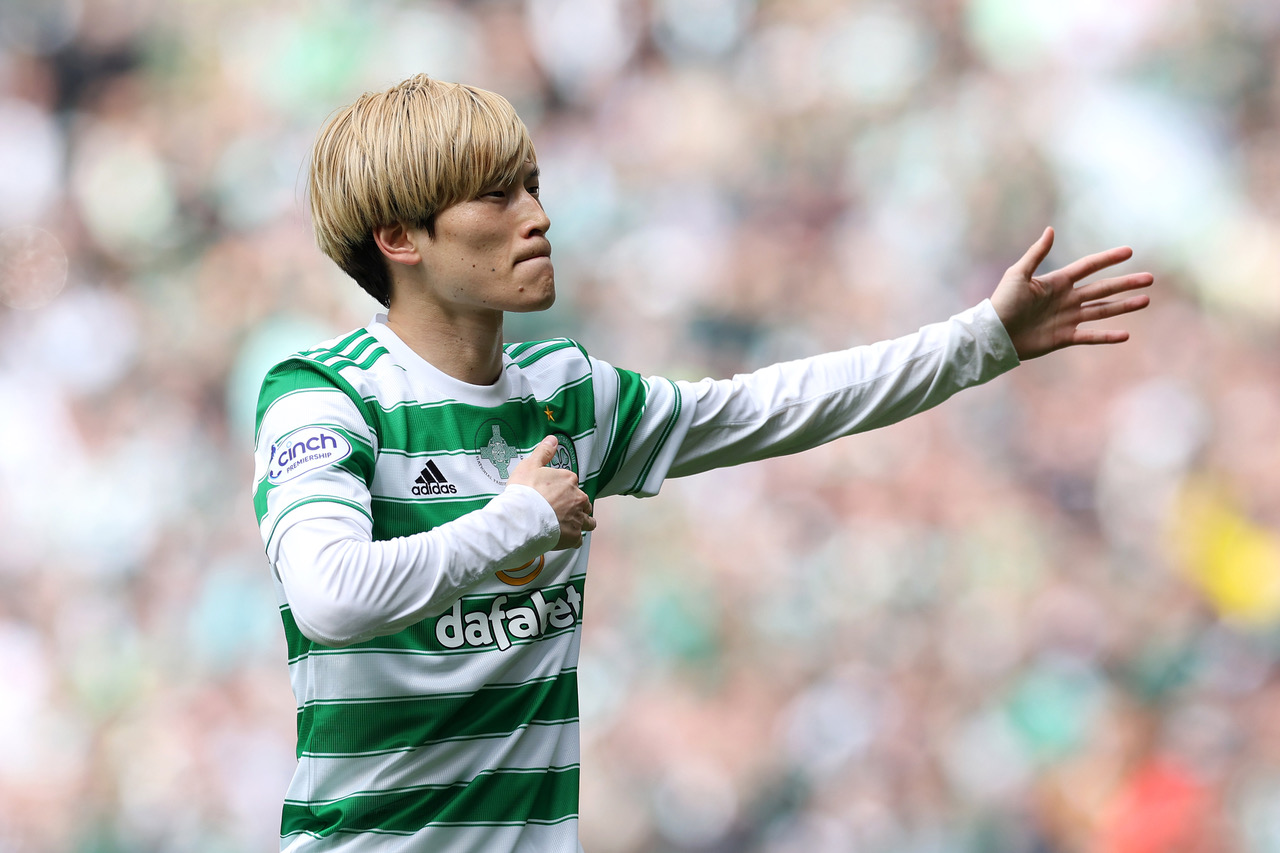 MR.KOBAYASHI – 8.5/10 MOTM – The Samurai blade is sharp – a work of art by master swordsmiths, conceived of many-folded steel layers, honed to perfection. Our cutting-edge got blunted mid-season, only after showing us what he’s capable of. Now we can see what may come with rest and  recuperation – incisive, deadly, glinting strikes  in the (rising) sun that take your breath away. Two finishes of intuitive ability, executed a mind-step ahead of opponents. And me. And you. Can’t wait for next season’s Kyogo, already. 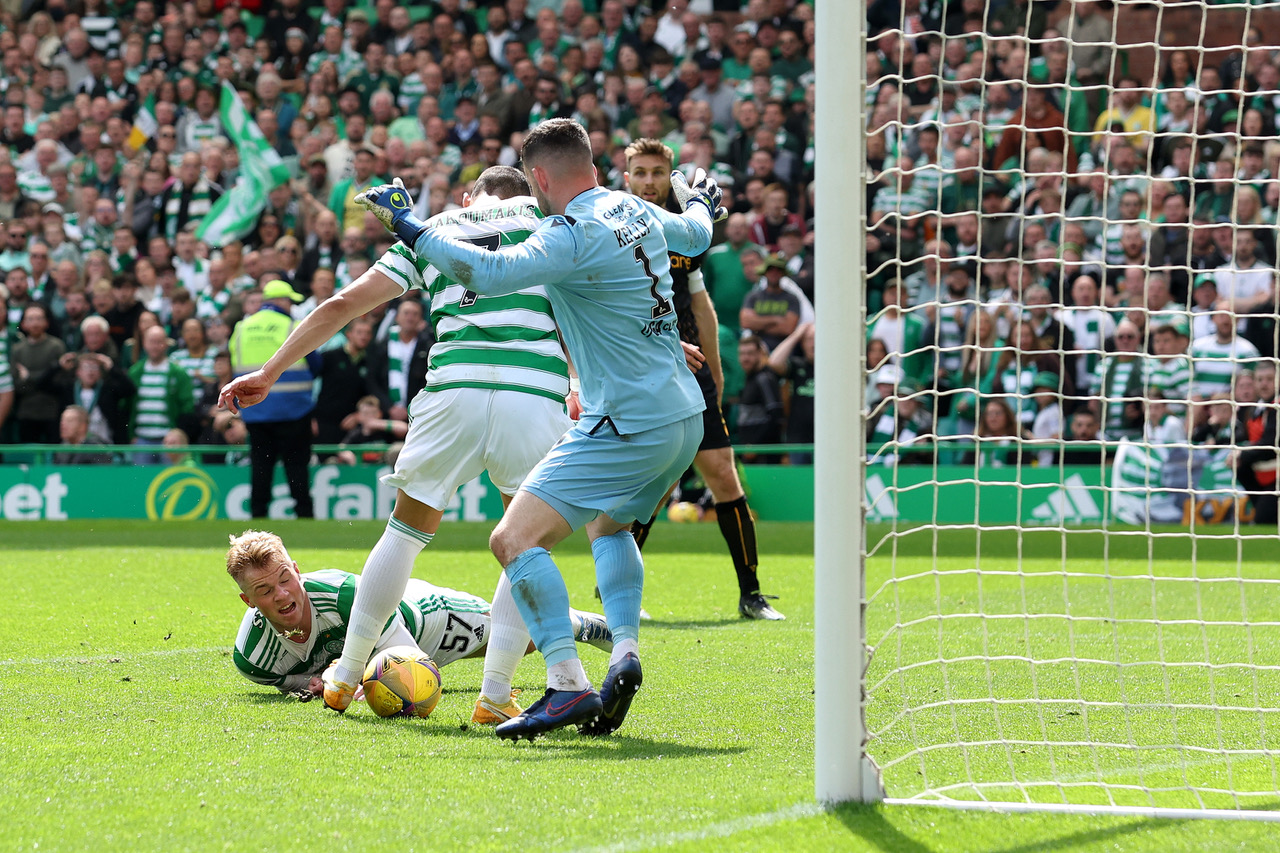 SON OF JACKIE – 7.5/10 – Anything you can do… How about that for a finale? The Greek Denis Law, The Handsome Wayne  Rooney, The Skelper-In-Waiting, gave us a  moment to enthral with acrobatics not seen
outside Alfie’s wife’s lover’s bedroom.  Then he capped it all with a comedy injury-time  finish, scoring with two-touches for only the second time in his Celtic career. Another who, when fully-fit, has you salivating  for August.

MCCARTHYISM – N/A – Entered amid the farewell furore, looked like he enjoyed himself, particularly when he skittled over Jackie with a goalbound strike.

TAMAGOTCHI – N/A – Done up like Steven Segal, it was interesting to see how the 4th Samurai segued into Angeball. Couple of moments raised interest – particularly  a deft side-footed pass out of trouble outside our box that had the beguiling air of Turnbull about it; until someone told me, against my  insistence, that it was actually Tamagotchi. That’s non-racially discriminating beer for you.

RAQUEL – N/A – As if the day wasn’t glamorous enough, on she comes and floats around; floating in the air at one point, nearly connecting her divine head  with the sixth before Jackie bundled it in.  Just as well – might have ruined the hair. 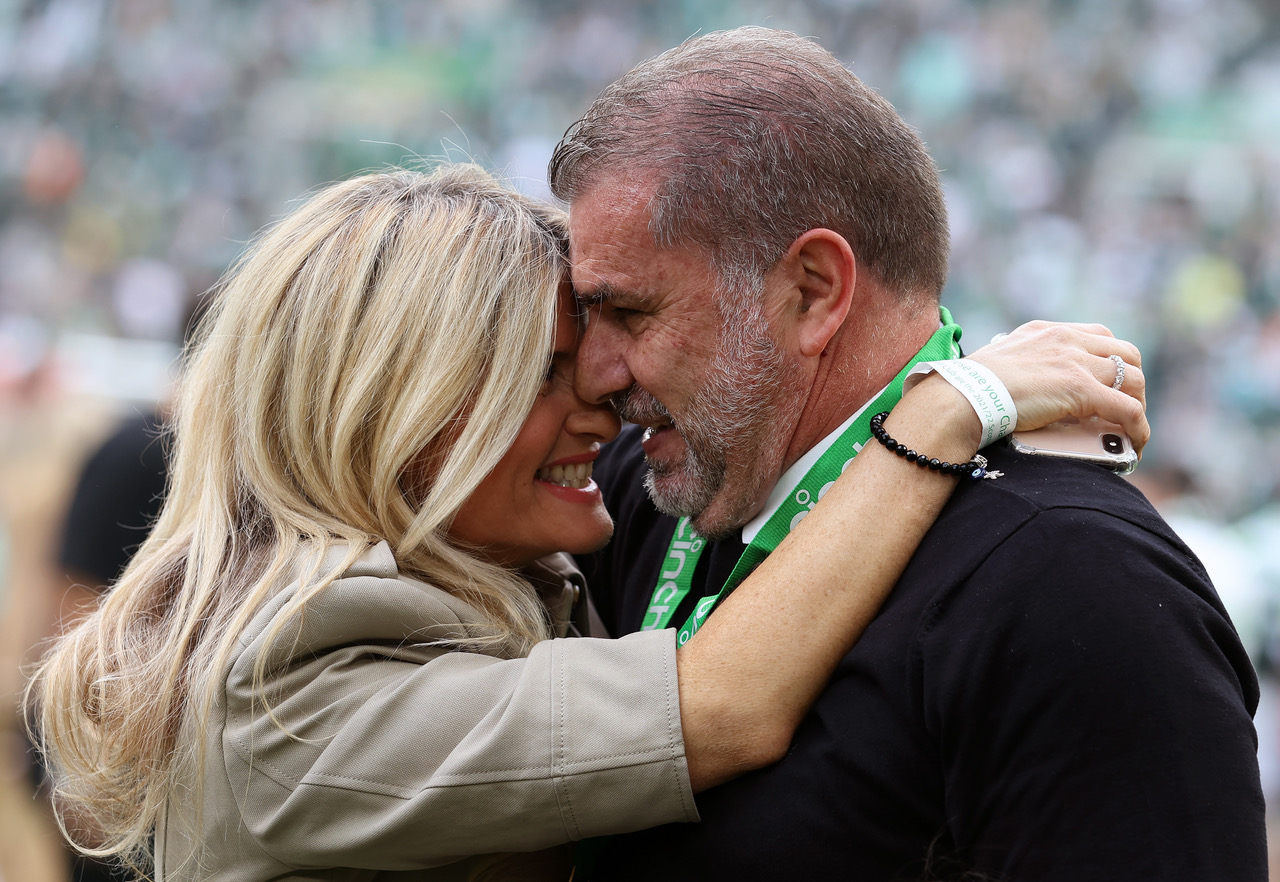 ANITA DOBSON – 9/10 – He delivered, completely. Set the side up for  verve, and no little pathos – gave the big players the big moments their fantastic Celtic careers deserved, and enjoyed his own spadefuls of well-earned adulation. And it was sunny, just like home. But he still wore a jumper. Point off for no taps aff…

MIBBERY – 1/10 – Showed early promise by intercepting a pass as we sought to open them up. But pretty soon the calculator in his Casio digital watch finished the calculation it had been working on since last Saturday, and to his gall he  realised a 10-0 defeat for us wouldn’t result in a 5-point deduction, therefore all MIB hopes were truly lost. Somehow made it through the game, taking our emotional moments to shed tears of his own for… Other reasons…Then choked at the sheer audacity of the Bhoys to score in the little injury time he added, giving him his own personal little Boby Tait moment. Was last seen greetin’ his eyes out in the car park. 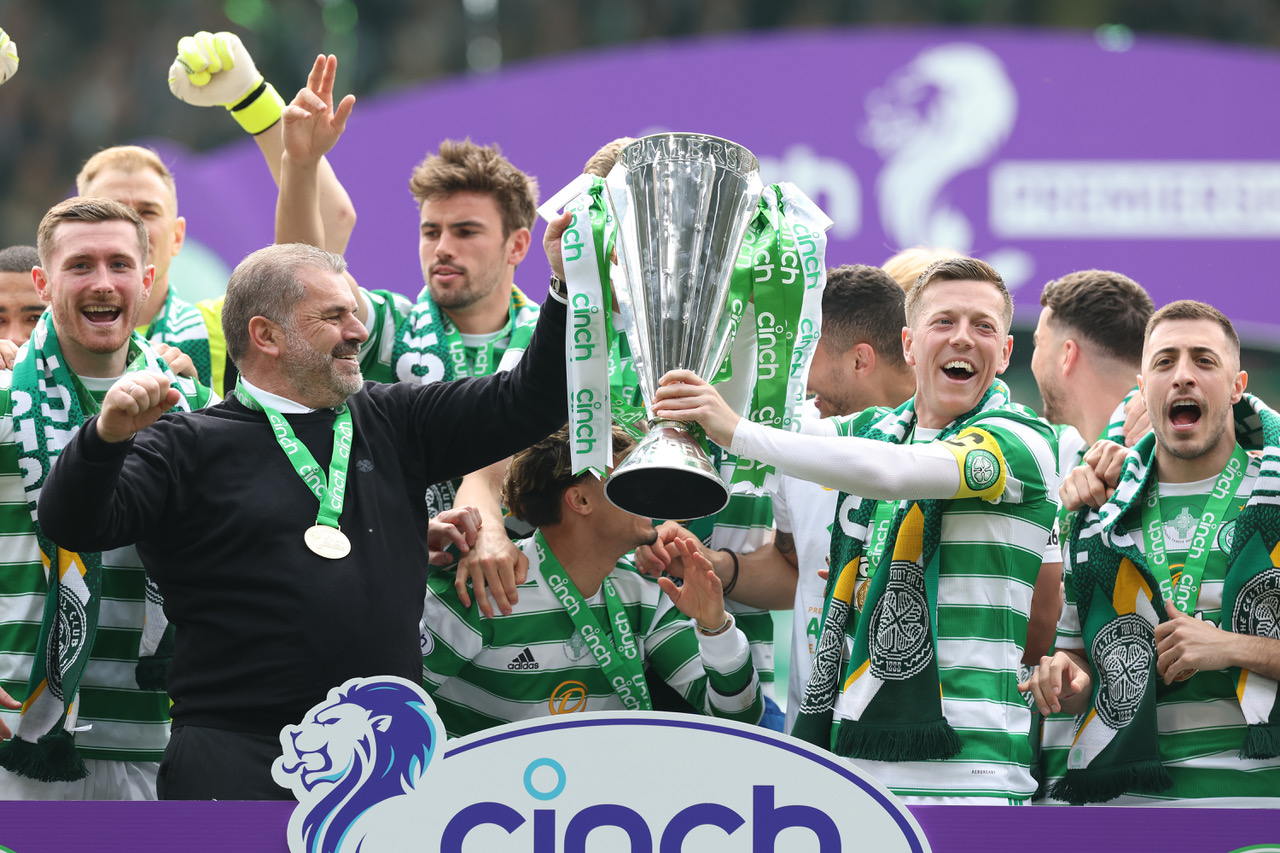 OVERALL – 9/10 – It’s such a perfect day, I’m glad I spent it with you…Not a dry eye in the house. Tears of joy, sobs of farewell. Glory in green and white, sunshine over sorrows – we got everything we wanted on and off the pitch and memories to cherish. Such a fine win to cap it all off and conclude a season that will live long in the pantheon of great Celtic triumphs. Goals of quality, and flashes of greatness that wowed the galleries; and that was without Jamesy.

The curtain was brought down with a flourish, we left this exciting stage with heavy hearts but uplifted spirits as we imagine the shape of things to come. It’s been emotional. To say the least.

Until I pitch in some insane gabbling one last time with the season review. Gimme a week.

Celtic boss Ange Postecoglou reflects on winning the cinch Premiership and looks ahead to the future! 💚

P.s watch out for THAT tackle from a security guard🤣 pic.twitter.com/piTuSozXK9