“All I insist on, and nothing else, is that you should show the whole world that you are not afraid. Be silent, if you choose; but when it is necessary, speak – and speak in such a way that people will remember it.” – Wolfgang Amadeus Mozart 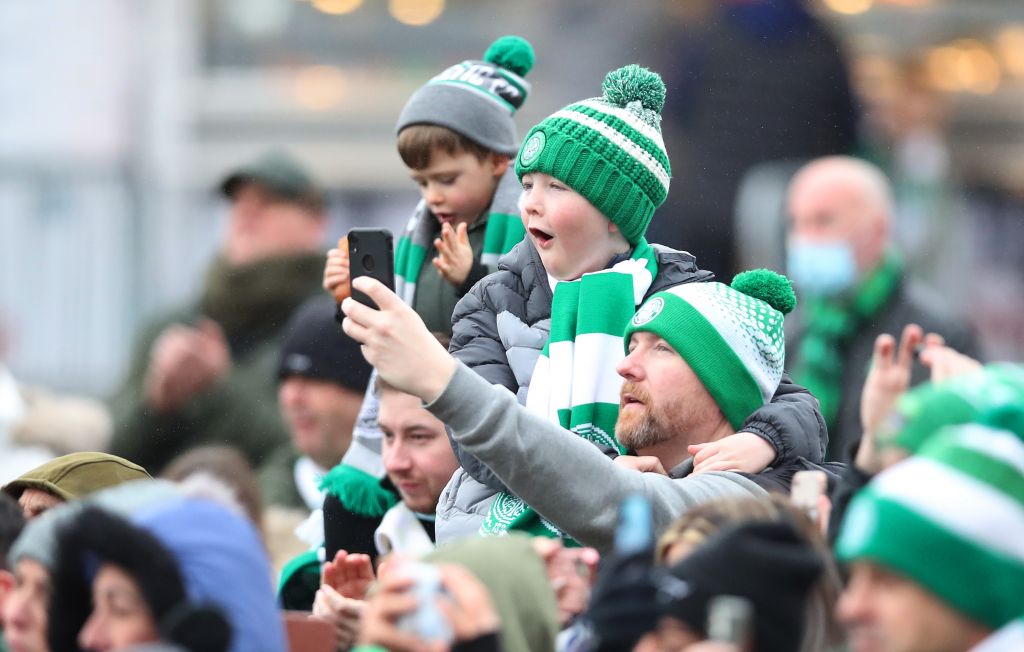 Fans of Celtic look on prior to the Cinch Scottish Premiership match between Celtic FC and Motherwell FC at on December 12, 2021. (Photo by Ian MacNicol/Getty Images)

ROXIE – 8.5/10 MOTM – The hair’s not magnificent any more, but the goalkeeping is. Showgirl of the game for me down to THAT save – a game-changer if you ever saw one. They score, our heads are down, they’re leading, buzzing and the striker-less hill becomes a mountain. Goal-tenders make a crucial difference, kids. With Celtic it’s mainly presence, truly judged on Euro games versus superior opposition. But when the domestic struggle is highlighted as today, with squad threadbare and a nascent sense the opposition – on a good run of form – could snatch something, the spotlight can turn on our six yard box. And this showgirl handled the limelight moments like a true star.

JURAN JURAN – 7.5/10 – Like Simon Le Bon in the 80s, he was flaming everywhere. But our Juran’s not a poncey player with a leaky yacht. He’s showing the battling, competitive attitude needed to get us
through tricky fixtures; aligned with some class today, we seem to have picked up a winner on the cheap.

GREGGS THE BAKER – 7/10 – If only his sausage rolls were this hot. I’m on a poor run of purchases, middling warmth to lukewarm, but Greggs has suddenly returned to the fold with purpose and energy, exemplified in today’s tough, determined 90 minutes. A fine, fine game.

STAR LORD – 6/10 – So quiet and assured, it was as if he had turned to opium to quell the violent urges. For sure, the Arthur Shelby grit was apparent as he manhandled their rough and ready strike force, but the voices in his heid were subdued until the now customary Star Lord moment of tomskullduggery near the end when the film critic pick-pocketed our Peaky Blinder. We survived it, but he must have felt the disapproval of Aunt Polly looking down.

GET CARTER – 6.5/10 – “Have it!” he screamed in a Lancashire accent as he hoofed a few skyward. He’s a big man and he did a big man’s job against not out-of-shape opponents who didn’t give him much respite. These matches are made for him, up against a human windmill and the Scourge of Barcelona, and for the most part we got what he’s paid for – strength and durability at the back. 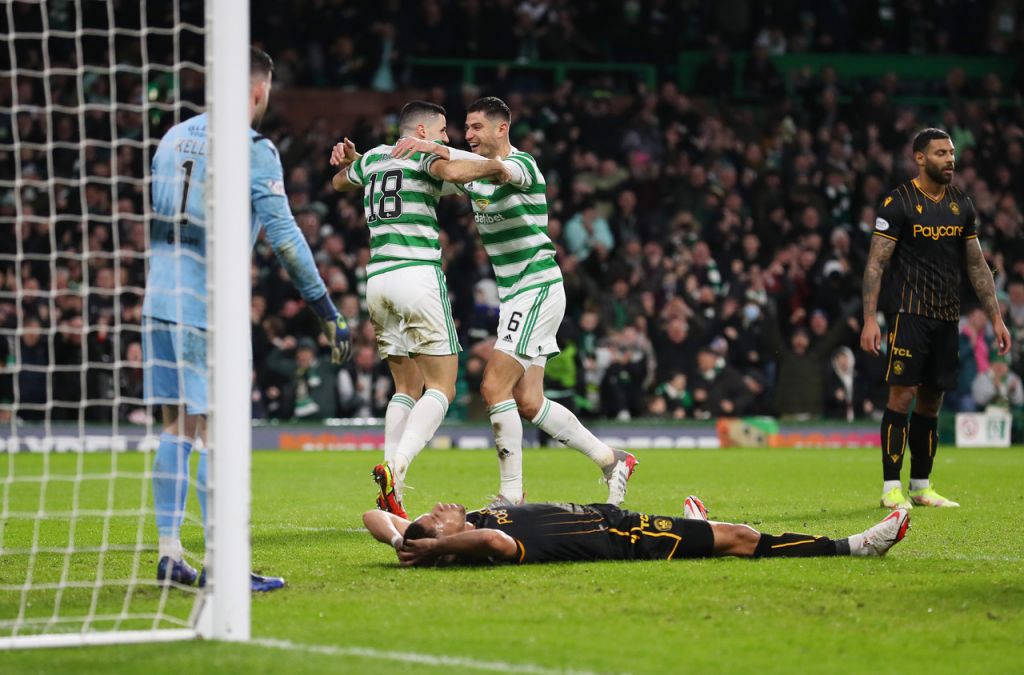 Tomas Rogic of Celtic celebrates after scoring their side’s first goal with Nir Bitton during the Cinch Scottish Premiership match between Celtic FC and Motherwell FC at on December 12, 2021 (Photo by Ian MacNicol/Getty Images)

BLOCKCHAIN – 6/10 – An unusually reserved performance. Sat in the DM role, we got security as expected but I also thought there would be more probing – on a Jamesy night-out level of effectiveness.

CALMAC – 6.5/10 – A lively and industrious game for the sensational skipper more than a guileful one. He set the tempo and was required to work overtime to maintain it against a press they sustained longer than most SPL sides. But persistence beat resistance. 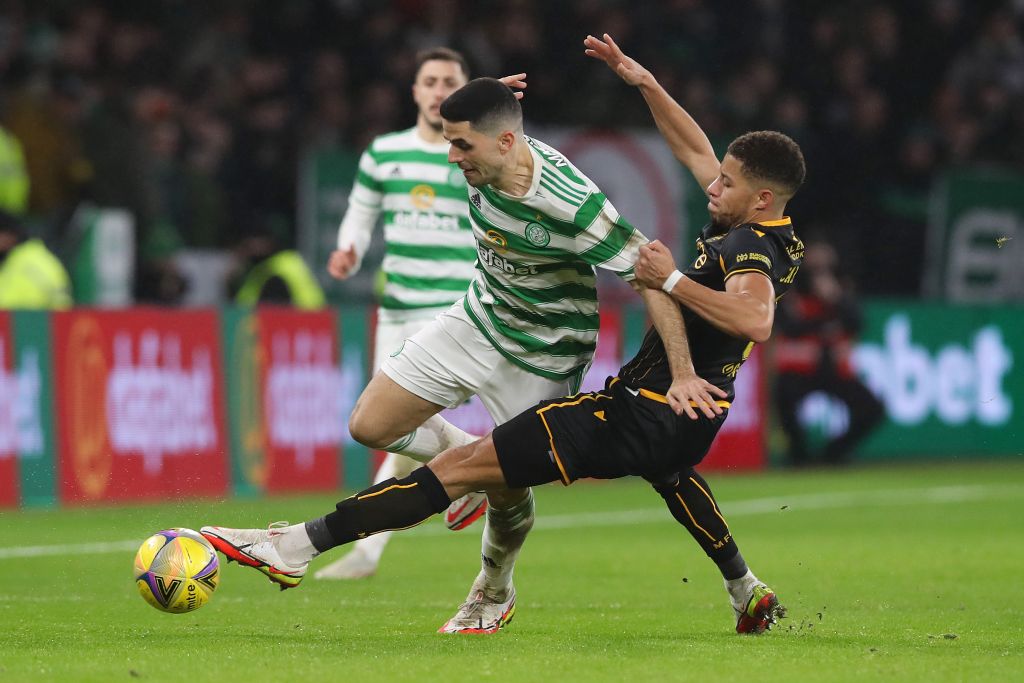 ROGIC – 8/10 – I love this man, in a Butch and Sundance way. His magnetic ball-attraction is the envy of Christmas party slappers everywhere. Some of the footwork is sumptuous and beguiling, the finish for the winner precision quality. The other misses, pure lazy pish… That late one with the side-foot from the Juran/Ralston factory of creativity cost him the MOTM. How can such a baller miss such a chance? As if he did it just to make all the mere mortals around him feel better about their daily grind. 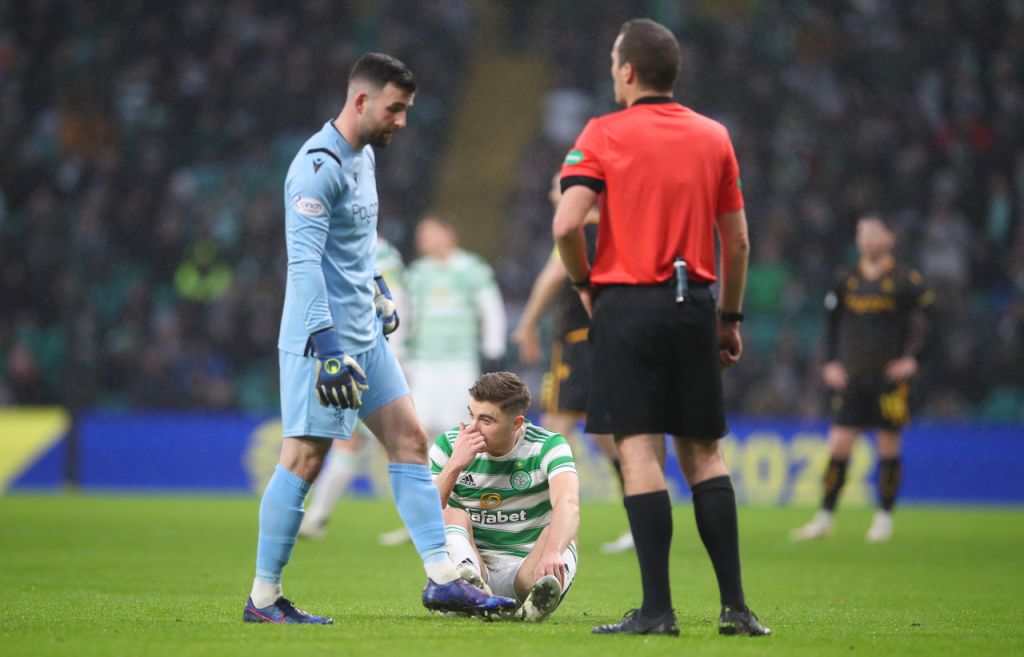 James Forrest of Celtic looks to be injured during the Cinch Scottish Premiership match between Celtic FC and Motherwell FC at on December 12, 2021. (Photo by Ian MacNicol/Getty Images)

JAMESY – N/A – “Fancy it?” Naw. Almost opened the scoring then early bath due to pulled baw.

Happy Friday troops, let's lift the mood a bit and remind ourselves of the time James Forrest tried to get his hole during a Celtic tv interview. pic.twitter.com/znE2fQPror 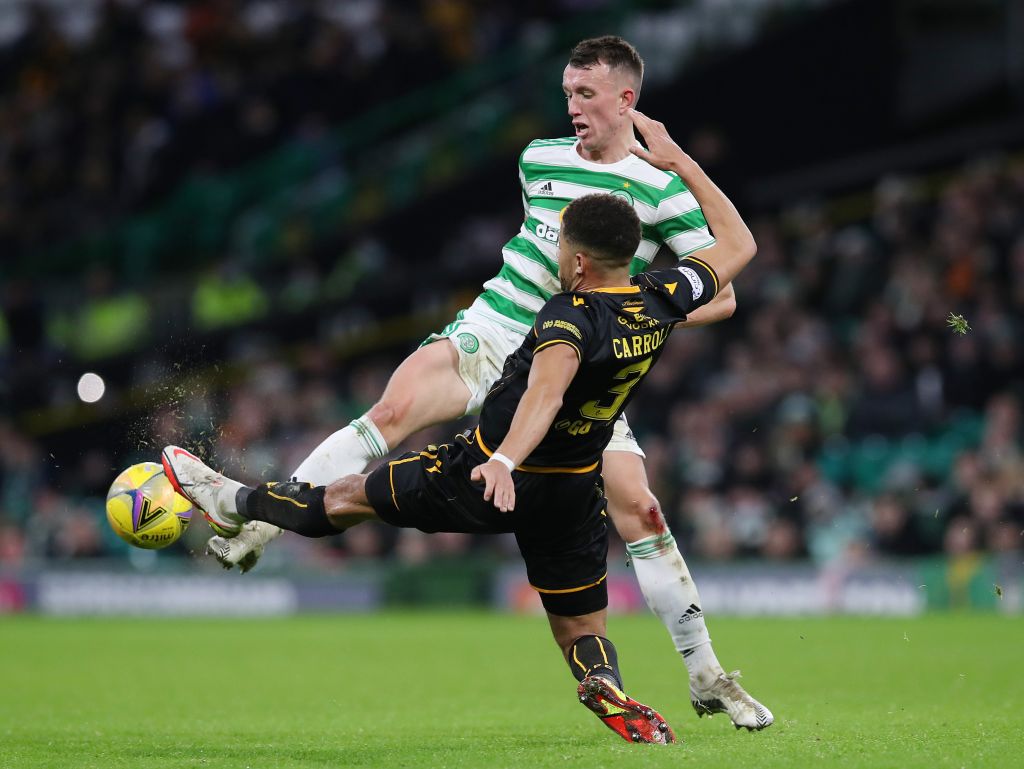 David Turnbull of Celtic is tackled by Jake Carroll of Motherwell during the Cinch Scottish Premiership match between Celtic FC and Motherwell FC at on December 12, 2021. (Photo by Ian MacNicol/Getty Images)

EDDIE TURNBULL – 5.5/10 – He’s not centre-forward. Always right side of the Famous Five, it was a tall ask for a resurrected 98 year old to carry the lone striker role. Still, he’s got the footwork but was overwhelmed by the role today. So used to MOTM awards, this afternoon he wins the Gimp Suit for the completely spazzed-out long-range effort that troubled the sleeping Green Brigade more than the backtracking keeper.

ABADASS – 5.5/10 – Not on it the way we required. Floating too much, indecisive and drifting off the pace of the game when he should have been a main threat. He lasted 90, somehow, but currently exhibits the classic inconsistency of a young player trying to find his feet again after blowing out. 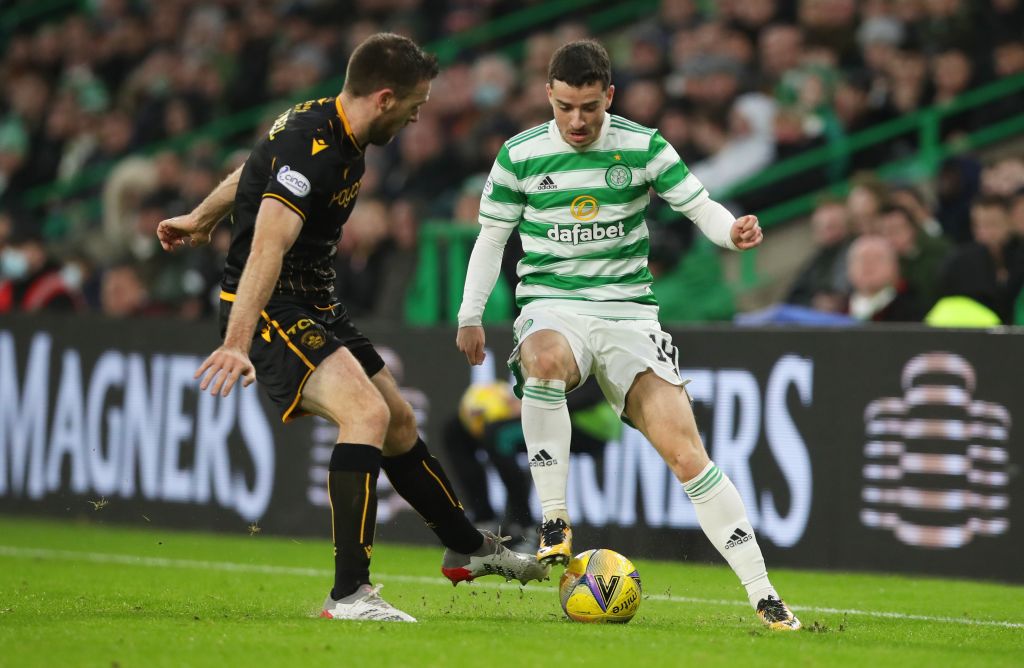 : Mikey Johnston of Celtic battles for possession with Stephen O’Donnell of Motherwell during the Cinch Scottish Premiership match between Celtic FC and Motherwell FC at on December 12, 2021. (Photo by Ian MacNicol/Getty Images)

MIKEY J – 6.5/10 – On quickly, then off just before the end – paying a fitting tribute to the hectic sex-life of the man he replaced. Mikey was at his most impressive for a while; weight of expectation brought out his better characteristics and he was positive and focussed, going for it without second-guessing himself.

TONY THE TIGER – 6/10 – When he appeared like Spiderman on the touchline, I relaxed. One magnificent pass, one crucial block/clearance. Superhero cameo. Game over, Lanarkshire Bears; No Way Home. 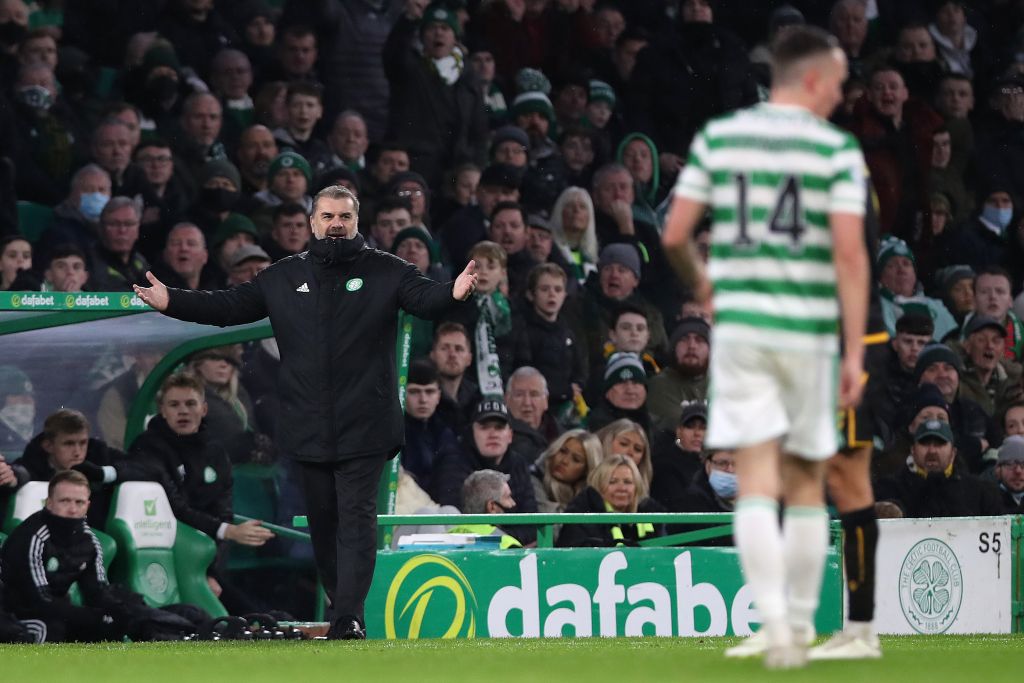 Angelos Postecoglou, Manager of Celtic reacts during the Cinch Scottish Premiership match between Celtic FC and Motherwell FC at on December 12, 2021. (Photo by Ian MacNicol/Getty Images)

ANITA DOBSON – 7.5/10 – A great result, attained through gritted teeth for the most but Ange played the cards he could, as well as he could have. Now he has to go again. And again. Little choice, but plenty for him to mull over as his selection possibilities slim down to my name being pencilled-in for the Euro squad and half the
punters who can still touch their own toes are on-call for the Festive schedule. Good luck, Ange. Celtic Nation’s behind you. You, not your bosses…

MIBBERY – 5/10 – A fine effort from Mr.Anderson as we await his return in the new Matrix movie. But we’re a team full of Neos and the wicked analog of Masonic mendacity couldn’t quite cause the damage he invited Murderwell’s physical approach to. In summary, a poorly-coded dic. 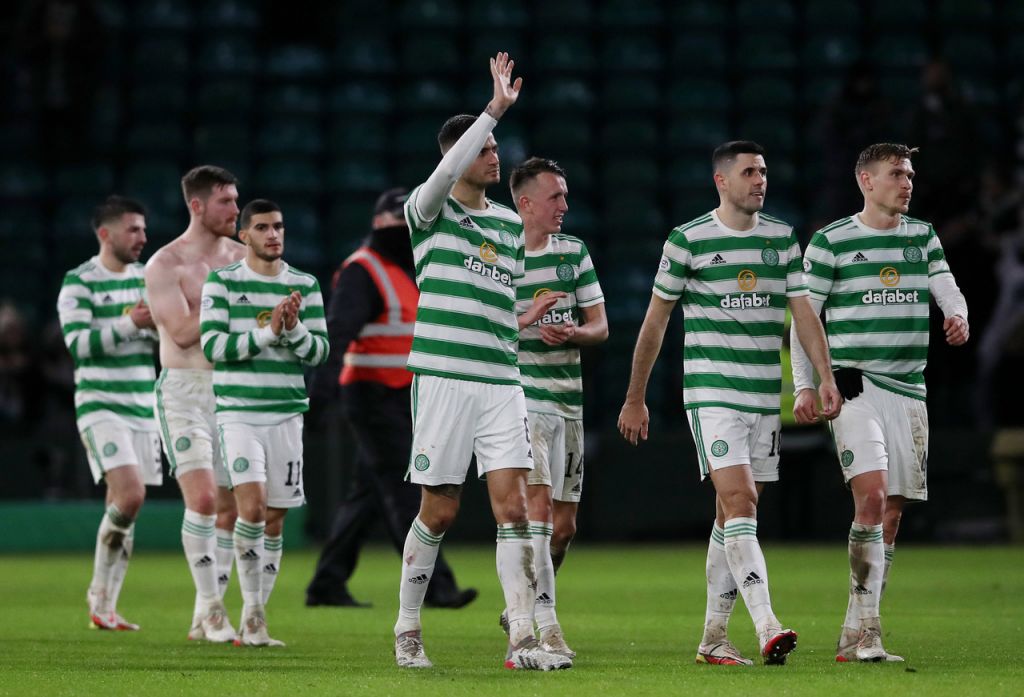 Players of Celtic interact with the crowd following the Cinch Scottish Premiership match between Celtic FC and Motherwell FC at on December 12, 2021. (Photo by Ian MacNicol/Getty Images)

OVERALL – 7.5/10 – Silent protests are Craigy Whyte. I’ve had enough of it. Just my POV, but back in Jungle days, the team got the backing then the board got the full, vociferous treatment during lulls in play. Those sterile suits are never fazed by silence; boardrooms overflow with tranquility; it equals stability and governance to them. What they fear is chaos – racous, hostile rebellion from loud, passionate rebels. What they fear is their names being slaughtered in public by thousands as they sit in conceited governance with their hospitality marks, and booming over the airwaves as middle-class housewives lunching in bars ask, ‘Why is this Bankier chap considered so much of a flanker?”

Just my thoughts. In spite of the low murmurr of anticipation that Murderwell thought was a home game, the players lifted themselves and saw out a vital 3 points. One of those title-winning digs that emboldens us and niggles the gourd of the Govan supremacists. Now we plough into a significant period of cup finals – including
an actual cup final. Win them all, Celtic; eyes on the prize, get at it Bhoys. We’re right behind you. Well, mostly. They come at night, mostly…