“Young and strong on the wings of tomorrow
Rise up in millions, get off your knees
Dispelling the demons

Is he a Daisy or is he a Bo? He never got tested, so we’ll never know. Did what he had to do well. Got to shout ‘Keeper’s’ a lot and wear seasonal purple with lime piping and fetching grey gloves, so the observational flamboyant in our support will be pleased.

I’ll have one of yer Xmas pasties while you check back up and down the flank… Then, festive surprise – he pops up in the Killie box only to be promptly brought down. A foul’s a foul, as they say everywhere on planet football except the ludges of this bitter-wee-hate-pit and so it transpired as Robertson the ref betrayed his membership of the eccentric appreciation society set up in honour of a former German international and seemingly populated entirely by Scottish referees. Greggs must have been observing Drexl closely because he’s added some energy and positivity and was a more aggressive presence all day down that left. Let’s hope we’re not paying him in brown stuff, though, as he still can’t cross for it.

Was in the huff for the first ten minutes because the kitman refused to replace his surname with ‘Kristiano’ on the back of his jersey. So as he sought to re-brand himself as a singular entity, did the ego distort the talent? Passing was guff but the metrosexual magic was still in the boots and today first-half he was channeling Zidane. Then Kristiano came to the fore again and bedazzled everyone; I reckon he’s possessed by the sprits of greats. Hoping Beckenbauer hangs around for the season.

L’eder was a beauty on Thursday and an 18/1 shot, sadly missed. So now that the serious money was on a repeat (my weans’ Xmas…) would he deliver again? Well, no he didn’t. And neither will Santa, kids, if you’re up late reading this; them are the breaks, ain’t life tough, character building, etc, etc. Get over it. Took a great save to stop him opening the scoring. Took a nasty whiplashed ankle to curtail his mobility but he soldiered on and put in an enormously encouraging game.

The Irish breed big tough horses and let them wander around the estates, if The Commitments is to be believed. So at least we know where the scouts found him. We tend to let this one wander around Paradise at his own behest. And such horse negligence occasionally breeds happy chaos – an uplifting clunk in off a hoof set us on the way and when that great neck snapped in the second like a catapult I realised what had happened to Shergar’s DNA. Credit where it’s due – Mr.Calamity turns Mr.Tumus with a performance straight out of the Chronicles of Narnia. It must be Christmas soon.

Big bad wall hit the wee Mhan on Thursday which might explain him cutting inside frequently as hanging too
wide spooked him. But he buzzed at them from the start of the second 45 and was prominent in shaking up Killie to a point of near-collapse.

The Great New Hope, our Ivorian-Scottish Broon, announcing his full SPL arrival with a cacophony of a display, rattling Killie heids like Sunday spire bells and dictating the middle so brutally the ghost of Stalin was seen in the stands drawing breath in through pursed lips. The miniature massai goes out to own it and we saw his plethora of attributes on display. Those Youtube clips that so impressed me way back seemed to be genuine indications of what we bought. His break-up play is so good my marriage is in trouble. And he has an electrifying switch-up ability which sparks off attacks from nothing. Man, this will get interesting.

Inspired by the new energy beside him, Calmac may be emerging from his long dormancy. Looked temporarily stunned again today by the verve around him as he played the Broon role and sat deep to tidy up. Still believes Soro’s a Xmas present from his wife. Pushed himself and his mhen forward from the first whistle of the second half and his generalissimo commands were well rewarded.

Age has no barriers in the Hoops. Nor has death; An example to the deceased and resurrected everywhere that it’s still possible to be a top player. Eddie lit up Thursday with some exciting directness and flowing interaction; no fluke, it seems as he got in synch early. Air of expectation around him when he bursts forward. Might have scored but delivered the exact cross at the exact time to kill off the game.

Appeared. Appreared what? you may ask. Well, actually appeared. In the game. Still floating but with a bit more bite. However…For a man of his class we need him on the ball when HE wants it, not when we choose to play him in; I want him DEMANDING the ball, doing what he does best and creating the chaos that opened the scoring. But earlier. And MORE often.

No look of disinterest today – wore an expression like his cat had just started talking to him as a new phenomenon materialised: Support. Service. Delivery. Nearly slashed one in as he set his sights, agonisingly close with two point-blank headers. Joyeux Noel, Eddy – here’s a pass. Have a cross. Winding up to the inevitable… Then he got subbed…?

What’s tougher – selling crack in the warzones of 90s Detroit or facing Killie on a winter’s day in Glasgow? Well, we know what’s wetter. Drexl’s pure relentless yardie gangsta when the whistle goes – a man for a cause who’ll never fault for effort. It was a relief to see him get in on the shoot-out for the last fifteen given his alarmingly early exit Thursday.

Twelve days to his birthday and he’s saving up the big present for next Sunday. Floated on, floated around, looked dangerous.

ROGIC – N/A – ‘It’s summer in Oz’, he growled as he was forced out of his thermals and into the win bonus.

MIKEY J – 6/10 – “After completing filming for his forthcoming starring part in the Dune movie, Timothee Chalamet reprised his role as a New Romantic throwback, be-hooped soccer star with a cameo at Paradise today that showed cultured tenacity and promising fleet of foot” Variety Magazine

Would he, wouldn’t he? Drop Broon. Yes. Friends is no longer his favourite TV Show. Now it Game Of Thrones machinations as the pressure hits max and the boss walks the razor’s edge. Expectations were fulfilled to the max as well today, all petted lips put away and even teeth were spared a grinding as the inclusion of Alan Ladd proved match-winning and not damaging to plasterboard walls and foreheads across Thimland. Next week he gets to crown his triumphant salvaging of the 8 and 9 with a Quadro-Treble capture. He’ll deserve that. Haters gonna hate.

We’re on the road again amid unfocussed internecene squabbles and banners calling for the Beatles to ‘disband’. Sorry, not the fab four, the PLC; An experimental synth combo known as the Peter Lawwell Collective. Anyway, the Bhoys of the North Curve don’t like their latest album, or something so they want him to go solo.

And anyone called Tory has to leave as well. And those in charge need to sack themselves.

It was good to see 27 year old bedsheets get an airing, but thankfully less confusing than random rhetorical scatter-fire was the display inside Paradise. 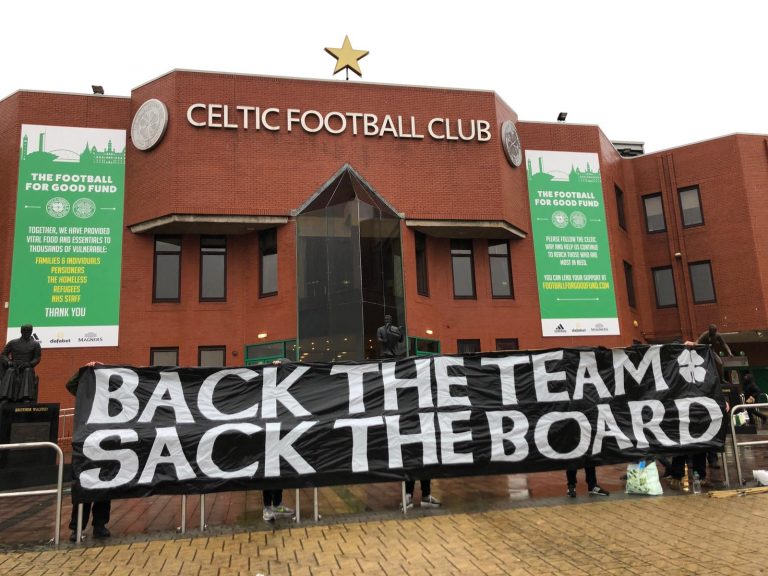 After a bit of jousting first-half it was time for belief to rise and swamp a resolute Killie mob. We found some dynamism and verve, absent from Scottish Premiership performances in the main. The kind of wave of energy that buckles opponents. Eventually the Bhoys got their just desserts and we notched up a win that historically may look run-of-the-mill but in this moment brings renewed momentum and conviction to a squad hopefully jolted out of their reverie.

So we move on with hope lifting up spirits and heads and wonder if that’s a new moon rising, or a Death Star.

Celtic lifted some pressure off Neil Lennon with a 2-0 Scottish Premiership win over Kilmarnock but fans kept the heat on the club's board. pic.twitter.com/pfFzbQJNNG

Previous ArticleA Much Happier Day for the Hoops but where was Ewan Henderson?
Next Article Never Say Never – Why Scottish Premiership can still be won by a mentally stronger Celtic