‘Recycling plastic feels fantastic! Until you have to play on it.” Greenpeace.

Weather was the real Hazard but his anticipation and handling seemed attuned to any freak storm. 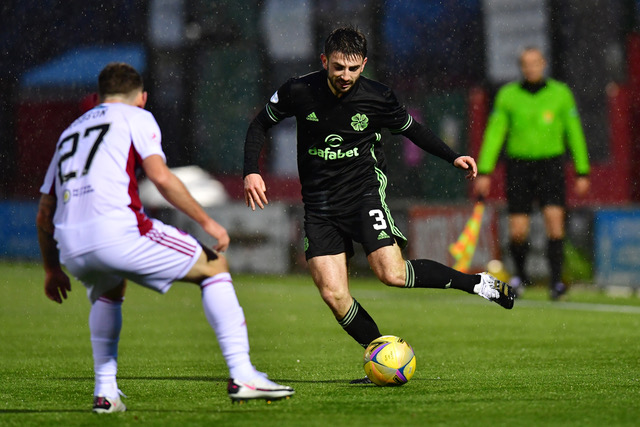 The controversial choice. Unhealthy for your breakfast but how do Celtic fare with him on a grim day? Well, he’s busy – no complaining about his commitment to support and defend – and gave a good wide option for midfield and forwards. Looked like he enjoyed himself playing in that. Weirdo. 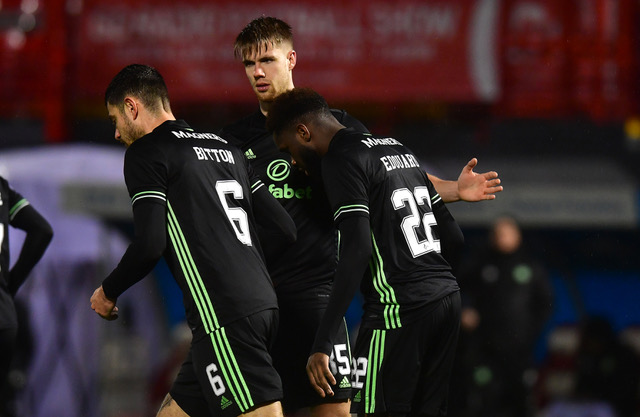 Casual ball woke us all up after ten minutes as he decided to tweak Hamilton’s optimism. After that, however, remained stoic and reliably tough. 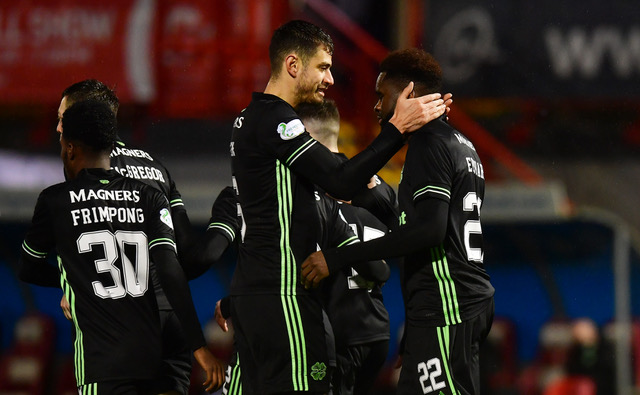 Threatening, at both ends – caught flat by Ajer’s poor ball and took a booking, popped up on the end of two corners first ten and might have scored. Settled into a comfortable game. 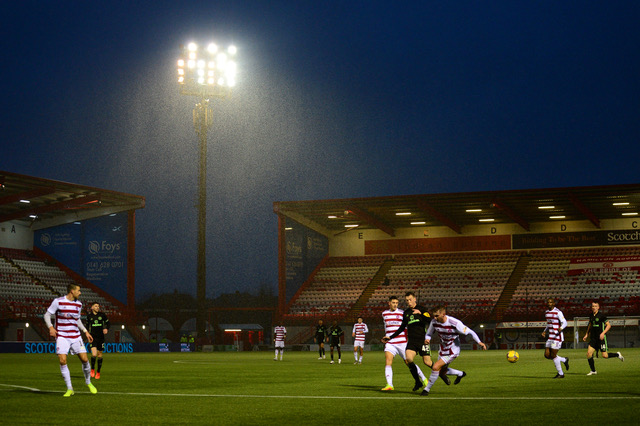 His potency was almost negated by that pitch as we’ve seen with Jamesy. But to his credit there was some dreary back-tracking done well, and determined forward-bursting up and down the weather front. Was a pleasant surprise not to see him fade and stay relevant through the 90. 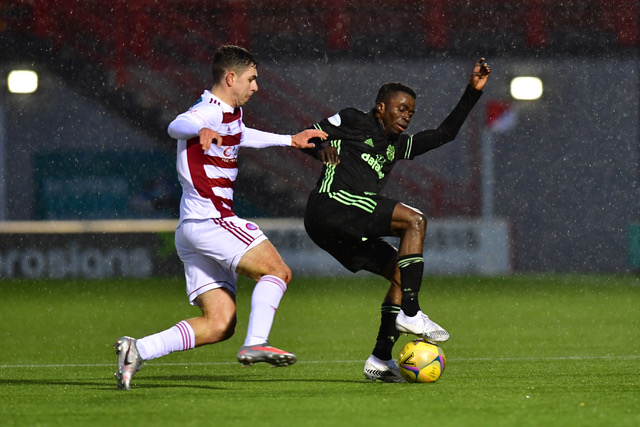 Wee mhan got intense as required in a clogged midfield as the home side’s robust young neds stuck to the game-plan and closed space, kicked and hustled. Didn’t faze him at all, more so focussed his effort and with
Calmac rarely more than ten yards form him, we took control of the game. 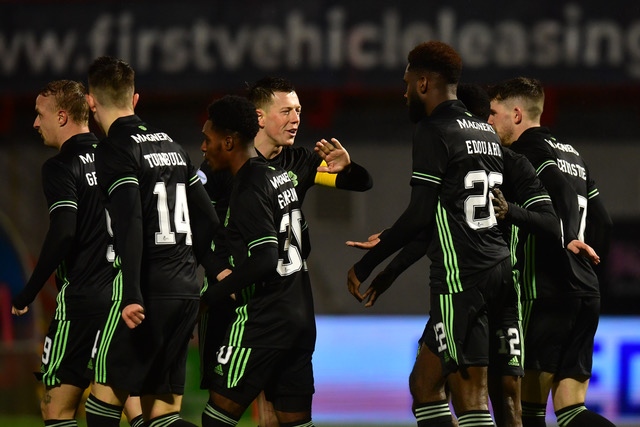 Ubiquity is his forte. Fine captain’s performance as he dictated most of our forward play and looked keen to get on the scoresheet himself with numerous forages into dangerous areas.

Not a lot of space to operate in but he found some channels to upset their shape. Maintained a staggering level of participation in such conditions given he’s nearly 100 years old and that experience provided dividends as he prodded in an Eddy rebound for a deserved goal.

What did he get for his birthday yesterday? A ticket to Nice? A trip to England? Will the Son Of Man betray us in January like his best mate at Easter? Well, we got another suspicious performance as he floated around looking both deadly – some vicious dipping shots – and traitorous with half-hearted input in sticky situations. Hmm… 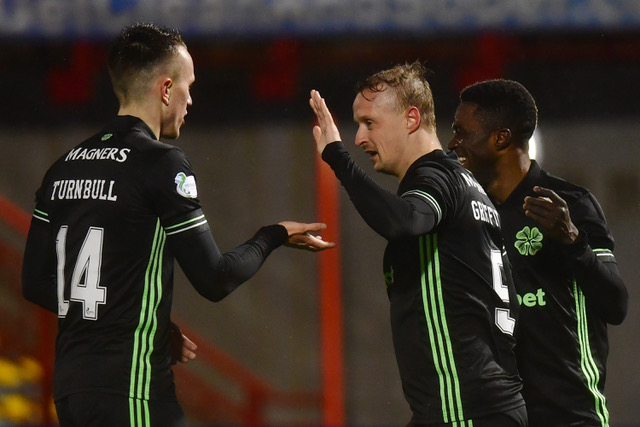 A save, a post, another save, and by twenty minutes Griff had more knock-backs than an average circuit round the Kool Kats dancefloor. But Griff knows fromm experience that if you persist with earnest desire, asking, ‘Gonnae gie’s it?’, ‘Gonnae gie’s it?’ at every opportunity then at some point the universe is going to serve one
up on a platter; this time it was lay-off of the season from Eddy and Griff got another notch on his bedpost. 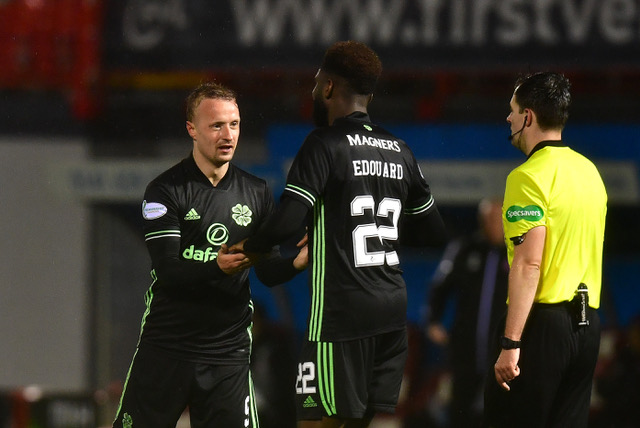 Hamilton’s manager Brian Glover was honoured by Eddy in the 34th minute when he re-enacted his famous scene from ‘Kes’, beating all of their team and supporter’s club, before smashing it narrowly over the top.

Aside, involvement was his mantra, as so many bleat, and but for good goalkeeping and bad luck he’d have had a hat-rick by the break. Quality shone through the filth after half-time and Le Predator won the game with scintillating style and even found the seasonal goodwill to spare boaking rat Neil McCann another fluster by
not Panenka-ing the spot-kick. Keep him fresh for Mordor, he’s approaching unplayable levels on this display.

WELL DONE #CelticFC💚!
THE MOST BEAUTIFUL GIFT🎁 YOU COULD GAVE US FOR CHRISTMAS!🎄🌟
Three goals⚽! Three points✅! Great to watch.
Congratulations for the extraordinary character displayed throughout the match! 👊🍀 #HAMCEL pic.twitter.com/DtwATr3Tko

AJETI – N/A – Was hoping for snow, but rollocked about in a bellicose manner in weather he described as ‘scorching’.

ELSHAGYONLASSIE – N/A -Itroduced as punishment for fannying around too much.

🎙️ Neil Lennon: “I’ve got two good strikers. The link-up for the second goal was great. Everyone today looked more like themselves. They got what they deserved. It was a great performance and a great win.”

On the Match with the Neil coming up 📺#HAMCEL

The sort of day and stupid pitch, when lesser-willed managers may have played percentages and sought safety-first formations, so kudos for sticking to his dynamic double-act up front who did give us the edge to win on a sticky wicket. Or sticky-back plastic.

🎙️ Neil Lennon on @Oedouard22: “I trust him with the penalties. He’s scored goals in cup finals, big games and he looked far more like himself today. Some of his play was magnificent and he’s a joy to watch.”#HAMCEL 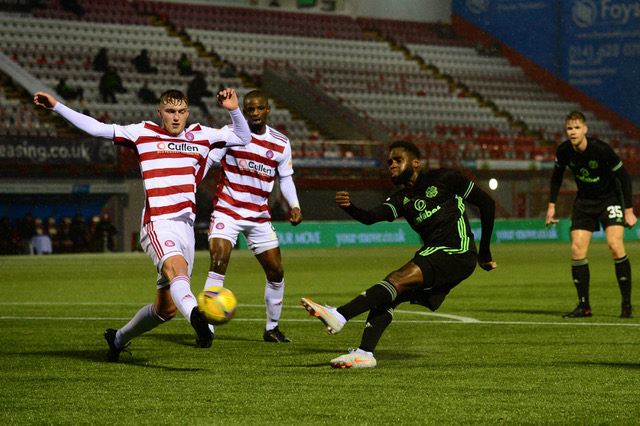 Phew. Well, we put in a first 25 minutes to win any game, pinned them in, created a number of chances. At half-time it was a case of cross fingers and hope the Bhoys would not lose the will or verve, or belief – as had been too evident last Sunday. They didn’t, and the traditionally tricky prospect of Hamilton away was eventually negotiated, with a little flourish of style too. And on we go towards New Year destiny via Arab Wednesday.