You are at:Home»Latest»ScotGov on decisive action – Celtic, Aberdeen punished, theRangers praised. Who else was at the party?

Celtic fans and presumably those involved with running our club will be astonished this evening at the statement issued by a Scottish Government official today in response to the news that two Rangers players had been issued with Fixed Penalty Notices from Police Scotland after breaching the coronavirus protocols.

Nicola Sturgeon had previously warned Scottish football that they were on a final warning as she issued a yellow card after the Aberdeen players went out drinking and Boli Bolingoli set off on his illicit overnight trip to Spain. There was no suggestion that either Aberdeen or Celtic were aware of the actions of the individuals involved at the time but both clubs were punished by the Scottish Government.

So it was only reasonable to assume that a similar fate awaited the Ibrox club today after the news that their player breached the protocols last night by attending a house party and were subsequently issued with Fixed Penalty notices by Police Scotland.

Reacting to the statement from the Scottish Government someone very close to the action at one of the clubs involved (no prizes) told The Celtic Star earlier this evening: “What about them getting praised by Scottish Government, an absolute shambles this country.”

And there are further questions that need answered – like were there other Rangers players at the party last night as social media speculation seems to be suggesting.

Jordan Jones and George Edmundson was at Arfields birthday party, so why is Arfield not suspended. Or did Arfield not go to his own Party 🤣🤣🤣and what I hear Kent and Barisic and at least 1 other Newco player was at party

The Scottish Government statement is astonishing to say the least. It cannot be one rule for all the other clubs and a different one for a club operating out of Ibrox.

“The return to training and match protocols mandate strict adherence to all government guidance in place, including on gatherings and physical distancing.

“Players maintain the sporting bubble by not compromising any of these things when away from the heavy regulated training or match environment, and we expect clubs and their staff and players to fulfil their responsibilities and apply all of these measures rigorously.

“We commend Rangers for taking such swift and decisive action in this instance, to protect the rest of their squad and wider public.”

Did Celtic and Aberdeen not both take “swift and decisive action” and if they did why were they punished and not praised by the Scottish Government?

📝 The Scottish Government are commending Rangers on their ‘swift and decisive’ action after suspending Jordan Jones and George Edmundson.

“We commend Rangers for taking such swift and decisive action in this instance, to protect the rest of their squad and the wider public”. pic.twitter.com/nTJekDDGnk

Police Scotland confirmed that TEN people had been issued with Fixed Penalty notices at the party but who else was there before the cops arrived?

“Around 1.25am on Monday, 2 November, we received a report of a house party in Devonshire Terrace in Glasgow. Officers attended and ten people were issued with Fixed Penalty Notices. Advice was given and the party was dispersed,” a Police Scotland statement revealed.

Celtic and Aberdeen both acted quickly when they were made aware of what had happened. Double standards by @scotgov but not surprising.

Much as I detest the Sc Gov commending that shower of charlatans, Bolingoli’s (not Celtic’s) offence was worse by playing a game when he should have been isolating.

Wonder will @VanguardBears be looking points deducted from Sevco on this occasion?😂 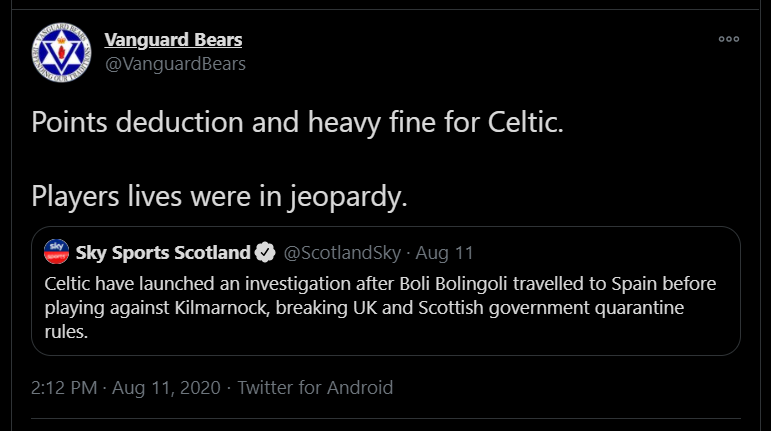 9 players did not have testing all clear July 24, 2020 pic.twitter.com/mEkLURK73F

If it’s true that the two players were nowhere near staff or squad then there is no case for Rangers to have any game suspended.

However, the club must be fined in line with Celtic and Aberdeen. Clubs are responsible for the behaviour of their players whether complicit or not.

Previous ArticleWhy embracing Celtic’s Catholic Roots is not something that should be contentious
Next Article Green Brigade Online Food Drive – “In some cases, the Celtic support have literally kept the doors of these food banks open”