You are at:Home»Latest»Scott Brown held back as Hearts players fume at Celtic win

Scott Brown had to be held back by Jack Nayler after Kris Ajer’s penalty sealed a shoot-out win versus Hearts. In what was a topsy-turvy clash, Celtic seemed to be on easy street to a Quadruple Treble but in keeping with this season’s inconsistency, Hearts roared back after the break.

The game ended 2-2 after the 90 minutes but Brown thought he had played a part in winning it when his header was turned net bound by Leigh Griffiths. This was to be short lived as the Jambos again as some woeful defending allowed Neilson’s side to come back into it.

The game was destined for penalties as chances were spurned. It looked as if Hearts were going to win it when Christie’s champagne penalty was saved by Craig Gordon. Kingsley and Wighton were denied by Conor Hazard which gave Kris Ajer the chance to seal the Quadruple Treble.

The Norwegian defender did just that prompting scenes of jubilations from the Celtic squad. Their Tynecastle counterparts were overcome by the defeat and some were reduced to tears.

The passion Ajer has is unmatched, not to mention broony squaring up to all the hearts lot 😂pic.twitter.com/UgPgGB5ZKa

However, some Hearts players (and staff) appeared to begrudge Scott Brown lifting the trophy and the 35-year-old had to be held back as he was confronted while the rest of his teammates celebrated. Head of Sport Science Nayler was on the scene to keep Brown away from any altercations with the two-in-a-row runners up.

Oh dear what can the matter be🥲 pic.twitter.com/q69Nc2el8K

Andy Halliday and Steven Naismith were constantly trying to get at Brown, with the latter stamping on the Celtic captain in the first half. Although it was the club stalwart, who signed from Hibs in 2007, that had the last laugh as he lifted the twelfth successive trophy for Celtic – completing a Quadruple Treble. 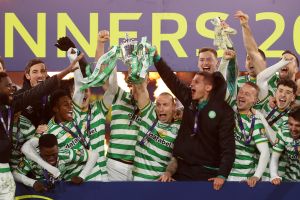