You are at:Home»Latest»Scottish Cup Final will give Celtic the perfect opportunity to scout star duo

Celtic may not have been playing in The Scottish Cup Semi-Final today but the club were working away, watching Ali McCann play for St Johnstone. According to The Sunday Post, the Parkhead outfit were watching the young Irishman as his Saints side kept their double dreams alive with a 2-1 win over St Mirren.

The Final in a matter of weeks will also allow the club to scout Josh Doig, the young left back. As our Niall J wrote a matter of days ago, Doig could solve Celtic’s fullback woes and would represent a bargain if a deal can be sealed. The 18-year-old has impressed in his breakthrough season with Hibs and with Greg Taylor, Diego Laxalt and Boli Bolingoli struggling to make the spot their own, he may fancy the opportunity to become a Celtic player. 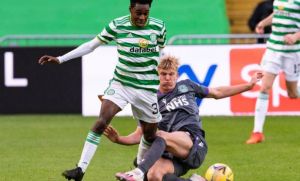 Celtic have been linked with the energetic midfielder in recent weeks as they plan a rebuild in the summer. A new manager is likely to be in place ahead of the new season but a new central midfielder to replace Scott Brown. Tosh McKinlay has watched McCann as Celtic ponder a move and his performances for the League Cup winners and Scottish Cup Finalists will only help his chances of landing a dream move to Celtic. McCann could certainly provide an enormous amount of fight and drive to a Celtic midfield that has struggled this season.

Both players will see the shining example of David Turnbull as proof that they can become a regular first team player shortly after moving from another SPFL Premiership club. McCann and Doig are emerging talents in the league and Celtic should watch them closely before deciding whether or not to bring them to the club ahead of the new season.