You are at:Home»Latest»‘Scottish league stitched us up’ Bitter Bear complains to UEFA Europa League

UEFA EUROPA LEAGUE have this morning tweeted their birthday wishes to former competition winner Arshavin and have included a video of the former Zenit player piling on the agony and turning on the style in the 2008 UEAF Cup final in Manchester.

Celtic Supporters everywhere will enjoy watching this one…and the comments that follow.

The first one is a classic. “Scottish league stitched us up by the amount of games we had to play beforehand but Manchester was amazing,” Robert Livingstone wrote.

But Robert was of course correct, Manchester was ‘amazing’ that night in May 2008.

Amazing scenes as his fellow Rangers supporters wrecked the city, attacked Police and got their very own episode on Crimewatch. Compare and contrast with the joyous scenes in Seville in 2003 or even in Glasgow on Saturday evening after the Treble Treble was won, although the Evening Times yesterday attacked The Celtic Supporters for leaving rubbish uncollected – see HERE.

Oh and your old club asked for a game against Gretna to be postponed during the season to help with your European run and the League campaign was extended for Rangers – unlike in 2003 when Celtic played in the UEFA Cup Final. 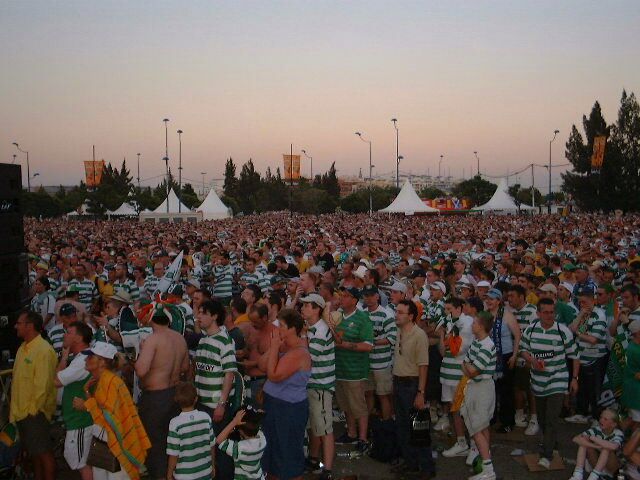 The league was won by Celtic on the Thursday night after the league was meant to finish the previous weekend when a Jan Vennegoor of Hesselink gave Celtic a 1-0 win to wrap up the title.

Here’s what happened at Tannadice on that Thursday night when Celtic won the league in the extended season of  2007-08.