You are at:Home»Latest»Seville, The Celtic Movement – A Photo Special from the 2003 UEFA Cup Final
Showing 1 of 3
Next

Fans of The Beatles may remember when their ‘Anthology’ was shown on TV in the mid 90s. One instalment dealt with the legendary Shea Stadium gig. I recall being quite impressed with the editing of one trailer, in which all surviving members of the group name checked the venue in quick succession with faces still betraying a sense of awe at the gravity of an event held thirty or so years prior.

I think that’s the way it’s going to be with Seville.

My Seville story really started while I watched the Boavista away leg with my wife at home. This had become a superstitious arrangement through progressive away ties in the competition. I’d come to feel that we wouldn’t win if the dynamic consisted of anything more than her and I. Irrational yes, but hardly unusual for someone who dribbles a mini football around the house during live radio commentaries somehow believing that I’m contributing to the match in progress. 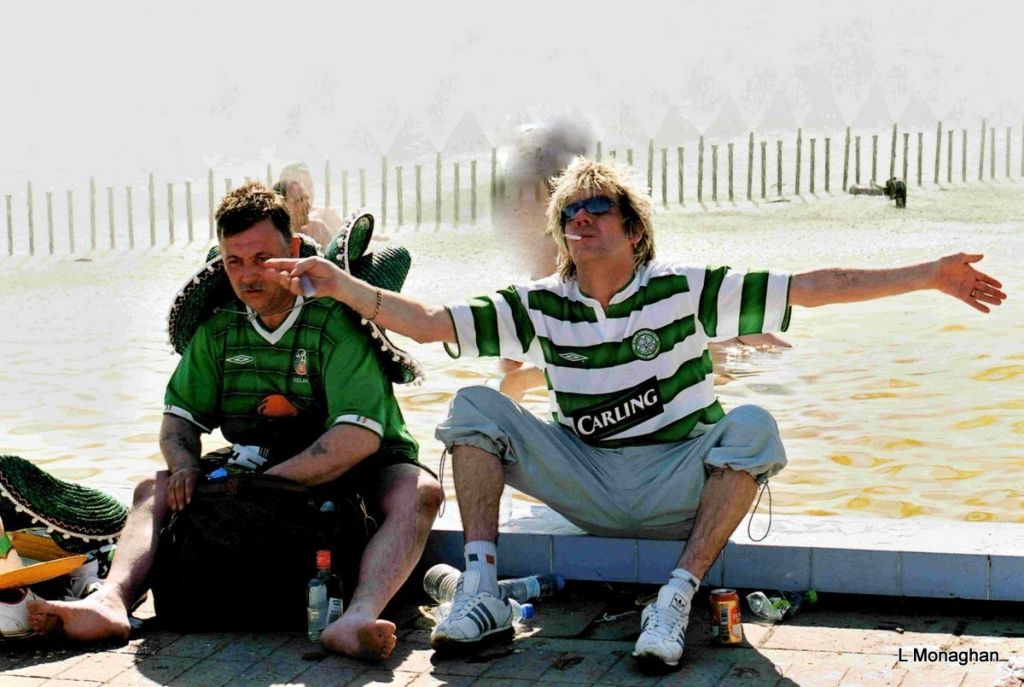 Of course we’d loved Blackburn, Stuttgart, Liverpool etc, but with twenty minutes to go in Oporto, I sat with my stomach recreating a range of football related sinking feelings from the past. You know, being told I was ‘rubbish’ by the high school team prima donna as another of his cannonball passes rocketed out for a shy under my foot, or the time I ran home from primary school to watch Celtic lose to…someone…on a black and white television during the seventies. I’ve never wanted to find out who we lost to or what year it was. The memory is more intriguing left blurry like footage of the moon landings.

Back in 2003, I’m out of the seat, whole body wound in tension. I’ve only breathed in. I’m gonna have to breathe out eventually. The ball, the ball…it’s hit off Hartson, no he passed it…wha’?…. HENRIK, PLEASE, PLEASE!

I never stopped to think about dad’s instructions. Toughen up? Stop greetin’? When you love Celtic you’ve got no chance. BANG, my head went off like a beetroot grenade. I got those wee stars and psychedelic patterns in my eyes as I let out a throaty skrike again and again. Still, hold it, calm it, easy baw etc. We’re no’ out the woods yet. The spell at the end was sheer hell. I celebrated Bobo’s clearances louder than I do goals at most SPL home games. 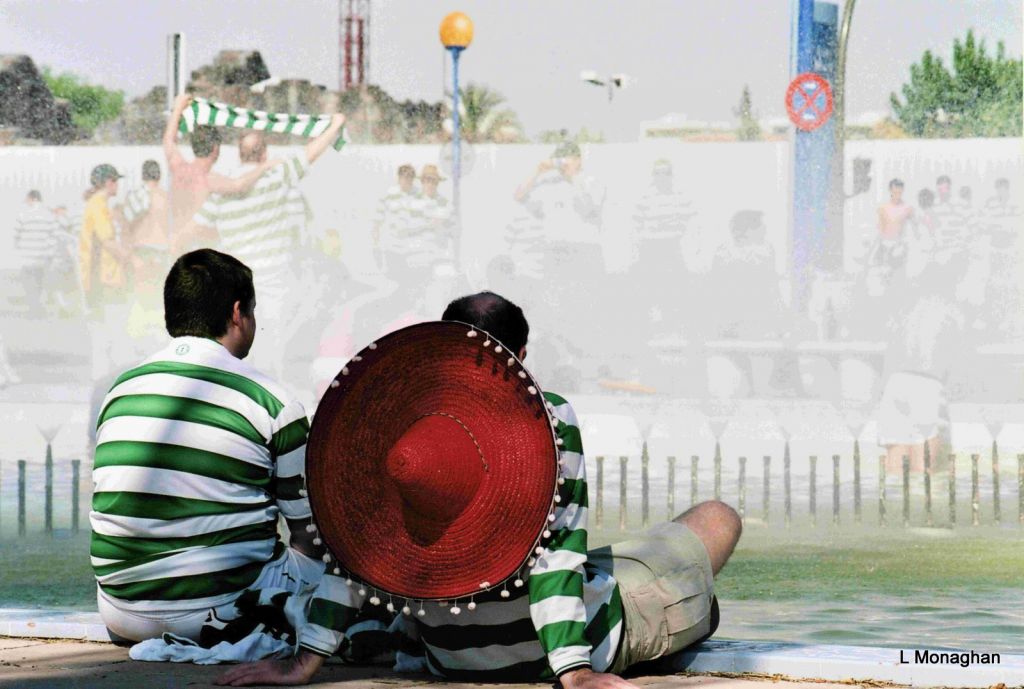 A Red Sombrero in amongst the Hoops

The final whistle blew. I’d look at a tape of events later I thought. I always love scrutinising the scenes and interviews at the end of Cup Finals but now is just for us to enjoy I kept repeating to a still seated other half ‘We’ve done it, We’ve done it’. Now, most of the time I speak (a lot) without thinking about it but I really felt the ‘we’. Not just in our living room but in Oporto, crofts on Barra, downtown Boston and all the Celtic bars I’d ever drank in.

I threatened the mood a wee bit by getting herself in an affectionate headlock. Obviously, a gallon of adrenaline wasn’t jetting through her system as a stupid, tearful ape flew at her from the other side of the room. She forgave me though after much apologising. I mean, I had to keep on her good side – Seville wasn’t going to come cheap.

As I lay horizontal on the living room floor, necking the last can of celebration Stella from the fridge, I beamed as yet another bevvied ‘tic fan challenged the panel to deny we were brilliant on the post-match phone ins.

Two hours after the final whistle and I was still clenching my fist and spitting ‘Yessss’ every now and then like it was a twitch. How was I going to get there and how might I get a ticket? 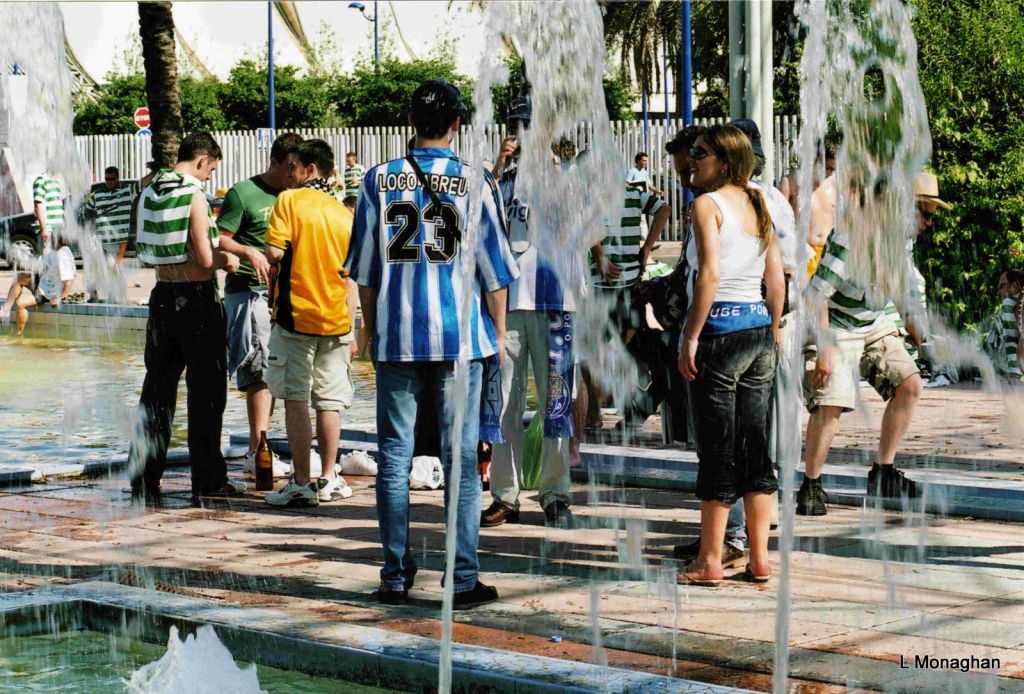 People all over the world were thinking the same thing. It was to be a big exciting, nervy, and periodically depressing game of musical tickets (and flights). During my quest to reach Seville I would see the best and worst of human traits (in context you understand) and also rediscover what I already knew – Celtic is not just a football club but an ideal concerned with fair play for everyone.

Flights were fairly easy. I queued outside a travel agent on Cathcart Road in Glasgow on a drizzly Monday morning before work along with a dozen or so other hyper hoopites. I was to end up on a French jumbo more used to taking Serge and Monique long haul trips to Tahiti than carting 500+ Celtic fans to Andalusia. It’s quite a sight to see that many people on a plane wearing the same top. Still, I don’t imagine anyone thought ‘damn, I must change’.

So far so good. I’d resigned myself to simply making a pilgrimage to Seville, ticket or no ticket. Over the next few weeks at work I tried to make connections via email to every long shot I could think of. Two lines of enquiry remain with me for different reasons.

Cesar is a Basque doctor who lodged with a mate of mine in Edinburgh. When I explained my dire need he asked his father to suss out the ticket scene across there. The old boy called his business contacts in Seville only to draw a blank. Even though he looks like an able Bilboa centre back, Cesar’s not really a football fan. The fact that he tried to help was much appreciated though.

CONTINUED TO NEXT PAGE…