You are at:Home»Latest»Shane Duffy linked with West Brom move but could Celtic make a move?

YESTERDAY proved that Celtic needed defences recruits. Christopher Jullien was bullied by the Killie striker and the Scottish Champions will need to invest if they want to be able to compete across all fronts this season. One name that was mentioned in 2016 was Shane Duffy.

The Irishman opted instead for a move to Brighton and Hove Albion but is now set for talks with West Brom. Duffy played 21 times for Brighton last year and could be available for transfer with Dunk and Webster being their preferred pairing at the back. Express and Star is reporting that West Brom have been in touch with the Seagulls about the availability of Duffy.

The 28-year-old is a hardened pro and he would bring a degree of experience and leadership to the backline. Duffy has Premier League experience and would be an impressive signing for the club, allowing them the ability to play 3-5-2 when need be as well as rotating the backline.

Talk in free derry that Shane Duffy is coming?

Back in 2019, Duffy said in an Instagram Q&A that he was hopeful that he would one day play for Celtic. A move to Neil Lennon’s side would give him the chance to play for his boyhood club as well as the chance to win trophies, including the legendary ten-in-a-row. 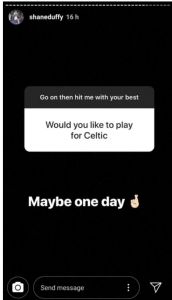 Celtic need a central defender and Brighton appear to be keen on selling him so an offer would be wise for a player that still has a lot of years ahead of him.