You are at:Home»Latest»Sinclair reflects on Celtic success after Paradise return

Scott Sinclair reflected fondly on his three and a half years in Glasgow after he was on the winning side of a friendly at Celtic Park. The 32-year-old was deployed in attack for Preston North End as new boss Ange Postecoglou named a youthful side for the final warm-up game ahead of the Midtjylland clash on Tuesday night; however, Sinclair was in a reflective mood as he returned to Paradise.

As reported by The Glasgow Times, Sinclair said that he would never forget the time that he had in Glasgow and all that he achieved with Celtic.

“I’ve achieved so much with the team, picking up all the silverware and winning awards individually and collectively as a team,” he said.

“I’ll never forget that time. There are just so many great memories.

“When you do have that kind of history with a club, there’s nothing better than coming back to it and I really enjoyed it.” 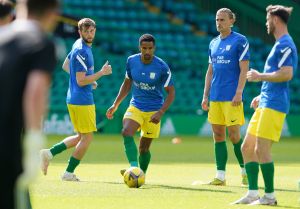 Sinclair was a key player in the Treble Treble team as one of Brendan Rodgers’ favourite players. From signing from Aston Villa, Sinclair scored on his debut and the next four games after that – becoming the first player in 94 years to score five goals in his first five games.

However, Rodgers’ departure and the arrival of Neil Lennon saw Sinclair’s game time dry up and he was clearly out of favour with Lennon. In 167 appearances, Sinclair scored 62 goals as well as winning 9 trophies in his time in Glasgow.

Meanwhile, Celtic fans will be hoping that Liel Abada can have the same impact as Sinclair did when he arrived at the club and help the club navigate the tricky Champions League qualifiers, starting with Tuesday night.

Hello, old friend. Remember that season when we were invincible? 🍀😀💚 https://t.co/4MT0yGQCVW