You are at:Home»Latest»Sky Sports commentator reveals his Celtic Park highlights

MARTIN TYLER has revealed his favourite moments from Celtic Park in an interview with Sky Sports. Whilst we would have been accustomed to Tyler commentating on the conclusion of the English Premier League this month, the Coronavirus pandemic means that we must settle for his pre-recorded phrases on FIFA20.

Speaking to Sky Sports, Tyler gave a detailed account of what it is like to commentate at Celtic Park and the difficulties that he encounters, whenever he is there.

“The main position is high, but very good. The noise levels of the crowd can be a problem during the game. Commentators wear headphones not only to hear the match director, the producer and the co-commentator but also to hear their own voices. That is vital. Just try putting your fingers in your ears and talk and you will see how difficult that is. So at Celtic, and Rangers too, with such passionate support you have to turn up those levels very high.” 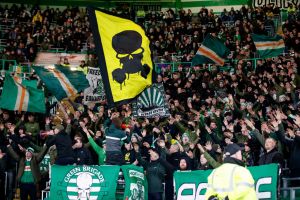 Tyler selected his favourite moment from commentating at Celtic Park as the 1-0 win at home to Manchester United in 2006.

“Matchday 5 of Group F of the Champions League in 2006 saw Celtic entertain Manchester United and it turned out to be a famous evening for the Glasgow club. United had beaten their Scottish rivals 3-2 at Old Trafford at the start of the competition, a match which provided two major portents for this return fixture with qualification for the knock out stages on the line for both teams.

“In Manchester, Louis Saha had scored a penalty for United to goalkeeper Artur Boruc’s right-hand side and goalkeeper Edwin van der Sar had been left helpless by a goalscoring free-kick to his left over the defensive wall from Japan international Shunsuke Nakamura.

“Fast forward now from September to November and to the last 10 minutes at Celtic Park with the game still at 0-0. There was another Nakamura free-kick in a similar position but slightly further out and again executed to perfection. This time Van der Sar was wiser and got nearer to the ball but nowhere near enough. Celtic had played a containing game under Gordon Strachan, waiting for a moment like that.

“The second déjà vu came just after Saha had burst clear with a great chance to equalise but stumbled at the vital moment looking as though he expected to be flagged offside. Shaun Maloney was adjudged to have blocked a Cristiano Ronaldo free-kick with a raised arm and United, as at Old Trafford, were awarded a penalty. Saha chose the same side but the shot was higher this time, a better height for Boruc to reach which he did with great agility to parry Celtic to safety. 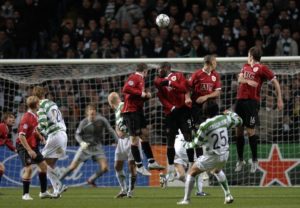 “The final whistle signalled not only a famous win for Celtic but the reaching of the knockout stages of the Champions League for the first time. United still needed a point but got three in their final game at home to Benfica, 3-1 with Saha on the scoresheet.

“It was an amazing night, a tale of two left-footers, one from Japan and one from France, which gave Scotland the bragging rights in this Battle of Britain.”

You can also read about Louis Saha’s gripes about his missed penalty here:

Tyler concluded by stating what he likes about Celtic Park, aside from the passionate support that make things difficult for him in the gantry.

“It is an enticing mix of size and intimacy. Green is not a dominant football colour, certainly among clubs. That makes the backdrop to matches at Celtic very distinctive.”