You are at:Home»Latest»‘If you SNOW your history’, Tom Campbell

TOM CAMPBELL, co-author of The Glory and The Dream and numerous other fine Celtic books including most recently Bobby Evans, Celtic’s Forgotten Hero, today joins The Celtic Star as a columnist.

Tom is in good company within the veterans among our team which includes Celtic supporters from all the generations from young, middle aged and slightly more mature.

Our Celtic veterans are the retired dentist Jim Craig, who kicked a ball himself once upon a time, fellow Celtic historian David Potter and now Tom Campbell. Three fine Celtic writers, one European Cup winners medal and each one many decades of experience supporting or playing for Celtic.

These three are the elder statesmen on The Celtic Star and it is our privilege to be able to pass on their knowledge and passion for all things Celtic, to fellow Celtic supporters of all ages who read this site.

We were discussing at the game yesterday that we have writers and podcasters across the generations, with the youngest being Declan McConville who recently celebrated his 18th birthday. Declan’s latest installment of his Invincible season diary covered the month of September 2016 and was posted last night.

Adding Tom Campbell is very special for The Celtic Star.

Brendan Rodgers talks of wanting to be ‘the best’ and that is exactly what we are trying to achieve on the site.

We have got off to a brilliant start with the size of audience we have achieved and the great feedback we have received and we’ve only just started.

There’s a new podcast up this evening which comes with a high entertainment factor and also a warning that the language can be a little naughty.

Meanwhile enjoy Tom Campbell on The Celtic Star. Here is his first column…

We’ve had snow in Scotland before, you know … and football used to be considered a winter sport. So, what’s the problem?

I was thinking of some games played in wintry conditions, especially ones that I can recall personally.

On 16 December 1950 the home fixture against East Fife was in considerable doubt but, thanks to the efforts of the ground-staff and volunteers, the pitch was in reasonable condition … although it looked different. A surface covering of about two inches of snow spread over the pitch and it was hard-packed down; the field markings were dug out and revealed the turf underneath. The game itself was memorable: Celtic played well on that treacherous surface to win by 6-2 with John McPhail and Bobby Collins each scoring three times.

The first goal, netted by McPhail, came right from the kick-off and without an East Fife player touching the ball. The Glasgow newspapers reported that the goal was scored in seven seconds, and that it probably was the fastest goal ever scored in Scottish football … but this seemed unlikely. In fact, a couple of days later the same Celtic players tried to duplicate the moves that led to the goal (and with no opposing players on the pitch) but the best time they achieved was about ten seconds.

Earlier in that same calendar year (1950) another Celtic match, a Scottish Cup-tie against Third Lanark at Cathkin Park, had been affected by snow.

The forecast had called for snow, and sure enough the showers started about ninety minutes before kick-off. Regardless, a large crowd turned up and the decision was made to allow them entrance through the turnstiles. I was there that day with my father and (although I was young at the time) we queued up at the Men’s Gate to pay 1/6d (7.5 p) for entry. Unwisely, we had ignored the shouts on the terracing advising us not to enter the ground; “Don’t come in … they can’t play … it’ll be called off … ”

We paid our money, and reached the top of the terracing behind the goal. It was a Siberian landscape, the pitch covered with snow several inches deep, nothing done to remove it, the snow now coming down thicker than ever, some 19,000 already in the ground, huddled on the open terracing and a bit bewildered, no sign of the players as 3 o’clock approached. Finally, an announcement over the tannoy: “The referee has called off today’s game; however, it will still be played as a friendly …” Consternation on the terracing, the teams came out, and the game started but within seconds it was clear that nobody could complete a pass, the ball sticking in the snow. 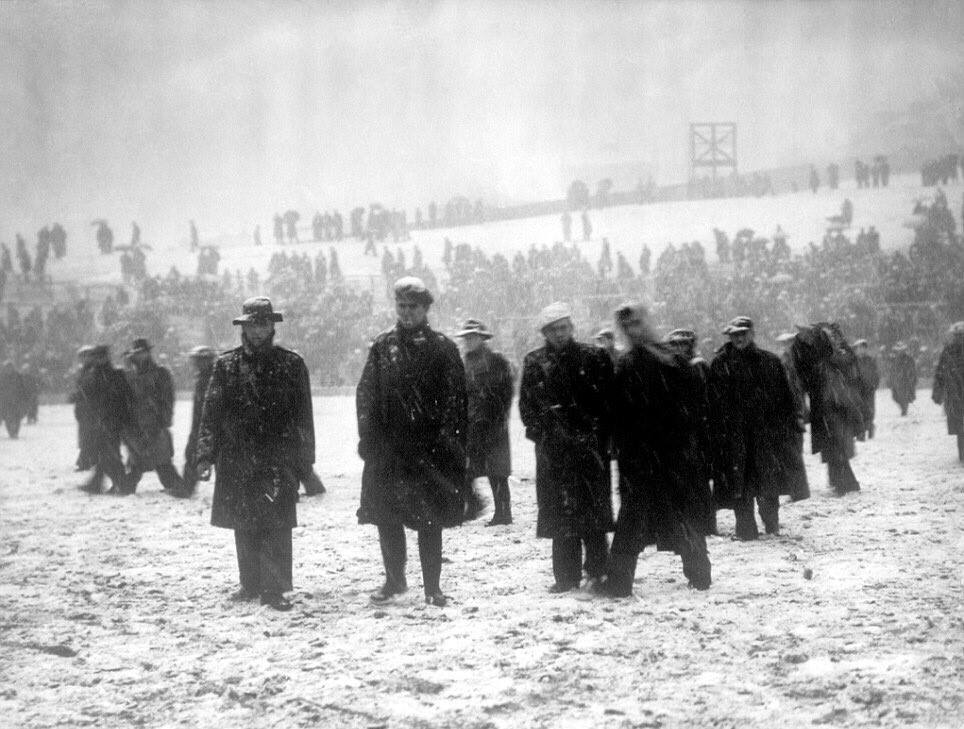 That was enough for some in the crowd, over the wall they came, not with any intention of harming any player or referee, they simply wanted this farce stopped, hundreds more joined in and the scene more and more resembled a rehearsal for a crowd scene from a film about the Bolshevik Revolution.

The players made their way, unharmed, to the old Cathkin pavilion at the end of the stand, hundreds remained on the pitch, in general cavorting; finally, they gathered in front of the pavilion, chanting, “We want our money back!” No response from within, and then somebody threw a snowball in the direction of the pavilion, others joined in and the playful mood changed, a window may have been broken, the police on duty, hopelessly outnumbered, tried to persuade the fans to stop but the mood was becoming uglier.

At last, the staccato of the tannoy and a voice, a pronounced Lanarkshire rasp, more than a hint of anger in it:

“This is Kelly, of Celtic.

“Anybody who wants their money can get it back at Celtic Park on Monday afternoon at two o’clock.

“Now, could you clear the field.”

Eventually, the crowd dispersed, still in a frustrated mood. Although assured they would get their money refunded, they had a perfect right to be aggrieved: they had laid down good money to enter the ground only to find that no attempt had been made to clear the pitch of snow, nor to mark fresh lines. The referee (and the clubs’ managers and directors) must have realised at least an hour before the scheduled kick-off that no competitive match could be staged but still spectators were allowed to enter the ground. Frankly, it came perilously close to fraud.

The situation became complicated after the aborted start to the ‘match’: the turnstiles, for one thing, were not reversible…it would have been impossible to find sufficient change to provide everybody with their 1/6d.

And what happened on the Monday?

Many Supporters’ Clubs phoned Celtic Park to suggest the money due their members be handed over to charity but, despite that, Celtic announced they had lost more than £1000 in the whole transaction. Some brazen punters claimed to have stood in line more than once to claim their hand-out.

The cup-tie was played later and to nobody’s great surprise ended in a 1-1 draw before a crowd estimated at over 30,000, thus ensuring a lucrative replay at Celtic Park (which was won 4-1 by Celtic). 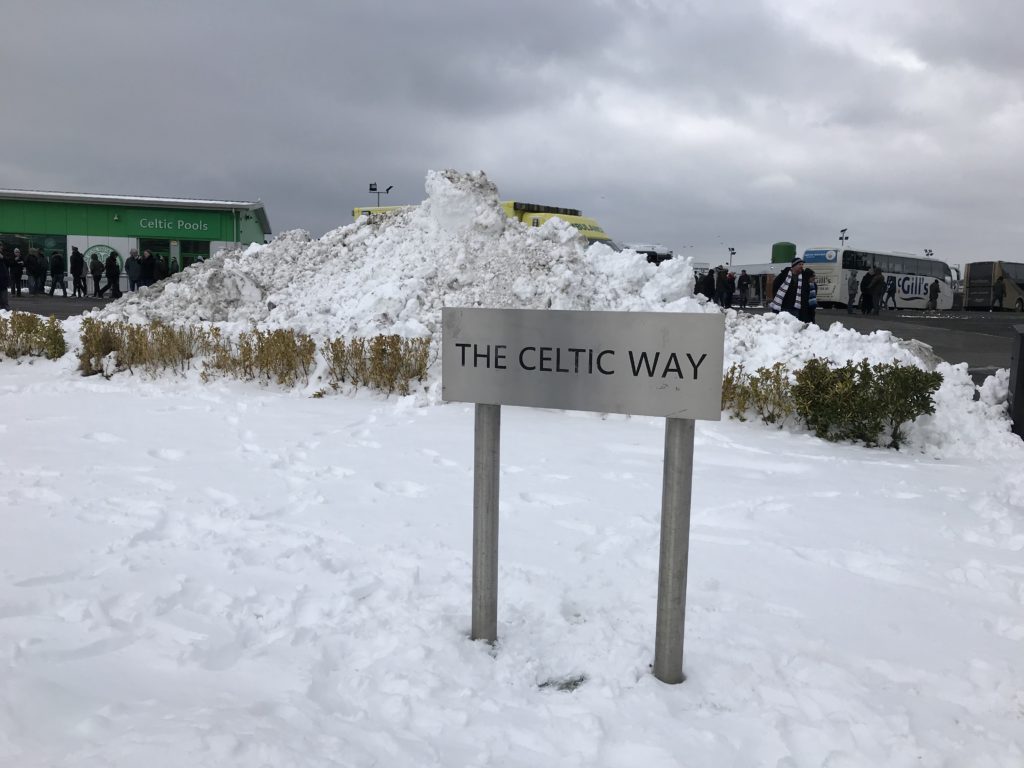 Astonishingly, this was not the first time such a scam had been inflicted on the fans of Celtic and Third Lanark … and, like the events of 1950, it was in a Scottish Cup tie, in fact, the final. Back in February 1889 Third Lanark had fought their way through to their first Scottish Cup final, and the fledgling Celtic, surprisingly were their opponents. The match, fated to be dubbed ‘the Snow Final’, was played at Hampden Park on 2 February 1889 before a crowd estimated at 18,000 (a record crowd for Scottish football).

Snow had fallen in the morning but the authorities decided around 11 a.m. that the ground was (and would be) playable. They were mistaken: the snow showers continued, and worsened and by the kick-off time the snow on the pitch was several inches deep … officials and captains of both teams conferred, and agreed the final could not be held under these conditions. They drew up a written agreement that they would both be playing under protest, and that the match would be considered ‘a friendly’. It was also agreed that the public, those that had paid good money at the turnstiles, should not be informed of this development although the fact that the Thirds and Celtic players threw snowballs at each other before the kick-off might have been a clue.

The ‘match’ was played; Third Lanark won by 3-0; nobody got their money back, of course. The SFA met two days later to discuss the situation, with some committee members feeling that the result should stand but, after the referee and his umpires were examined and stated the ground was ‘unplayable’, the decision was made to re-stage the final.

The ‘replay’ took place on the following Saturday ( 9 February) again before a mammoth crowd, and Third Lanark won by 2-1.

This was only one of the scams inflicted upon football supporters in the early days of Scottish football … and it came close to being repeated in 1950!

Tom Campbell for The Celtic Star

Next Sunday from Tom Campbell on The Celtic Star…Celtic? Poetry in Motion! 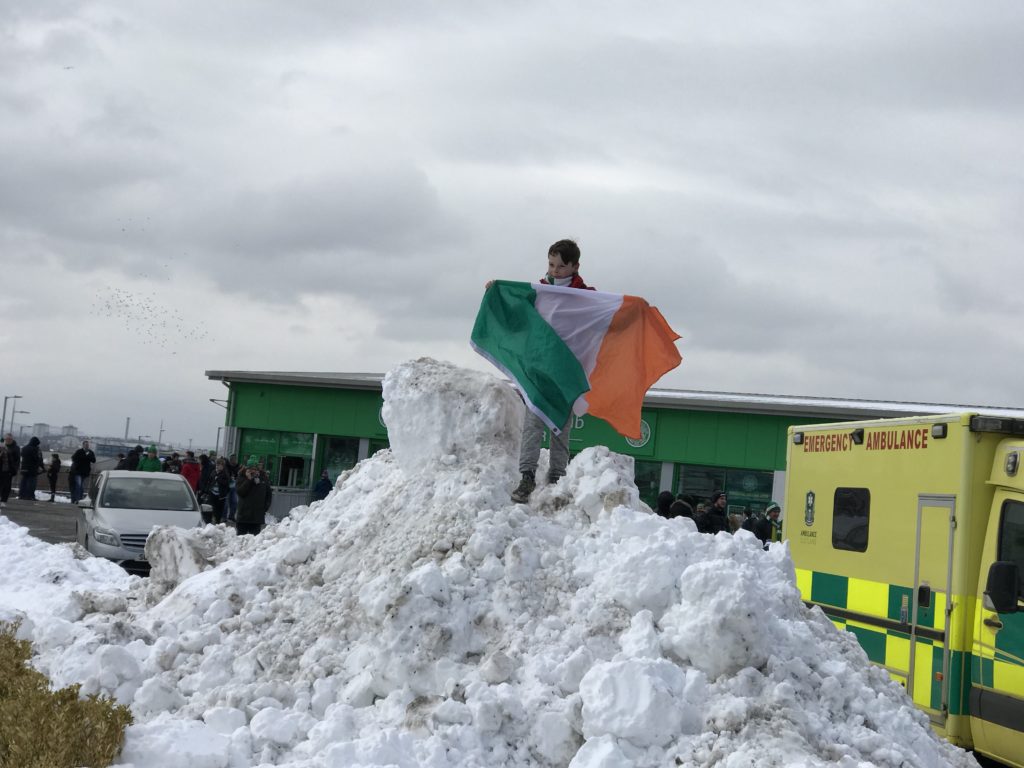 Previous ArticleCeltic to face Rangers in Scottish Cup semi-final
Next Article “You will all love Charly,” Martinez tells Celtic supporters