You are at:Home»Latest»Southampton ready to challenge Leicester for £20m Odsonne Edouard transfer

Premier League side Southampton are ready to battle with Leicester City for the signature of Celtic’s Odsonne Edouard, according to a report. The Scottish Sun claims that Ralph Hasenhuttl is keen on the French striker as he looks to improve ahead of the new season and Edouard is high on his list of priorities.

Edouard scored a brilliant goal last night after a perfectly weighted pass from Scott Brown allowed him to cut inside and chip the St Johnstone goalkeeper. Despite a quiet season by his previous standards, the attacker has scored 22 goals and assisted 6 in 38 games this season as Celtic relinquished the treble in season that fans will hope can be quickly forgotten. 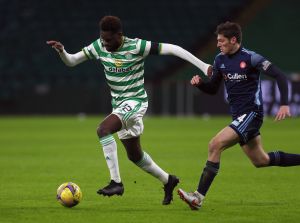 Brendan Rodgers’ Leicester City, who are two games away from sealing a Champions League place, are favourites to re-sign the player that Rodgers brought to Celtic in 2017. Edouard spent a season on loan from PSG before sealing a £9m switch. He was tipped to complete a transfer in the region of £35m last season but no deal transpired.

Southampton have offered a pathway to the Premier League for a number of Celtic players in recent years with Virgil Van Dijk, Stuart Armstrong, Fraser Forster and Victor Wanyama all swapping Glasgow for England’s South Coast.

Edouard’s value will have dipped with a year to go on his contract but the club will no doubt still demand £20m for their star striker, who is the top scorer in the league this year – despite Celtic’s abysmal season. With 16 goals in 12 games, Edouard has an incredible goalscoring record with France’s U21s, L’Espoirs.

A deal with Saints could also give rise to the possibility of Moi Elyounoussi being included as part of a transfer. Although with the prospect of Champions League action with Leicester, Edouard would likely fancy a reunion with Rodgers as opposed to playing with the Saints.