If you were expecting a match of free-flowing, inventive football then Celtic Park was not the place for you last night. This was a very competitive encounter mostly played in the middle of the park as the scarcity of corners and goalmouth incidents might suggest.

I am always worried about our team rising to the occasion but they did so last night. Every man put a shift in. I was particularly impressed with the way Callum McGregor not only did his defensive duties but whenever the opportunity arose, spread the ball around his forwards and followed it in. It was probably right that he should have got the all-crucial goal, a very spectacular effort demonstrating great skill and technique.

Considering the amount of money they have spent – and granted their lack of matches recently – Zenit St Petersburg were a disappointment. It was good that our side kept them in check but I was expecting more from a team that is 2nd in the Russian league. I would also doubt that manager Roberto Mancini would have been pleased with the display; he would have even more unhappy that his side failed to score a vital away goal.

So, the result sets Celtic up well for the return next week. Now, the team must put that match behind them and get ready for the visit of St Johnstone in less than 3 days. The Saints have not been setting the heather on fire recently but probably have more quality than their recent record demonstrates. It did not happen to Zenit but many teams are often inspired by a visit to Celtic Park. Our guys must be ready for the challenge from the Perth side this Sunday. 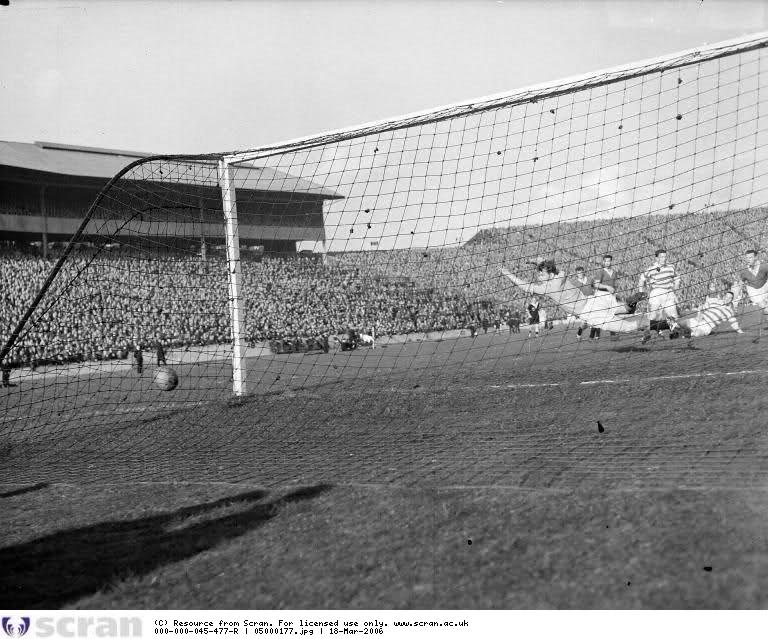 On this day in 1957, at Celtic Park, there occurred one of the most explosive and exciting Old Firm matches ever when the two teams met in a sixth round tie of the Scottish Cup.

50,000 were there for the occasion and they saw Rangers go into the lead in 7 minutes through inside-forward Morrison. Three minutes later, Billy McPhail equalized. Sammy Baird made it 2-1 to Rangers in 14 minutes; John Higgins drew Celtic level in the 15th minute and that was the score at half-time.

Bobby Collins scored for Celtic in 75 minutes, making it 3-2 and Willie Fernie made it 4-2 in 81 mins but the Light Blues came back through a Johnny Hubbard penalty in 83 minutes and a Max Murray effort in 85 minutes.

The fans were in raptures over the 4-4 draw and could not wait for the replay which took place at Ibrox four days later (see photograph above).  And this time a crowd of 88,000 saw Celtic win by two goals to nil, John Higgins and Neil Mochan doing the necessary.

Previous ArticleFive talking points on the Tommy Gemmell CSC bus home tonight
Next Article ‘They’ll have to come after us, which will suit us, it’s all to play for in the second leg,’ Rodgers