You are at:Home»Latest»St Mungo and his Cup – Aberdeen go two up but lose Hampden final 3-2 to Celtic

We all know, of course, that St Mungo is the patron saint of Glasgow. He lived about the 6th century AD and was sanctified for his good works and a few miracles which you may read about on Wikipedia, if you will.

Now we all know that in Glasgow talking about such things can bring one close to a beating-up if one says it to the wrong people in the wrong part of the city, particularly if they are in a bad mood because they haven’t won anything for a while. We on the other hand know well, having been told so by Brother Walfrid, Willie Maley and others, that “it is not a man’s creed or nationality that counts, it’s the man himself.”

It is pity however that the good Saint Mungo find himself associated with strange, humorous and even shameful events in 1951. Glasgow Corporation decided in summer 1951, as part of the Festival of Britain, to sponsor a pre-season tournament involving all the Scottish First Division clubs. It so happened there were 16 of them, so everything was easy, and there would be a trophy for the winners to be called the St Mungo Trophy.

Celtic, in 1951 on the crest of a wave having won the Scottish Cup in April and not long back from a triumphant tour of the USA, duly won the St Mungo Trophy, beating Hearts, Clyde, Raith Rovers and Aberdeen to do so. The final on 1 August 1951 was a real cracker with Celtic, inspired by Charlie Tully who, on his day, could look and play like Patsy Gallacher, came back from being 2-0 down to a good Aberdeen side, and although Celtic were playing with an injured goalkeeper, they won 3-2.

It was great stuff, – Evans, Tully and Peacock at their best – one of Celtic’s more dramatic Cup finals and it is a pity that it could not have been in a better and more prestigious tournament.

However it was another trophy for the club and it put quite a few noses out of joint, particularly those whose noses tended to be of the blue variety. The trophy was presented to Celtic at an Exhibition at the Kelvin Hall. 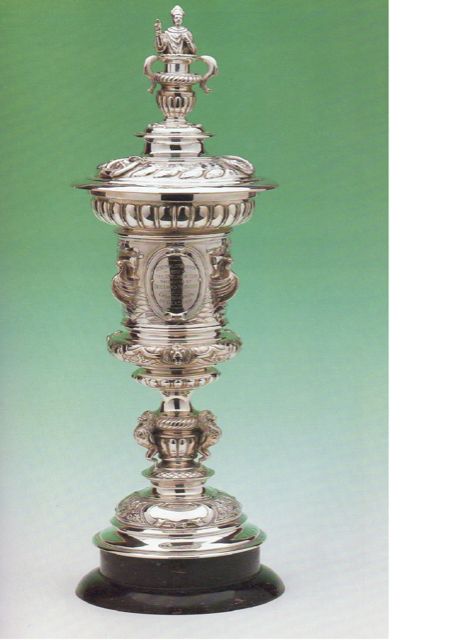 The St Mungo’s Cup is in the Parkhead Trophy Room…

From a distance, it was a fine looking piece of silver with the Glasgow coat of arms clearly seen and a few other motifs not usually found on football trophies – fish, mermaids, boats, life belts and other things of a marine nature. Strange! Not only that, but to his great embarrassment, when Manager Jimmy McGrory touched it, a bit fell off. Someone else tried to lift it, and the handle came away in his hand.

Those of us who are by nature clumsy (I think the proper word is dyspraxic) will nod sagely and sympathise, but it was more than sheer handlessness on the part of James Edward McGrory. The trophy was not really a great deal to be proud of. It had been purchased on the cheap after someone had found it in a cupboard where it had lain for a long time.

The naval motifs were because it was originally a trophy for yachting in 1894, but then Provan Gasworks had won it in a football match when they beat the Glasgow Police in about 1912. And now it was presented by the Glasgow Corporation for a major Scottish professional tournament! The Corporation clearly did not believe in throwing its money about!

Celtic offered to buy another trophy for them, but Glasgow Corporation reacted with horror and even righteous indignation at this suggestion, even though the national newspapers like The Glasgow Herald and The Scotsman seemed to find it all rather funny. Eventually Celtic (very carefully, one hopes) carried the Cup back home. Today it sits in the Trophy room (a rather crowded trophy room, these days!) where you can see it if you go on the Stadium Tour when they are back up and running again after the pandemic crisis eases.

You should be proud of it – it was after all a genuine trophy in 1951 in which Celtic beat all the other Scottish teams – but even if you ask the Guide very, very nicely, you won’t be allowed to touch it!

Kenny Mackin sent in this match ticket from the St Mungo’s Cup Final on 1 August1951, after reading David Potter’s article on the Hampden Final which Celtic won 3-2 after going 2-0 behind to a very good Aberdeen side. 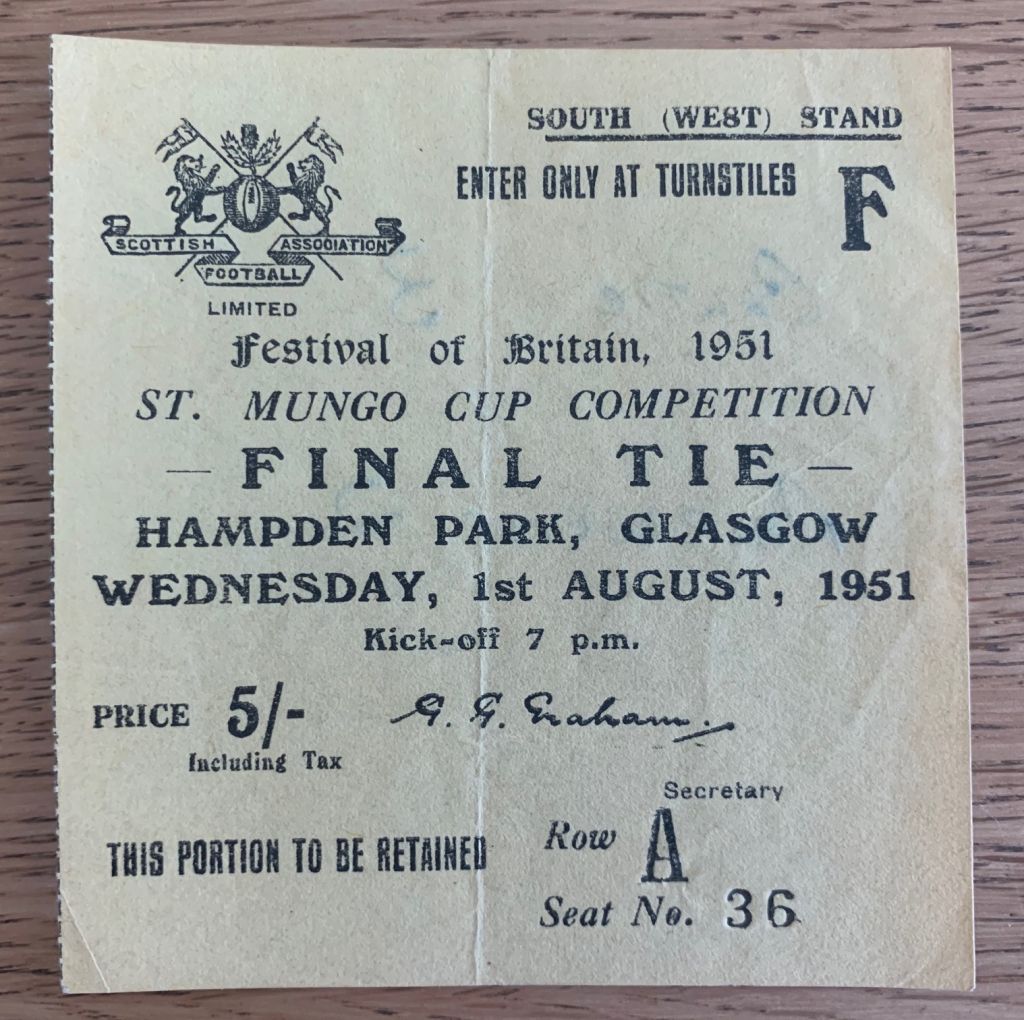 “A ticket from the game from my collection,” Kenny stated.  “Sadly being from section F of the south stand probably means it’s from the Aberdeen end but still a very rare survivor.” 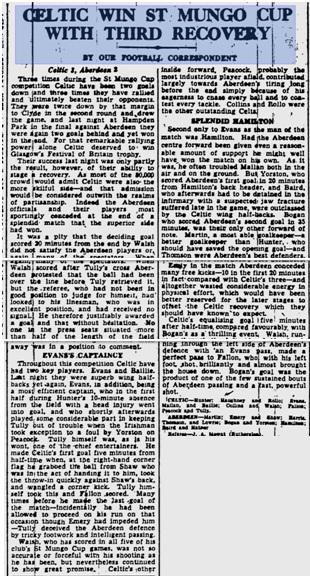 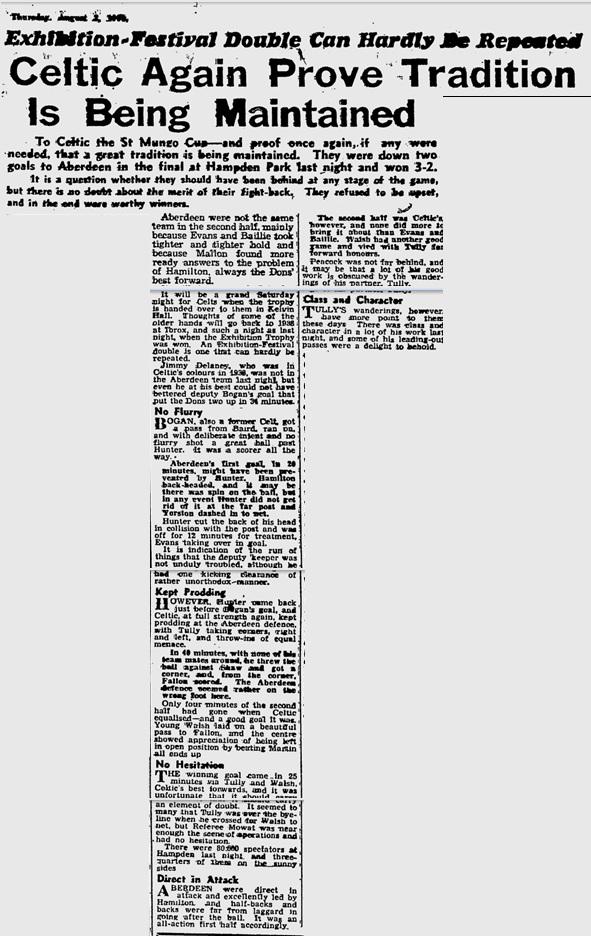