You are at:Home»Latest»Stopping Ten in a Row – Did Celtic have the mental strength to challenge Rangers?

1996-97 season brought Paolo to the heady mix of Pierre and Cadette and a move from the temporary stand into section 111 in the corner between the 2 towering stands. Optimism built again but always with the worry in the back of the mind. Added to this was the increasing fear and morose of my father about the prospect of ‘them’ equalling the fabled 9.

The season had its ups and downs but again our fragility of mind allowed too many dropped points at crucial times and despite getting close, Rangers eased to a 5 point margin and we didn’t have the mental strength to see off Falkrik at a rain soaked Ibrox in the Scottish Cup semi-final replay. Tommy Burns was done for and we all knew it but given the man and the footballer he was, along with the way he tried to play the game, and what many felt was the undermining from Fergus, no ill will was felt towards him. 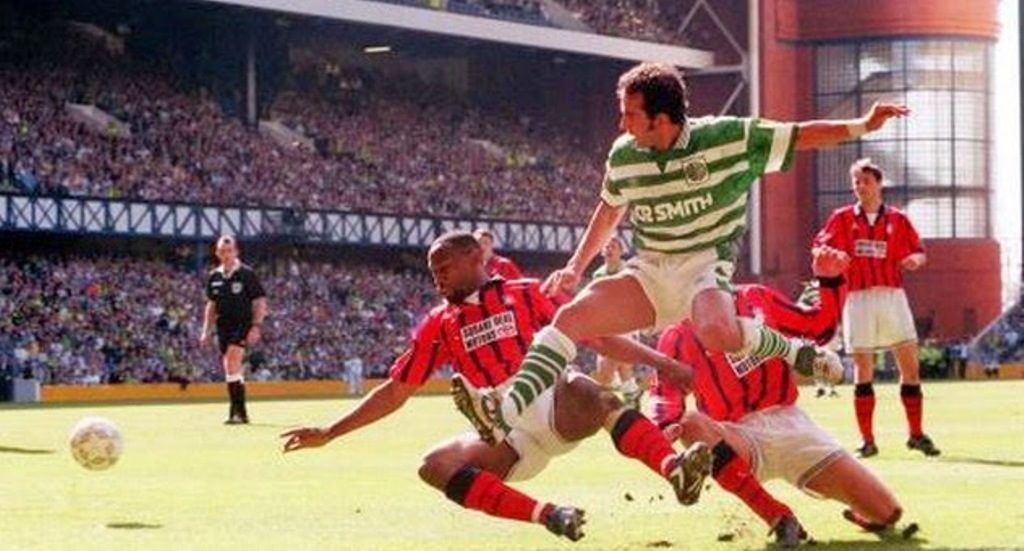 We headed to the Pavilion for Peter Grant’s testimonial show hoping to give TB a strong send off. His eulogy of PG and the acapella singing of Whitney Houston’s ‘I believe that children are our future’ brought the house down and he walked off the stage to his managerial fate an even bigger hero to that audience than ever before. 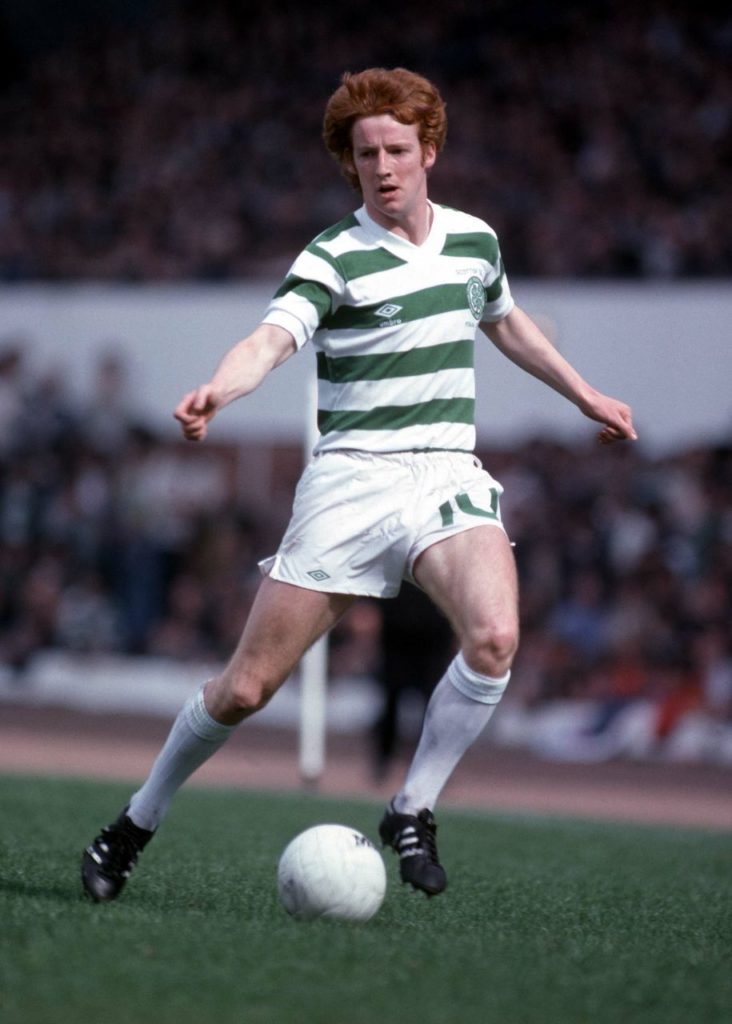 Now to season 1997-98 and the arrival of ‘The King’. In truth, there was little optimism in our household and by now my father was permanently grumpy. As the season wore on, there were times he was close to tears with the thought of 10.

The season started badly with 2 straight defeats and some concern that the new dreadlocked striker was not a patch on the 3-Amigos. A stuffy win in the league cup away to St Johnstone eased the early season woes and an 8 game winning run took us to the top of the league. That run was ended by a defeat in the derby and had us all thinking that we didn’t have the mental strength to pose a challenge. 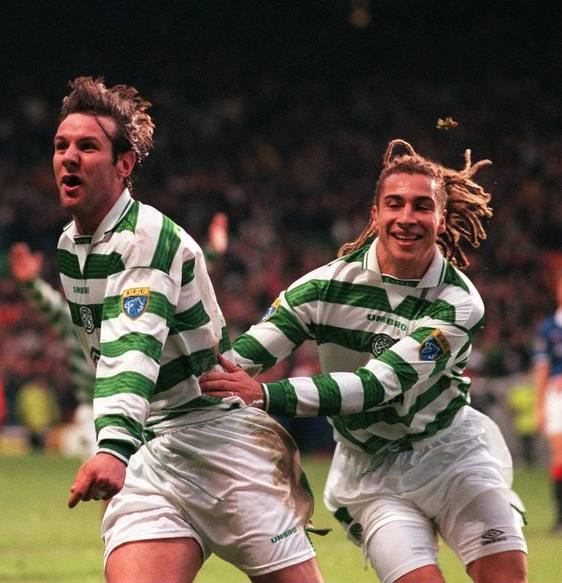 Despite that defeat in early November, two things happened in the October and November of 1997 that I believe turned the whole season around. By this time I had moved to England and could only make weekend games but I made sure that I was at Celtic Park for a Uefa cup tie against the mighty reds of Liverpool.

After being battered for 30 mins, I began to notice something in the team. They appeared to be learning as the game progressed. They were realising how to play and impose themselves on the game. As the game wore on, we were not only competing with Liverpool but dominating them and were deservedly 2-1 up heading into the final minutes when a certain Steve McManaman picked the ball up in his own half and meandered through our tired defence to snatch an equaliser.

We would eventually go out on away goals after a battling performance at Anfield but I felt that cold night in Paradise had taught us how to play football and installed a belief in the players. The big challenge would be could we do it against Rangers? In the first game the answer was no, but another was to follow two-weeks later.
I was holed up in a council flat in deepest Fenland England trying desperately to maintain any kind of signal for Radio Scotland as the team took the field on that November night against Rangers.

For most of the game it looked as though the old frailties had returned as they were leading 1-0 with 10 men. I couldn’t listen so switched the radio off, but like a fly to a flame, I was continually drawn to the action and would switch on, hear the score and switch back off again to pace around the sparse bedroom until I could no longer stand the anguish and switch back on again, repeating this many times during that stale second half. As the game moved into added time, I switched off again and cursed my team and the certainty of 10.

My one comfort was that I did not have to face my father and his anger and sadness. One final time the fly was drawn to the flame and I tentatively turned on again to get confirmation of the defeat at the exact second that the great big hulking Scouse centre half was leaping into the air to connect with the ball, sending it into the net.

The sounds emanating from that wonderful amphitheatre were awesome.

Steel and resolve was shown in the match to snatch that late draw when for the previous 9 years a Celtic team would have meekly accepted defeat.

Some encouraging results followed in the lead up to Christmas, including both the hard fought defeat of a table topping Hearts and the comprehensive defeat of Dundee Utd at Ibrox to win the League Cup. Demonstrating a strength of character and no little flair, could this team conceivably challenge for the title?

We were tentatively singing ‘…you think you are fine, you only got nine, you’ll never get 10 in a row’. 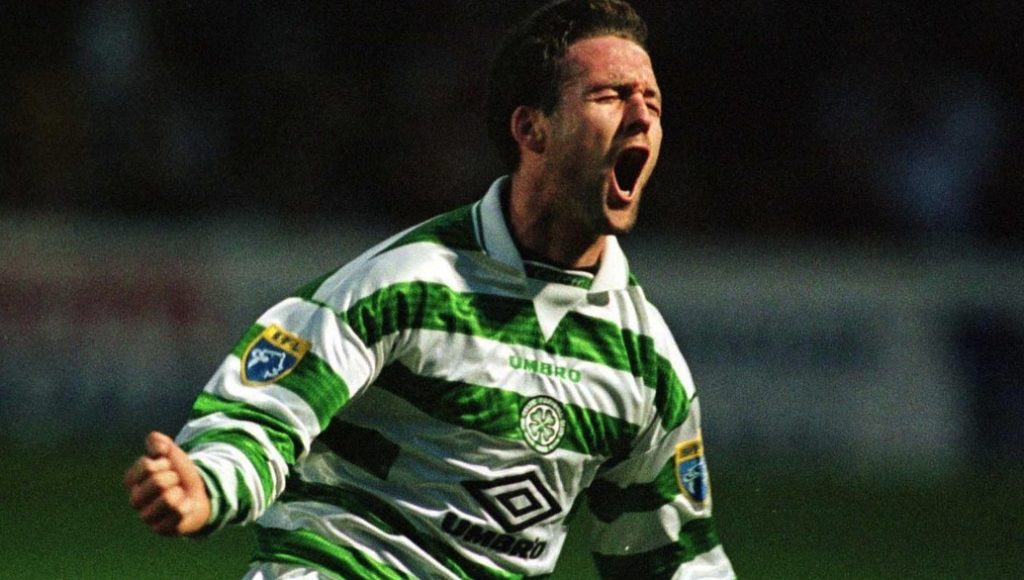 Despite these strong results, we approached the 2 January derby at Celtic Park four points behind our city rivals and defeat would surely end the title challenge and gift wrap the 10. That question was emphatically answered that glorious winter’s day as goals from Burley and a screamer from Lambert sealed a monumental win. Game on!

When watching the recording when we got home, Martin Tyler suggests, during the build up to Lambert’s goal, that a second would surely win it for Celtic, just as the ball flew from that cultured right boot. As the ball hit the net, Tyler shouts ‘And what a way to win it!’ He always did have a way of saying the right things at the right time. Along with Derek Rae, still the best commentator in the game.

The concluding part of Stopping Ten in a Row will be published later today on The Celtic Star.

Part one of this great three part feature can be read HERE.

Previous ArticleStopping Ten In A Row – Celtic, The Mess We Were In
Next Article Stopping Ten in a Row – ‘If your picture is blurred, do not adjust your sets, this ground is actually shaking’