You are at:Home»Latest»Stunning – Celtic’s away shirt for next season revealed

Celtic’s new away shirt for the 2022/23 season has been leaked and it is stunning. Footy Headlines have released the leaked images of the shirt and it has the hallmarks of a classic from Adidas. The German manufacturers have really impressed with their product since taking over from New Balance in 2020 and next season’s output appears to be just as good.

The website revealed the top after images surfaced on social media confirming that a classic would be reimagined for next season as Ange’s team look to continue their hard work. 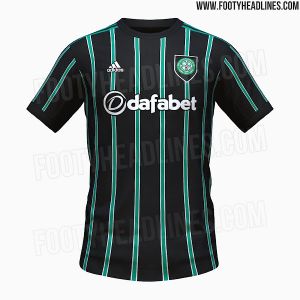 It is a modern take on the 1992 Celtic Away shirt that was produced by Umbro. Fans are still seen wearing this shirt and this is almost certainly going to be a best seller with the supporters ahead of a new season. The club will likely release details for the new away kit along with the home kit in the coming days.

Celtic can seal the league title tomorrow with a point at Dundee United. Tannadice was the same venue that the league was conceded last season and it is fitting that Celtic have gone full circle in that regard.