Brendan Rodgers was unimpressed with the playing surface at Celtic Park during his first remarkable season as Celtic manager. After that Invincible treble winning season Rodgers ruled the roost at Parkhead and was able to call the shots when it came to his ideas for taking Celtic to the next level.

The former Liverpool manager reckoned that the grass surface was not fit for purpose and instead demanded that Celtic install an expensive hybrid pitch similar to the ones used in the English Premier League. The Celtic Board agreed to pitch up with over £2million to fund Brendan’s hybrid pitch on the promise that the football would move faster and make Celtic a more exciting side to watch. Better for the players, the club and the supporters he reckoned.

The installation took place over two summers so we should by now have the most beautiful pitch in Scottish football, especially as no football was played on it from March this year until the summer. 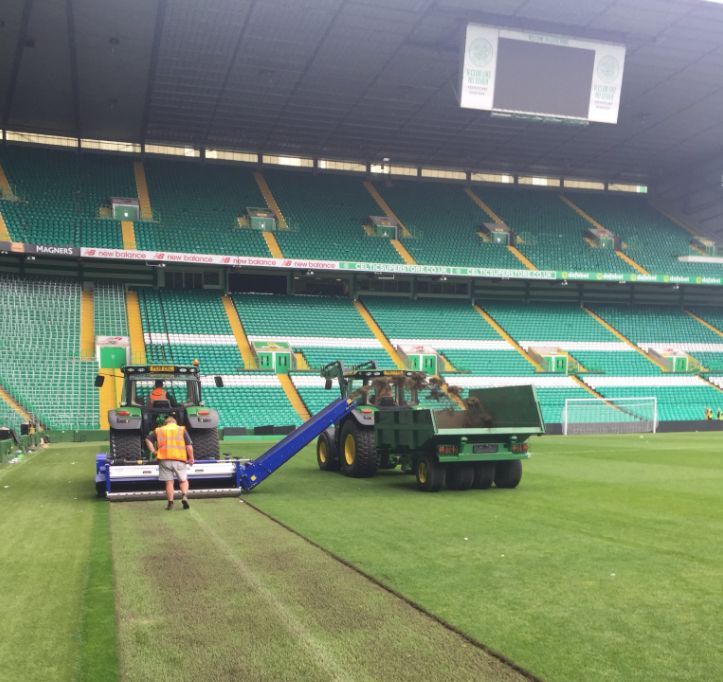 Well did you notice the absolute state of the Paradise pitch this evening in the 2-0 win over Ross County? Highland Paddy certainly did.

“Did Brendan Rodgers take that fancy playing park that he asked for away to Leicester when he sneaked oot the door? Highland Paddy asked, adding, “surface looks abysmal” he added.

In July 2018 – during the second phase of the installation, Rodgers was very positive about what was to come from his £2m plus investment in the hybrid playing surface at Celtic Park.

“I’ve been crying about a pitch for a long time and you see the speed of it and it’ll get slightly quicker as well,” Rodgers said to the media as reported by BBC.

But by 21 January 2019 Rodgers was complaining that his new pitched had been struck down by a disease.

📸 from Celtic Park as work on the installation of a new hybrid pitch solution began this week. pic.twitter.com/8JTgElVRKZ

“It’s just something unfortunate for the ground staff,” said Rodgers. “Nothing that they could have done. It has a slight disease in the surface, which has just been unfortunate really.

“We obviously had a new pitch laid over the course of the last year, which has really helped our game. The guys are working really hard to make that right.

“It’s difficult when you have a spell of games on it. But I’m sure it will get back to the level we would hope it would be at. These are natural things that just take a little bit of time.”

So what has gone wrong with the hybrid pitch Brendan demanded and are Celtic looking to the supplier and asking questions, like the ones being asked by supporters like Highland Paddy?

Where are the rewards that Rodgers promised for the club, the players and the fans? They were certain hard to spot on that awful looking surface against Ross County tonight.