You are at:Home»Latest»SWPL1: Motherwell 0 Celtic 5 – Our Ghirls are back in the Groove

Celtic ended their 2020 league commitments and headed into their Christmas festivities with a commanding 5-0 victory over Motherwell at the Penny Cars stadium this lunchtime. It was a gloomy and overcast Airdrie more akin to dusk than a 12.30 kick off and the early exchanges were to have a similar dullness displayed on the park, but by the end of the game a stuffy Motherwell side were soon gift-wrapping opportunities for Celtic. 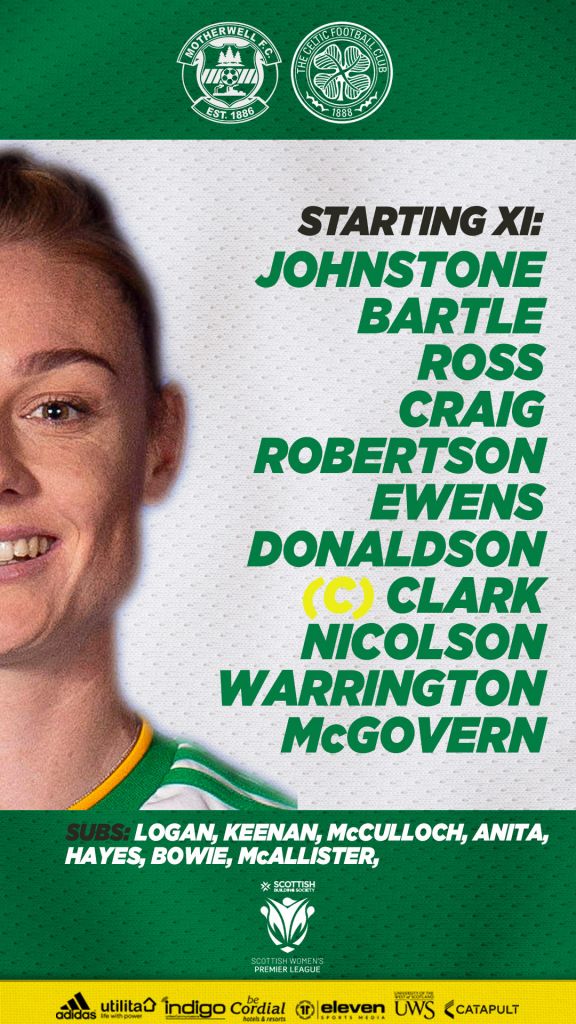 Celtic in the opening twenty minutes struggled to get into a passing rhythm. They were able to play out from defence into midfield but were a little disjointed in the early exchanges in their attempts to get past the confines of the middle of the park.

The midfield it must be said were regularly interrupted by Motherwell’s tactics of breaking up play by committing niggly fouls, but the truth is even when Celtic got past that, they forced the issue a little too much and seemed to try and hit the forward areas too quickly, rather than adopt the patient play they have become renowned for exhibiting.

Celtic slowly but surely gained a grip in the game however as Motherwell’s Ramsay was forced into saves by both McGovern and Sarah Ewens, while Ewens also had a 22-yard drive go just wide as the Celts started to get into a groove.

The best opportunity of the opening exchanges fell again to Sarah Ewens. As the Celtic wide player received the ball inside the box her first touch wasn’t up to scratch and as the ball fell behind her the winger had to dig the ball out from under her feet, impacting on Ewen’s ability to get her bearings, and she turned a gilt-edged chance wide of the post.

Three minutes later and Celtic should have been awarded a penalty as McGovern went down having latched onto a clever ball from Nicolson. The referee waved play on though despite a clear clip of the heels. McGovern looked frustrated and the ‘Well full back guilty, but the referee saw something entirely different from everyone watching on.

Within two minutes Celtic had the ball in the net. A brilliant effort created by McGovern saw no little amount of skill to create the chance that was struck well but came off the post, Donaldson following up should have scored but skewed the chance off target, Natalie Ross then managed to poke out a foot to redirect the wayward shot into the net, but was rightly flagged for offside.

Celtic however did go in at the break with a goal they very much deserved for twenty minutes of solid pressure.

A lovely and delicate lay off from the impressive Natalie Ross fed the oncoming Lisa Donaldson who struck a beautiful effort on the half volley from 20 yards into the bottom corner of Ramsay’s net. Celtic’s November player of the month nominee has been in superb form in recent weeks and that finish certainly reflected the confidence Donaldson is playing with this season.

There was a further chance right on half time for Celtic to grab a second but Ewens effort from distance flew over the bar.

But Celtic were clicking now and 1-0 at half time was the least they deserved for their efforts, whilst Motherwell were looking like they really needed a coaching pep talk and an opportunity to regroup. 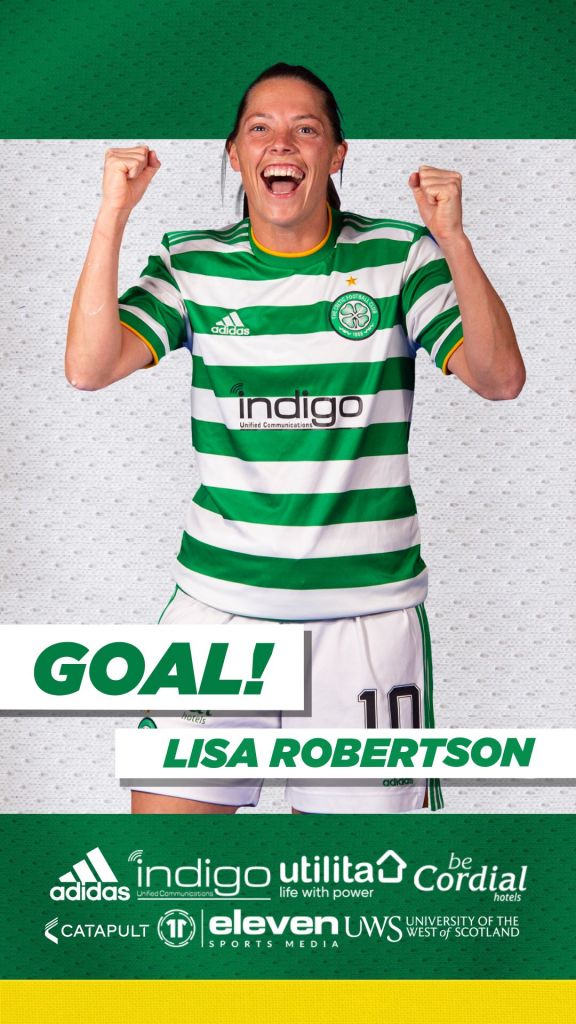 Whatever was said to the Motherwell players at the break made little impact as the second half started with the same incessant pressure from Celtic as they had ended the first.

The Celts were 2-0 ahead eight minutes into the second half when Sarah Ewens latched onto a superb through ball that bypassed three Motherwell defenders forcing ‘keeper Khym Ramsey to come off her line and try and close down the angle on the advancing Sara Ewens. Ewens however had timed the run perfectly, just as she did with the finish, delicately chipping Ramsay to double Celtic’s lead.

And within five minutes it was three without reply for the Celts. Natalie Ross showed amazing commitment to chase the ball to the by-line and wrap her foot around it and in turn supply a wonderful hanging delivery that Donaldson guided perfectly into the back of the net by way of a cushioned header. 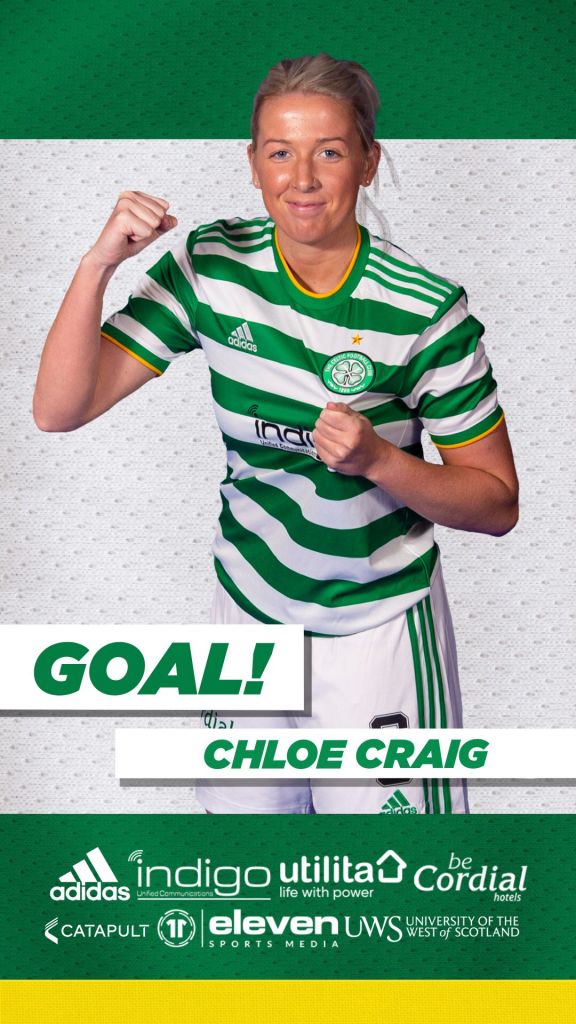 By now Motherwell were struggling to keep pace with a Celtic team with their tails well and truly up. A fourth goal arrived when substitute Anita showed real determination to get the ball back to the edge of the box, it then broke kindly for Chloe Craig who finished with a sweetly struck drive into the bottom corner. 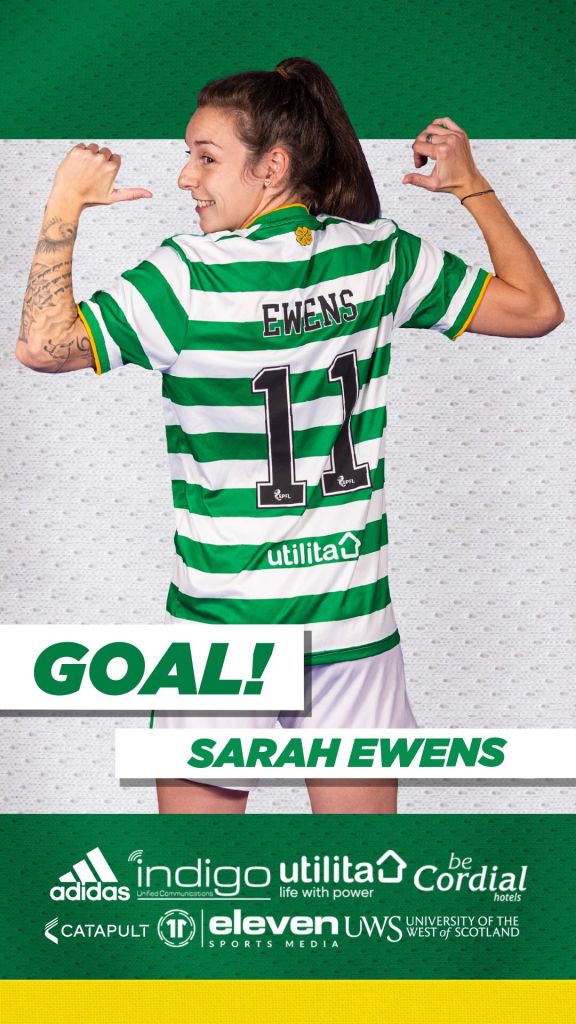 By now the game was over for a Motherwell team struggling to maintain their pressing game and Sara Ewens was soon to add to their misery with a brilliant finish on her weaker left foot as McAllister broke Motherwell’s tired defensive line with a perfectly weighted pass. It was the last of the goals and saw the Celts pick up a well-deserved three points.

After a tough battle in the first half Motherwell’s resistance was broken with a timely goal scored just before the break. From then on Celtic put in a controlled performance and go into the Christmas break with five wins a draw and a defeat, on the back of four goals well taken but somewhat gifted to the Celtic defence by a Motherwell defence lacking in confidence.

That is something Celtic won’t be lacking when they head into the second half of their SWPL1 season next month.

This is a team who have only tasted defeat to 13 times champions Glasgow City and have played all their main rivals away from home.

Fran Alonso is unlikely to say it in public but this is a Celtic team who will be looking to put up a title challenge once the Christmas break has passed.

For now, the Celts have earned their break and have given us all some very welcome festive cheer. Today’s opponents however may well not be quite in the Christmas spirit just yet, despite the generosity shown to Celtic this afternoon.

Sarah Ewens will get the plaudits for a superb player of the match performance today, but a special mention must go to Lisa Robertson. It seems she simply never has a bad game.