You are at:Home»Latest»SWPL1 Preview, Motherwell v Celtic: A Big Win is on the Christmas Cards

Celtic head into their final SWPL1 fixture prior to the Christmas break, looking to see out 2020 with not only a win but a comfortable one at that.

Celtic face Motherwell tomorrow – in a game you can see on BBC Scotland website at 12.30 – on the back of a point stolen at the death against Forfar Farmington last weekend.

Celtic not only face a Motherwell side thumped by nine without reply by theRangers last week but also a side that could prove to have a bit of an insight when it comes to all things Celtic.

The reason for that inside knowledge will be sitting in the opposing dugout where previously he had plied his trade and cajoled Celtic from the sidelines. A position now filled by Celtic’s head coach Fran Alonso.

💫 🔟 @LisaRobertson92 has been nominated for the @_ScottishBS @SWPL player of the month for November!

You can vote for her here ➡️ https://t.co/AxkZbI8bM2 Voting closes 12pm on December, 14th#COYGIG pic.twitter.com/WKSnKShjKX

This will be the first time former Celtic head coach Eddie Wolecki Black will face up to the side he previously managed and it’s something that will add an extra spice to tomorrow’s lunchtime meeting.

On paper Motherwell look like the perfect side for Celtic to get a few goals against and see out 2020 with a confidence inspiring win, indeed their respective records make this look like there can be only one winner. Yet scratch the surface and it may not quite be the penalty kick Celtic would be hoping to get.

Motherwell lie in 7th place in an eight-team league with only Hearts below them. They have won only once this season, have managed only five goals and conceded a whopping 24.

Conversely Celtic sit third in the title race, have won four, drawn one and only tasted defeat to Glasgow City on the opening day of the season. The Celts so far have scored an inspiring 20 goals and have conceded just six.

When you consider Celtic have only played twice at home in the league this season and have played Glasgow City, theRangers and Hibs away from home, it makes Celtic’s start to the season all the more credible and one where, with a win tomorrow, they could be in the perfect position to kick for the finishing line when the league resumes next year.

But Motherwell have shown in glimpses what they are capable of. They are also a side under the former Celtic coach who have seen a huge turnaround in playing staff and are very much still feeling their way into a season still in its infancy.

Had to tweak this as I made a wee factual error in the last one! The fact remains…what a player 👇 https://t.co/nWVAFwpNOO

The big warning sign for Celtic, and one head coach Alonso will be very much aware of, came in the ‘Well’s encounter with Glasgow City. That was game where Mothewell’s stubborn resistance saw them hold off the 13-in-a-row champions for 70 minutes before they finally succumbed.

Deep lying defences have been something that Celtic have in the main coped with but when they have it has taken single goal victories against Spartans and in the Glasgow derby to prevail, whereby last weekend Forfar’s counter attacking style almost saw the Celts come a cropper.

With Motherwell likely to play the same way and Celtic having rocked a little last weekend it’s clear that tomorrow’s encounter is far from a gimme.

Celtic of course will be confident. The form of Summer Green in particular means Celtic have a key that can unlock defences, while Sarah Ewens is the class act in the wide areas that can get behind defences.

Add to that the steal and guile of Lisa Robertson and Natalie Ross in midfield and a goalkeeper without peer in Chloe Logan, it’s fair to say that Celtic’s players will probably sleep a little more comfortably than the likes of Khym Ramsay in the Motherwell goal.

But that nagging doubt may well come in the form of the former coach of many of these Celtic players.

Football as they say is a funny old game and although Celtic have new additions Eddie Wolecki Black will know both the strengths to counter and the weaknesses to exploit in many of the Celtic team, as well as having an axe to grind himself of course. 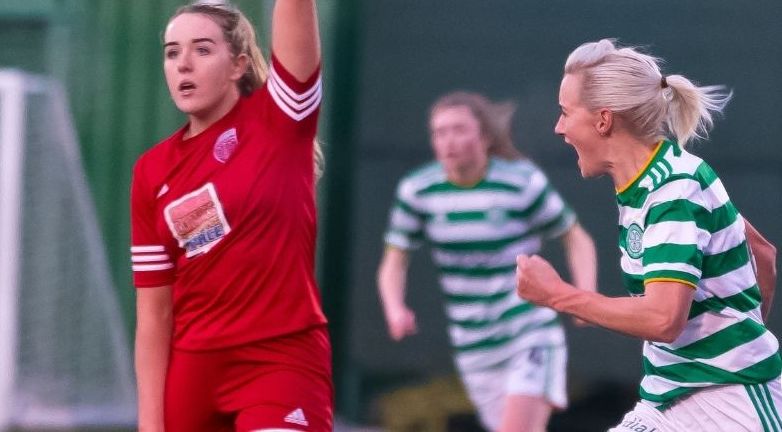 Despite all that Celtic could and should win tomorrow’s encounter comfortably, at least they should if they are to have realistic expectation of fighting for the title and Champions league football next season.

Fran Alonso has shown himself to be a tactically astute manager this season and will have been wise enough to tap the brains of his own players as to ex-boss Wolecki Black’s approach to football.

Alonso and his side will also have a point to prove after needing the late, late show to grab a point from a game they were expected to win comfortably last week.

There is no such margin for error this time around. Anything other than three points will be a major setback in Celtic’s title hopes. Ex-manager or not this is a game Celtic have to win, standards set and glory targeted simply dictates it.

The SWPL 1 encounter between Motherwell and Celtic from the Penny Cars Stadium in Airdrie will be live on the BBC Sport website and app. Kick-off is at 12.30.

Previous ArticleCeltic v Kilmarnock: Soro, Turnbull and Lennon Reading the Room
Next Article The dangers of being ‘Cute’ for The Celtic Trust and our “pretty phenomenal” problem