Earlier this month, Scottish Football was condescended upon (yet again) by English Football League stalwart Jamie O’Hara, who in another attempt to sell views for the nonsense-spouting radio outlet that is Talksport, ultimately gave off the opinion that Scottish football is, essentially, worthless.

O’Hara, with a trophy cabinet boasting an impressive one Football League Cup with Tottenham Hotspur – in which he played two games – now plays for mammoth National League South outfit Billericay Town, who famously reached the First Round of the FA Cup last year – how outstanding!

Now, he may have a claim in terms of current ability. Fulham are a good footballing side, and that is exemplified by their 1-1 draws against both Tottenham and Liverpool recently, However, what the Essex-born veteran fails to acknowledge is that the Londoners’ made a £100m outlay on transfers in the 2018 summer window, which *checks notes* Celtic have not spent in the last eight years, combined. And that is without player sales which total over £50 million for just Kieran Tierney and Moussa Dembele – a former striker that Celtic bought from Fulham for £500,000.

So how on earth would they cope with the paltry £1.2m given in prize money to the winner of the Scottish Premier League every year, to say that English Premier League clubs receive over 100x that amount? They would have to rely on ticket sales – and in a 25,000 seater stadium such as Craven Cottage, you’re then only going to rake in half as much revenue at the Glaswegian teams. Keep up, Jamie.

And, as much as it may (or may not) surprise you, given that it is another obnoxious TalkSport opinion, Adrian Durham has not only somehow one-upped Jamie O’Hara, but he has blown him out of the water with an outrageous claim that, given their Dubai debacle and Under-18 furloughing scenario, Celtic should be demoted – by being relagated to Scottish League Two. 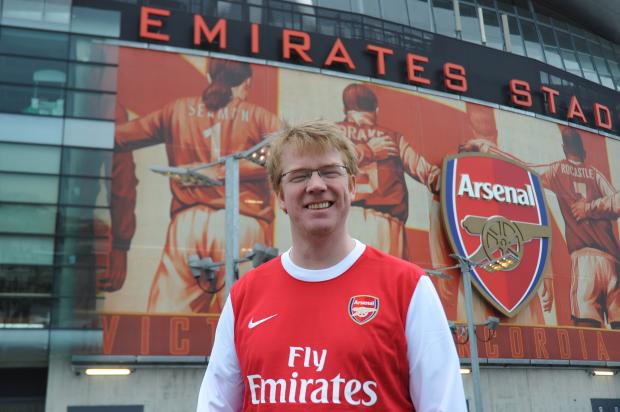 It is little wonder Adrian Durham refuses to acknowldege Arsenal’s impact on COVID-19 – as the self-proclaimed Peterborough United fan dons the Gunners’ shirt.

Yes, you heard that right.

Not to tell a story, but there has only been one demotion from the Premiership to League Two in the 21st century. And that falls under the crooked, conniving, tax-avoiding heartlessness that theRangers knowingly undertook in the 1990’s.

What theRangers did was quite literally bending the law, and once they faced repercussions for their actions, they rightly paid the consequences.

So now begs the question that I propose to Durham; what is worse? Avoiding taxes of well over £50 million pounds in order to try to dominate Scottish Football, or the alternative of not even breaking a COVID-19 rule – as the Scottish Government actively allowed Celtic to travel to the UAE – alongside furloughing their under-18 academy until the start of March?

Does Durham not seem to remember Benjamin Mendy, Sergio Regullion and Giovani Lo Celso’s actions at the turn of the year? These parties that the English Premier League players went to ultimately meant that some fixtures were postponed for a couple of weeks. The same goes for Luka Milivojevic and Aleksandar Mitrovic, who were both seen partying together despite being at different clubs in Crystal Palace and O’Hara’s favourite side Fulham respectively.

Mohamed Salah did something very similar whilst at a party in Egypt, too – but nothing will be said about that.

How about Salah’s club then? How about the English club and subsequent media darling Liverpool? Who actively furloughed their non-playing staff when the season was suspended in early April, despite making obscene amounts of money the season prior given their success in the UEFA Champions League?

How about Arsenal, who in August last year made 55 staff redundant – and then proceeded to sign failing Brazilian winger Willian on a 3-year deal for a reported £220,000 a week? If Celtic were to pay someone £220,000 a week for 36 months, , they’d have gone bust already, that’s for sure. But Arsenal can’t help out the old cliched Doris the tea lady because they’ve decided to give an already deteriorating footballer a 3-year deal? That’s the real crime here.

Durham goes on to say: “Celtic are out of touch”. Correct.

“Am I right in thinking Scotland has had enough of Celtic Football Club? In the whole scheme of things, what Celtic are doing now is far, far worse, far more insulting to the fans and to football and to the whole nation than anything Rangers did nine years ago.”

Celtic returned from Dubai with ONE positive COVID-19 case, in what was undoubtedly an extremely regulated trip abroad with as many careful procedures in place as possible, with a green light to travel from the authorities above. Meanwhile, Mohamed Salah and the rest of his merry family danced away in the Egyptian sun much, much less than two metres away from each other, and the rest of his hard-partying English Premier League co-stars get away with their New Years’ Eve misdemeanors scot-free. It just screams hypocrisy.

As for the Under-18’s, he has a slight more legible claim – but, at the end of the day, we are in a global pandemic, where the majority of UK businesses aren’t receiving as much income as per usual – and for a football club that bears 60,000 fans every fortnight, that is a huge loss in ticket sales.

Bear in mind that this is exactly what Liverpool and Arsenal did, with the latter sending 55 members of their staff on furlough. Are there 55 under 18 players at Lennoxtown? No chance.

“So wouldn’t it be fitting, wouldn’t it be right, to demote Celtic to Scottish League Two after all this nonsense? Punish them for bringing the game into disrepute, showing contempt for the very people whose money keeps the club going in normal times”, Durham evaluated.

If that’s the case, then perhaps we demote half of the English Premier League for their absolute fiasco’s that they’ve created. And then we’ll see if Jamie’s hypothesis of Fulham winning the Scottish Premier League comes true, when they’re demoted to the National League due to Aleksandar Mitrovic’s COVID-flouting disco dancing, and have to sell the majority of their club

Durham finished: “Who’s with me? Demote Celtic to Scottish League Two, are you with me?” to Darren Gough – the former England cricketer. And, even despite his loyalties to the English Leagues and acknowledgement that Celtic’s behaviour has been disgraceful – which, it could be argued is true – even a former cricketer can look past Durham’s resentment and tell him where to get off.

I’m not sure if it is all for clickbait, or to enrage fellow writers like myself who then spend time deciphering just how someone can come up with that decision and justify saying it on national radio. But if clowns like O’Hara and Durham are allowed to consistently spout, patronise, condescend and sneer towards Scottish Football in the future – in a company who hold a huge, huge stake in terms of being listened to in the public eye – then quite frankly, as a young journalist who could undoubtedly do a better job than the two clowns that run the circus that is TalkSport, I think I may be in the wrong business.

And that’s as an Englishman myself.