You are at:Home»Latest»Team confirmed for Celtic vs Ross County: Reward for positive Europa performance and Frimpong starts

It’s always hard to tell if it’s better to rest players when there’s a short turnaround in games, or if positive momentum will be enough to get them through the game.

In the case of Lewis Morgan, he’s barely played this season so it makes sense to keep him in the team after a goalscoring performance against Rennes on Thursday. There’s still no sign of Odsonne Edouard while Griffiths starts on the bench so it looks like Morgan will get another chance through the middle.

The full line up for today’s game against Ross County looks like this:

Here’s how the Bhoys will line up against @RossCounty! 🟢⚪️ pic.twitter.com/Zxkm2Thd9L

The inuries to Bolingoli and Jonny Hayes mean that Greg Taylor was almost an automatic choice to start, but that might not be a bad thing. We need to see him get a regular run of games to help him settle in and judge if he’s ready to play a big role at this point.

He will also be helped by the sight of James Forrest and Jeremie Frimpong on the opposite wing. Ross County will need to focus their efforts on defending that flank, so Taylor should have some room to operate.

The presence of Tom Rogic also suggests that Ryan Christie will be pushed onto the left flank. It’s possible he and Lewis Morgan will interchange throughout the game, but they should have some joy against this County team. 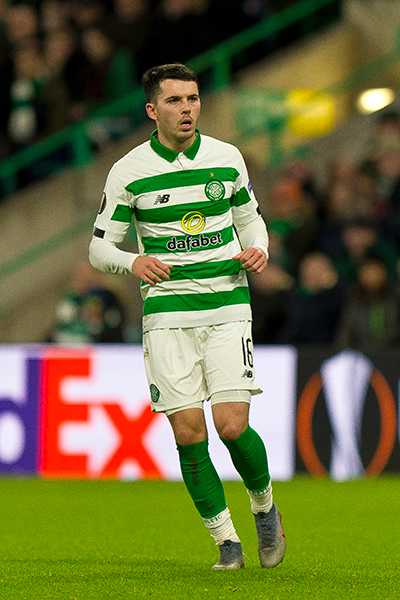 Only a truly terrible St Johnstone defence have allowed more goals than The Staggies this season, so there should be plenty of goals for Celtic today. They lack pace and some basic organisation at times in their defence, so it’s a huge chance for someone like Lewis Morgan to pounce and further stake his claim for a regular place in the team.

So Neil Lennon goes with Tom Rogic and Jeremie Frimpong both returning to the side after not featuring during the week against Rennes in the Europa League. The Australian was an un-used sub while the Dutch under 21 star was not registered for the Group stages as his signing wasn’t completed in time.

Olivier Ntcham is not even on the bench – hopefully there no injury there, just a knock. Moritz Bauer is on the bench and makes way for Frimpong as expected.

Fraser Forster is in goals. The back four is Frimpong, Jullien, Ajer and Taylor. Brown and McGregor are in their usual roles in the middle of the park. The offensive midfielders are Christie, Rogic and Forrest, presumably playing on the left, and Lewis Morgan leads the line after his fine showing on Thursday night.

Previous ArticleGet Bitton Done – ‘We don’t want him to run down his contract,’ Lenny sends clear message
Next Article Photo: The likeness between Brendan Rodgers and Kojak is uncanny