You are at:Home»Latest»Team News: Hendry and Kouassi Return

Celtic’s Reserves face Motherwell in Game Four of the SPFL Reserve Cup this afternoon and a couple of players that will be keen to impress first team manager Neil Lennon have been included.

Fringe players Eboue Kouassi and Jack Hendry have joined the Reserve team in an attempt to bolster their chances at either earning a call-up to the first team or securing first team football elsewhere as January approaches. 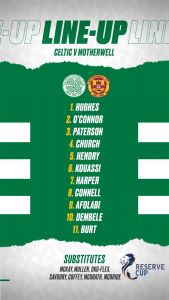 The youthful team includes prospects like O’Connor, Burt, Afolabi and Dembele who will also be hoping to catch the manager’s eye.

Hendry was sent off in a bounce game versus Brentford last week and has struggled to impress Neil Lennon since arriving back at training following an injury. He was signed for £1.5m as part of some bizarre business by Brendan Rodgers and Lee Congerton.

Meanwhile, Kouassi hasn’t been seen since the Betfred Cup semi-final versus Hearts at Murrayfield when the midfielder attempted to run off an injury, which later was confirmed as a cruciate ligament injury to his knee.

Hopefully the players get an ample run out and the manager can cast an eye over them with the transfer window in mind as well as the nine games ahead this month for players like O’Connor.